I discovered the videos in January. One of the first I saw was posted by the irreverent online car magazine Jalopnik. “Dangerous Idiot Sleeps While Driving His Tesla on Autopilot,” read the headline. The cellphone-captured footage did, as promised, appear to show a man snoozing in the driver’s seat of a Tesla as it zipped along a road somewhere outside Las Vegas. And because the man was asleep, it was safe to assume that navigation was indeed being handled by the car’s onboard driving-assistance system, which is called Autopilot.

A few similar videos had been bouncing around the web for a while. But this year they had their moment: More and more appeared, drawing more and more attention. Other than minor variations in the background — the Massachusetts Turnpike in one, the 405 in Los Angeles in another — these clips are mostly identical. A person is holding up a phone, registering the skin-tingling oddness of what is being seen through the window of a neighboring car. You can feel, somehow, the distance between the cameraperson’s shock and the Tesla driver’s unconscious calm. Sometimes there’s commentary: “I think this guy is, like, passed out in his Tesla.” “He’s totally asleep.” “Wake up!”

It would be hard to overstate these clips’ visceral strangeness. One of the most recent videos, captured in October on a stretch of Interstate 280 in California, was shot by the driver of what appears to be a Toyota Prius: 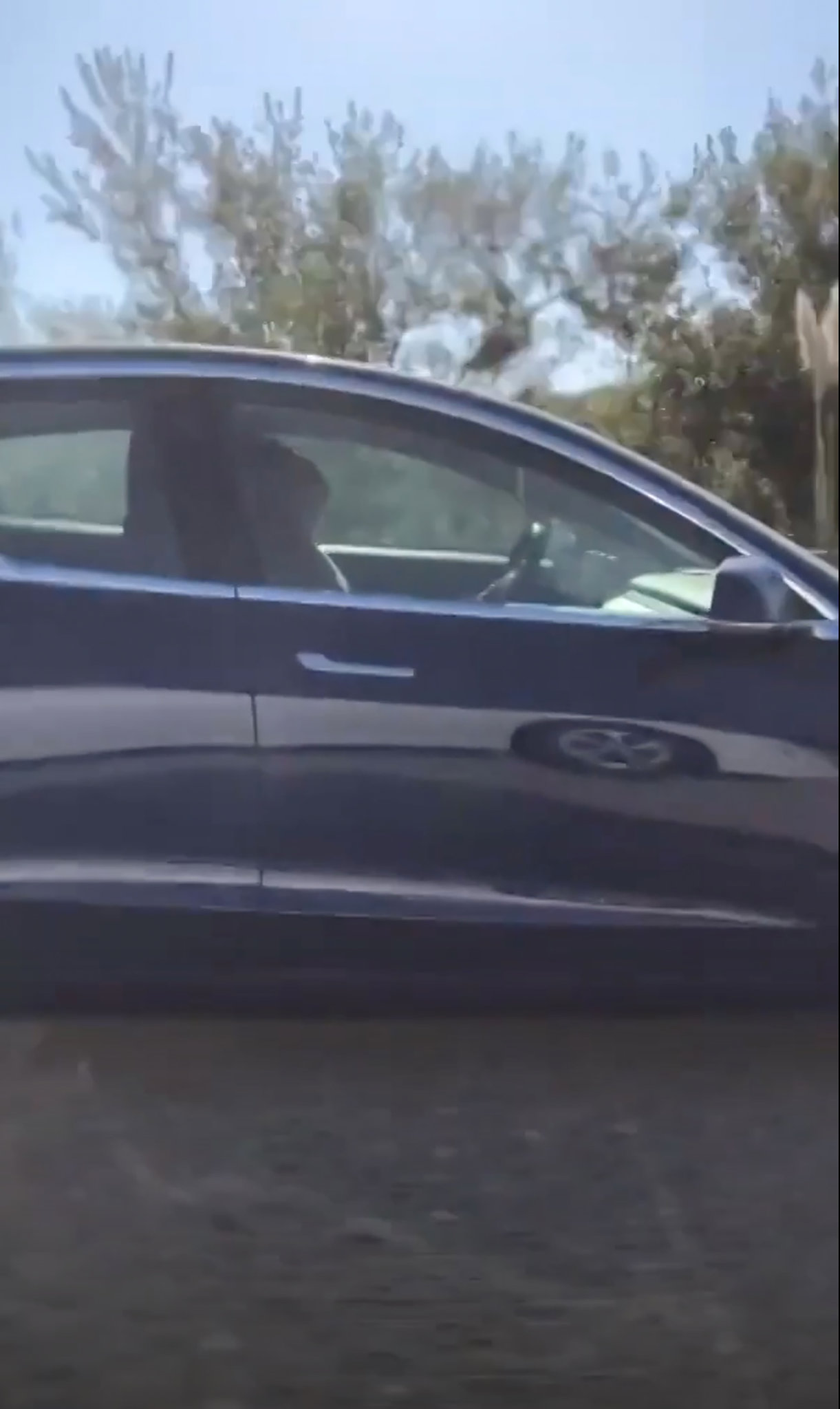 After a Tesla passes him, he gives chase, phone in hand. We see the Tesla driver’s head tilted way, way back. We see the sun streaming through the window, feel it whispering, “Nap, nap, nap.” We see the landscape whipping by, the concrete barrier mere feet away. He looks asleep, he’s not waking up and he’s behind the wheel of a vehicle moving at highway speed. We hold our breath, waiting for the inevitable disaster that somehow never comes. Our perceptual template for “car moving down road” contains, it seems, a fixed slot for “conscious driver.” Seeing that slot repurposed for a nap takes a familiar tableau and scrambles it into something uncanny and charged with menace. The cellphone quality only heightens the effect: It’s like those scenes from disaster movies in which stone-faced government officials review low-quality footage of an alarming new threat.

Tesla’s response to these videos has been consistent: Autopilot is meant to function as a complement to a conscious driver, not a replacement. If you don’t keep a hand on the wheel, your Tesla is supposed to beep at you; eventually it’s supposed to slow to a stop and put its hazard lights on. Anyway, who knows if these clips were real? Couldn’t some of them be the work of pranksters? But of course you can still fall asleep with a hand on the wheel — or you can go on YouTube and watch Tesla drivers swap tips for using a water bottle or custom “cellphone holder” to fool the system. Tesla’s own public stance on Autopilot has been muddled, with the company sometimes issuing statements that the cars possess “full self-driving” capability. As recently as 2016, the company posted video of a hands-free highway journey from a home to a parking spot outside a Tesla office, complete with a proud preamble: “The person in the driver’s seat is only there for legal reasons. He is not doing anything. The car is driving itself.”

What’s fascinating is the way the sci-fi novelty of Autopilot — combined with the deep familiarity of old-fashioned driving — manages to warp our danger-detecting radar. There are instances in which investigators have found that the Autopilot system contributed to crashes, but none of those have been captured on film. Besides, driving is already one of the more dangerous activities Americans undertake on a daily basis. According to the National Highway Traffic Safety Administration, “drowsy driving” was a factor in 91,000 crashes, resulting in 50,000 people injured and 810 deaths in 2017, so it’s theoretically possible that what some of these videos are showing us is disaster averted, not disaster in motion. (It’s also not a great idea to try filming what other people are doing on the road while you yourself are trying to drive on it.) There’s no video genre of people sleeping in cars like my 2010 Honda Civic for the simple reason that, if I fall asleep in my 2010 Honda Civic, I’m going to crash before anyone has time to pick up a phone.

And yet: Tesla Sleeper videos are undeniably anxiety-inducing. The reasons for this may have as much to do with trust as with the mechanics of driving. Tesla once generated widespread good will by promising affordable electric cars that would make the world cleaner and safer. But over time, its image was tarnished by missed deadlines, worrying crash reports, signs of a cultlike corporate culture and a chief executive, Elon Musk, who habitually exaggerates progress while announcing extravagant new ideas. This was hardly the institution you would want determining the future of highway safety.

As with Tesla, so with tech in general. Until recently, the promise of Silicon Valley transforming everything was greeted with some optimism. Technology was supposed to make the world more efficient, convenient and responsive to our desires — for information, for entertainment, for connection with people who might share our politics or our beds. Even when we didn’t use the latest platform or app, we tended to regard it as frivolous at worst.

Now, though, we have learned to be suspicious. These technologies — and the companies that engineer them — keep turning out to be less benign than imagined. We fell in love with Amazon, but now we miss the local stores it closed. We couldn’t resist the convenience of Uber and Lyft, but now we’ve seen their effect on public transit and drivers. “Jetsons”-esque smart-home technology turned out to be riddled with glitches and vulnerable to hackers. Tech companies have hollowed out old industries, shredded privacy, disregarded regulations and created new vectors for the spread of misinformation and extremism, and now there is a sense that choices we have already made — tectonic shifts already in motion, terms of service already accepted — may be changing us in ways that we are only beginning to process, ready to leap up and bite us in the collective behind.

It’s hard to imagine a more potent visual metaphor for this feeling than a human lulled to sleep inside a hunk of metal and glass, hurtling down a highway under the control of proprietary algorithms beamed on board from Palo Alto. These videos are magnetic not just because of the eerie images they contain, but also because, watching them, we can’t actually be sure what we’re seeing. Is this danger or safety or both at once? Perhaps in a different era we would have cried out in excitement: How cool! Today we are more tempted to gasp in shock and call out a warning: Wake up!