Jess Mackenzie was searching for inspiring before-and-after acne photos when she stumbled on a picture that would completely change her perspective on skin.

It was a model without any makeup on, proudly showing her pimples, pores, and scars. Underneath was a hashtag that Mackenzie, 24, had never seen before: #acnepositivity.

"I spent all night scrolling through photos of real skin," Mackenzie, who lives in Scotland and has had severe cystic acne for the last four years, told Insider. "I felt very overwhelmed, like I had found a whole new Instagram."

After that, Mackenzie became an acne positivity influencer in her own right, sharing her story with more than 19,000 followers. She talked to Insider about her journey with her skin, and how she finally learned to be comfortable in it.

Jess Mackenzie never had any acne as a teen, but that all changed when she turned 20. 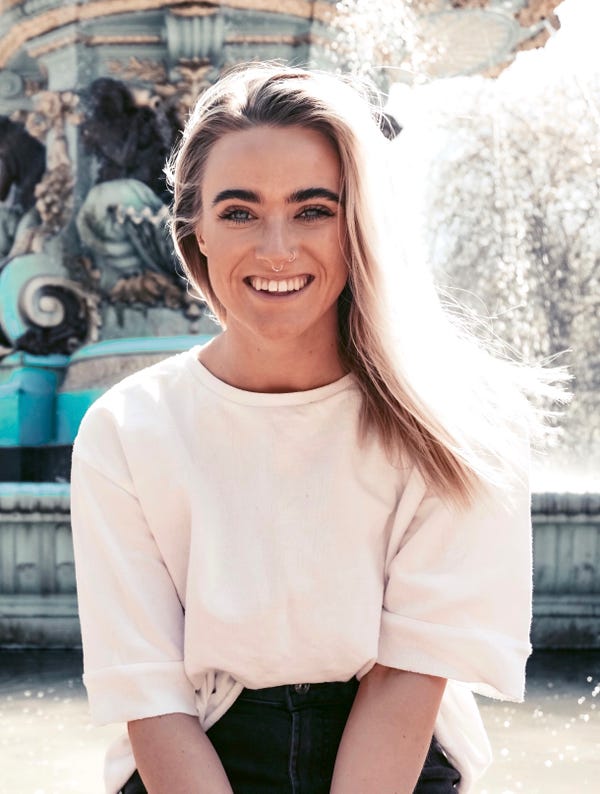 "I started getting some regular hormonal spots," Mackenzie, now 24, told Insider. "By 21, the spots were only multiplying — and making me feel very self-conscious."

Mackenzie, who lives in Edinburgh, Scotland, decided to see a doctor, who diagnosed her with mild acne and prescribed topical solutions.

"Over two years I tried and tested every possible topical medication, but it was only getting worse," she said. "After those two years, I was diagnosed with severe cystic acne." 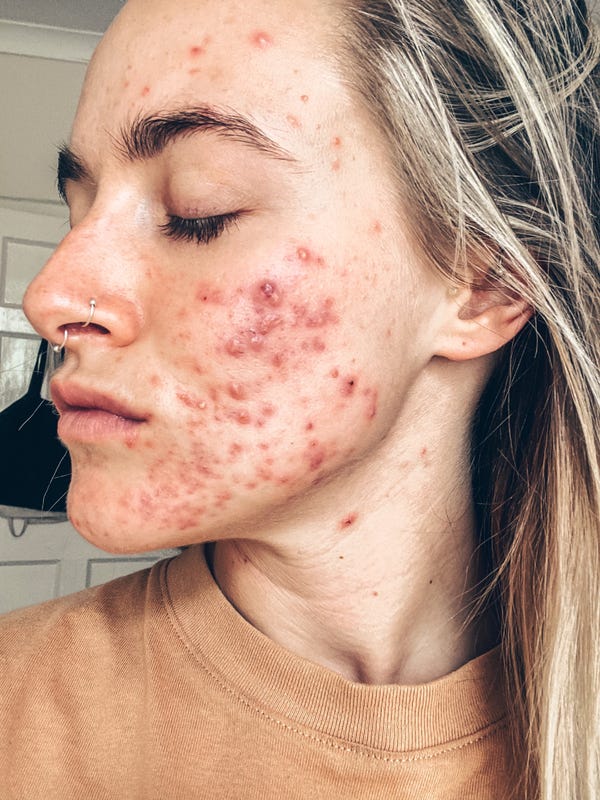 There were days where Mackenzie felt like she couldn't even recognize herself.

"I'll be honest, I cried most nights — partly because of how I looked in the mirror," she said. "I would constantly compare my skin to my friends and strangers passing on the street."

Mackenzie said she got "caught up in the whirlwind of social media," where she found it hard to be her true authentic self. 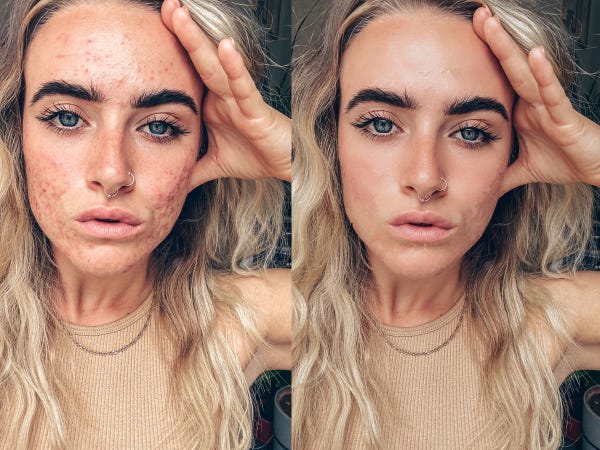 "I'll be honest, I edited my photos in the past because I was ashamed of the skin I was in," she said.

"We spend our days viewing images of girls with flawless skin. So when we look in the mirror and see anything less than that, of course it's going to affect us all mentally."

Mackenzie was feeling stuck on that fateful night when she went searching for acne success stories on Instagram. 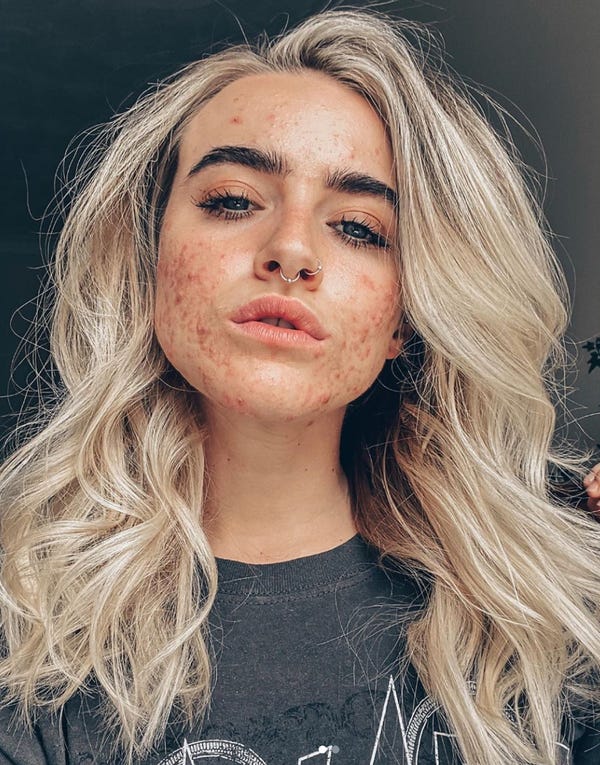 "I believed there was no way out," she said. "So I looked up 'acnebeforeandafter' to see other people's transformations."

Mackenzie was struck by the model's unfiltered and unedited image. And the #acnepositivity hashtag led her to even more inspiring photos.

Suddenly, Instagram felt like an "authentic platform," she said. One where acne was made to "feel and look so normal and beautiful."

"Their stories made me feel safe," Mackenzie added. "And not alone."

A few weeks later, Mackenzie decided to share her own unedited photo. 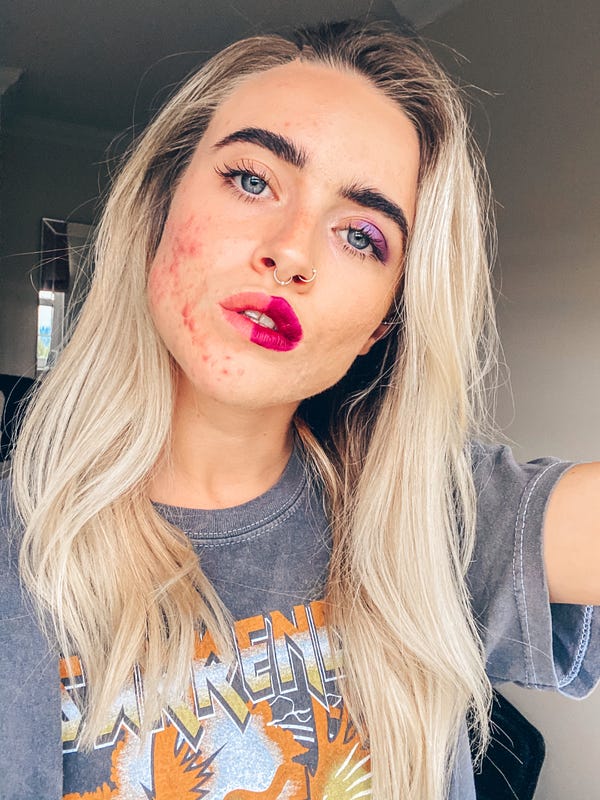 "I came home from a shopping trip, face thick with makeup," she recalled. "It was itchy and uncomfortable. I started wiping my makeup off one side of my face and I stopped and stared for a while. For the first time ever, I genuinely preferred my bare face staring back at me in the mirror."

Mackenzie said she realized that although both sides of her face looked different, they were each "very vulnerable in their own way."

"One side trying to hide, the other searching for self-acceptance," she added.

Mackenzie took a photo of her face and spent all night trying to decide whether she should post it on her public Instagram page. 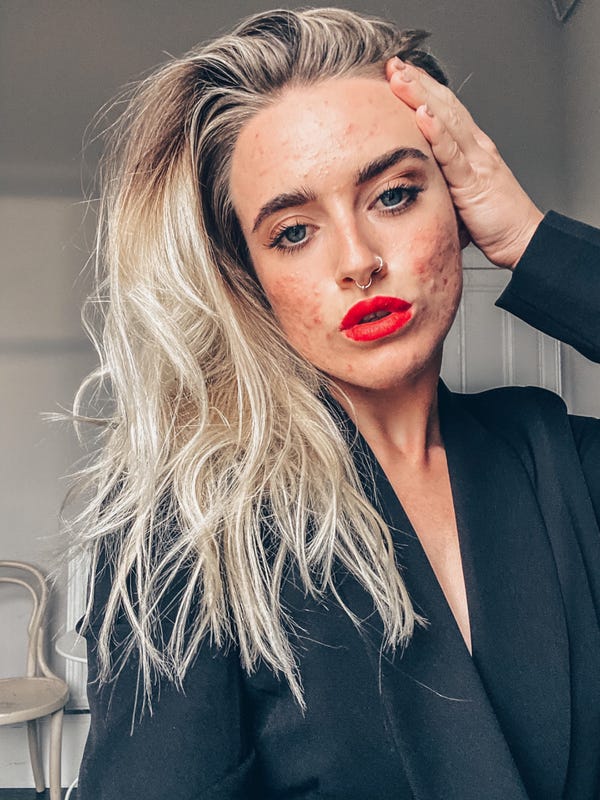 "I knew it would be my way out from the dark side of Instagram editing," she said. "My way to truly connect with the acne positivity community. So I clicked post and instantly stepped from the dark into the light for self-acceptance."

The caption read: "Learning to love both sides equally."

𝐋𝐞𝐚𝐫𝐧𝐢𝐧𝐠 𝐭𝐨 𝐥𝐨𝐯𝐞 𝐛𝐨𝐭𝐡 𝐬𝐢𝐝𝐞𝐬 𝐞𝐪𝐮𝐚𝐥𝐥𝐲 ❣️ ⁣ ⁣ It’s Acne Awareness Month and I want to make one thing clear because evidently… my skin is not. ⁣ ⁣ I’m not posting so I can find out about your magical vegan turmeric paste, your extortionate facial peels, your wondrous super cleanser for just £1.99, or your Arbonne products that ‘clears breakouts in just two days’. Trust me, I‘ve tried it all.⁣ ⁣ I’m posting this to help normalise REAL SKIN! I’m so fed up of feeling shitty about my skin because when I scroll through social media all I see clear, flawless, pore-less, glowy skin pics! I’m thrilled for you all and of course, rather jealous but the harsh reality is the majority of these pictures are heavily filtered, edited or there’s about 7 layers of makeup on to mask your apparent ‘flaws’. ⁣ ⁣ Don’t get me wrong, I love a good filter and I love playing around with makeup and how I feel when I wear it but those days are few and far between. In fact the only time I wear make up is if I’m going on a day/night out or if I’m posting something on social media… but why? Because I’m scared that I won’t be accepted for who I am if I go bare faced? because I’d feel unworthy/ hideous because my skins not the same as all the other girls? ⁣ ⁣ Well to that I say f*ck it! ⁣ ⁣ In the last few weeks I’ve been unfollowing ‘fake’ accounts and following loads of skin positivity accounts so I can fill my home screen and explore page with REAL skin! I’ve learnt so much about myself and about acne and acceptance from this and I hope that one day I can be that for you too! It’s a process though and the first step is: if you don’t like it, I couldn’t give a sh*t 💅🏽 ⁣ ⁣ 𝐓𝐇𝐈𝐒 𝐈𝐒 𝐌𝐄 ⁣ ⁣ I’ll continue to post pictures with make up on but I’m also going to start posting pictures without make up on and share my acne journey with you!⁣ ⁣ ⁣ ⁣ ⁣ ⁣ ⁣ ⁣ ⁣ #acne #beforeandafter #acnebeforeandafter #skinpossitivity #acneawarenessmonth #loveyourskin #adultacne #banishacnestigma #acnecommunity #acnescars #acneproblems #acnejourney #acnesolution #realskin #acnefighter #normaliseacne

Mackenzie said she was sobbing as she read "all the comments of acceptance" from her friends and followers. 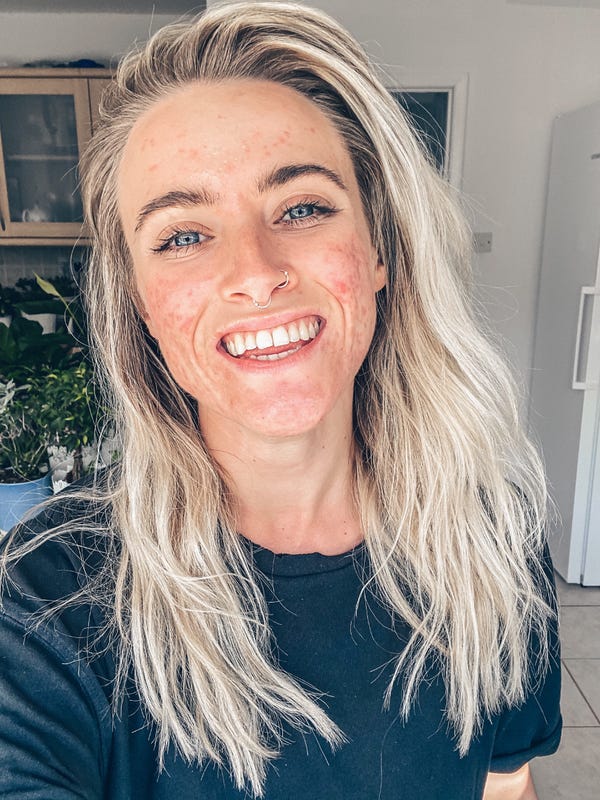 When she first posted the photo, Mackenzie had told herself it didn't matter how people reacted. But she was overwhelmed when she saw the flood of positivity in her Instagram comments.

"It was clear I obviously still cared what others thought," she said. "That in itself is a whole separate journey."

It's been nearly three months since Mackenzie posted that first photo, and she feels far more confident in her own skin. 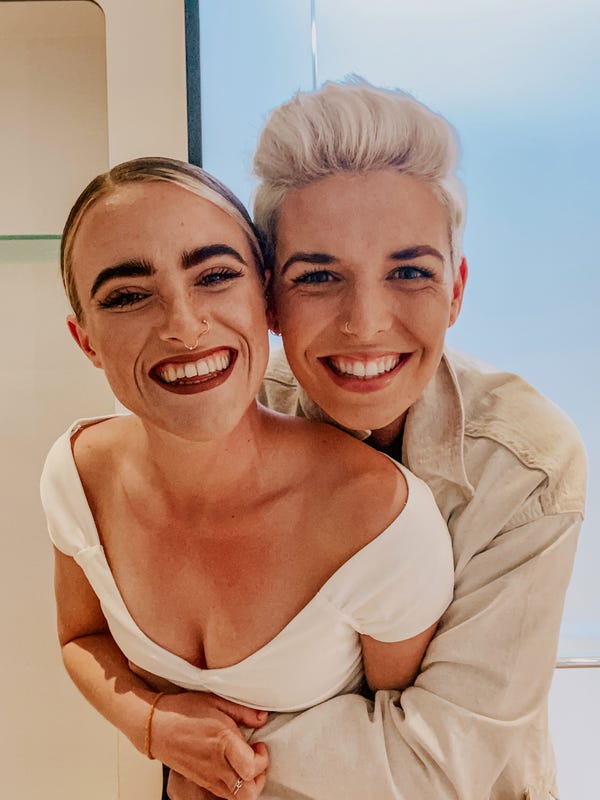 "I've finally found self-love and acceptance," Mackenzie, who now shares her story with over 19,000 followers, said. "I genuinely believe my skin is looking and feeling a lot better because of it. Connecting with the acne positivity community has completely changed my life."

"I now believe beauty is not flawless," she added. "Beauty is being your true authentic self."

As she scrolled through old photos on her camera roll, Mackenzie realized how much her perspective had changed. So she wrote an "apology" to her skin. 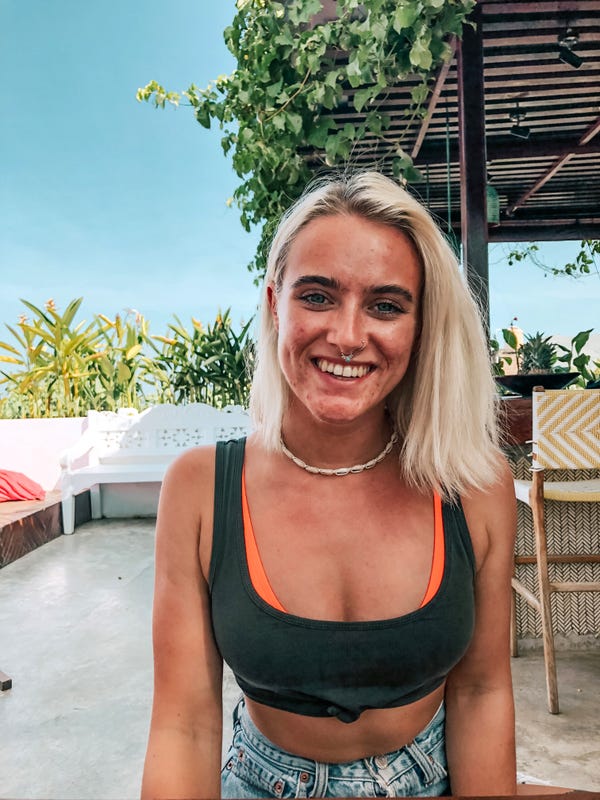 Mackenzie posted side-by-side photos of her current skin with pictures she had found of herself from January 2019.

"I couldn't believe how glowing and healthy my skin looked," she said. "At a time where I actively wore so much makeup to cover it. I instantly felt a deep sense of sadness. That girl didn't know her worth, she couldn't see how radiating she looked behind all of the self-deprecation."

𝐀𝐍 𝐀𝐏𝐎𝐋𝐎𝐆𝐘 𝐓𝐎 𝐌𝐘 𝐒𝐊𝐈𝐍 ⁣ ⁣ I’m sorry I looked at you in disgust. I’m sorry I felt the need to hide you away from the world. I’m sorry I thought you weren’t good enough. I’m sorry I wasn’t patient with you. ⁣ ⁣ 𝐁𝐄𝐅𝐎𝐑𝐄- Jan 2020 𝐀𝐅𝐓𝐄𝐑- July 2020 ⁣ ⁣ In January I was finally in control of my acne from a previous BIG breakout. It wasn’t enough for me at the time. I was annoyed there were still new little cysts forming under the skin. I looked at the pigmentation in anger and the feared the scarring would never go away. ⁣ ⁣ I look back at that version of me and think damn she is GLOWING ✨ but I remember at the time thinking “this isn’t good enough”. ⁣ ⁣ A LOT has happened since January, which I don’t want to get into, that has caused a new BIG breakout. A few non personal things that have contributed has been a change in medication and changing from my regular skin care regime @muradskincareuk (I’m now back on Murad to help me get back to my glowing self again). ⁣ ⁣ This new breakout has taught me to be patient, it’s taught me to be kind to my self and my skin, it’s taught me to love myself and to acknowledge my self worth. It’s taught me to be grateful and that ‘things could always be worse’. ⁣ ⁣ Be kind to yourself little hens, if not karma will come back and bite you in the butt! I don’t have buttne, luckily, but if you do… be kind to that too! ⁣ ⁣ All the love x ⁣ ⁣ ⁣ ⁣ ⁣ ⁣ ⁣ ⁣ ⁣ #acnepositivity #acne #beforeandafter #acnebeforeandafter #skinpossitivity #acneawarenessmonth #loveyourskin #adultacne #banishacnestigma #acnecommunity #acnescars #acneproblems #acnejourney #acnesolution #realskin #acnefighter #normaliseacne #skintexture #selflove #beforeandafter #acnebeforeandafter

Mackenzie said she wanted to write the post to help other people with acne realize that "they're not alone."

"I hoped that my post would speak directly to someone," she added. "So that maybe, just maybe, they could look in the mirror without a cloud of hate covering it."

Mackenzie hopes that, through her posts, she can show others that people with acne can still be happy in their skin. 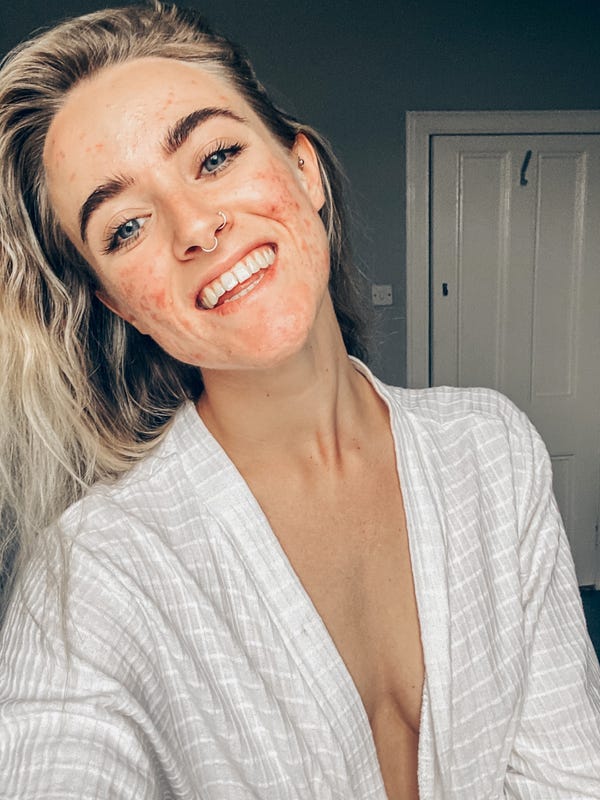 "One thing I wish people were more aware of is that unsolicited advice can be harmful," she said. "By giving advice to someone, you're assuming they have a problem they can't handle alone. If you're to leave the house makeup free or post a photo of yourself, you're only going to do so when you feel great, right? Then someone sadly tells you they can help or fix you. That could be quite disheartening."

"Anyone with adult acne will either ask for advice themselves or already be on a treatment plan," she added. "Please don't give out advice without consent, as it may do more harm than good."

And Mackenzie wants to continue inspiring people to "find self-love and peace with their acne." 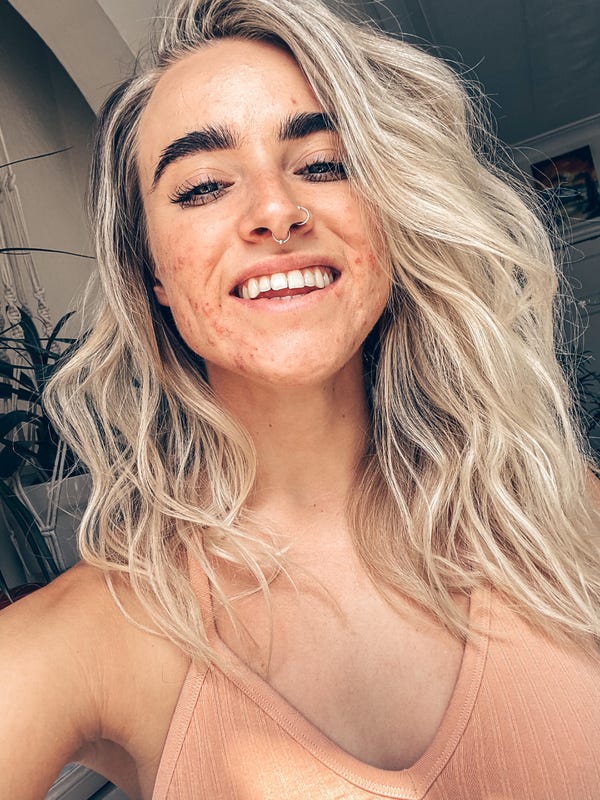 "Perhaps they may even have the confidence to leave their house without feeling the need to layer makeup over their painful spots to please others," she said.

"If I could help someone do that, that would be a dream come true."