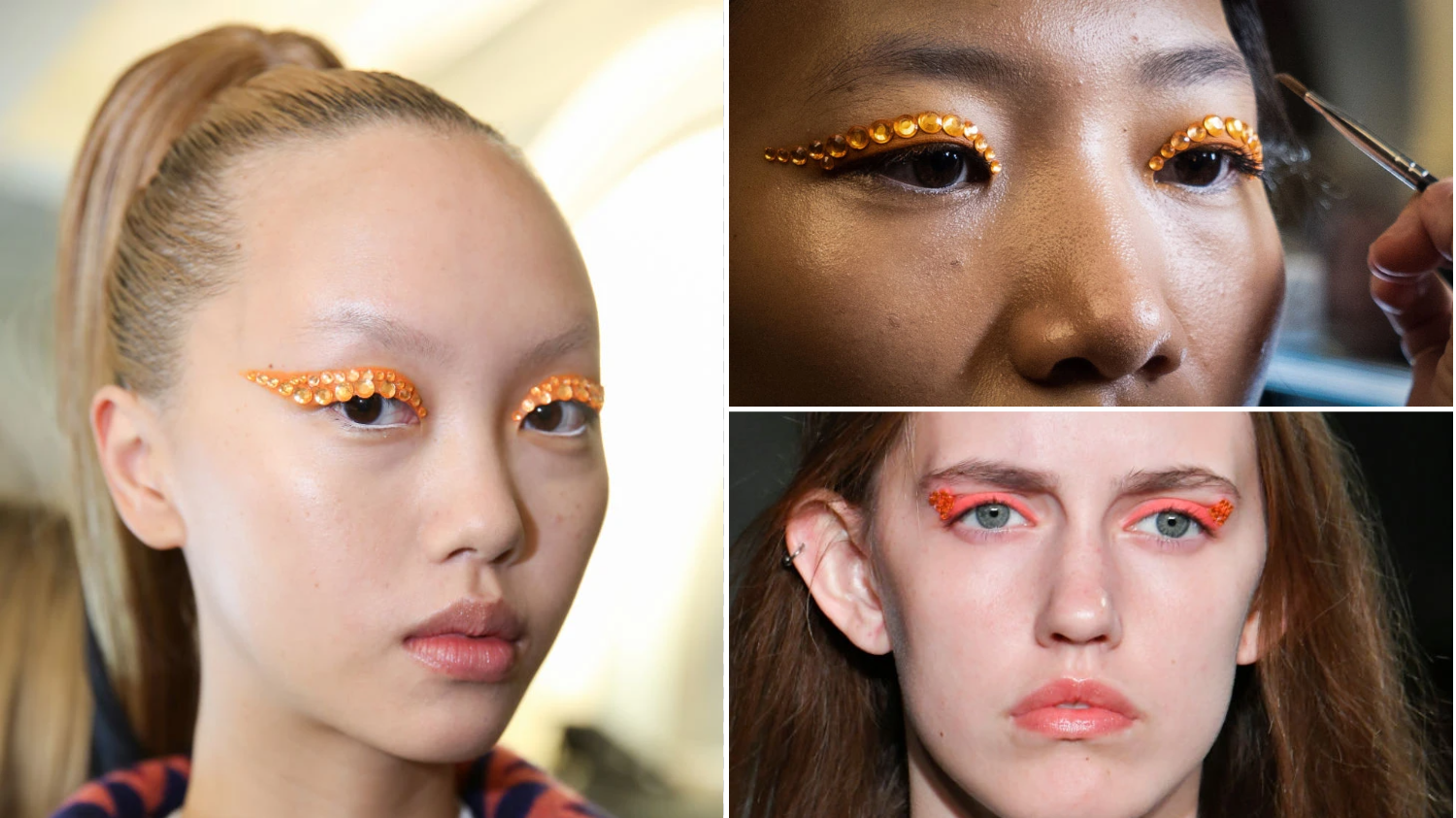 All over the catwalk at Halpern and Paul & Joe London Fashion Week shows, with the runway moments not yet over, huge statement clementine eyes were seen on models.

In an array of colours – pink, pale silver, yellow, red, but with orange taking centre stage – the Halpern show, done by Nars makeup artist Lyndsey Alexander, even used gems over the eyes to enhance the light-catching quality of the look.

Orange has been creeping up in editorial makeup for years.

Once avoided and associated with bad bronzers and garish blusher, it’s now used all over the face – from lips to cheeks to eyes – and seen as a flattering colour against all skin tones.

At the Halpern show, candlelight-glow tones of orange were used, making for a romantic and dreamy take on the colour.

Almost Amy Winehouse-esque in shape, it’s interesting to see such larger-than-life makeup debut for SS23 – a season that typically is associated with colourful, yet stripped back and delicate makeup.

AW22 makeup is going grungy and glam, so this SS23 look appears to be a continuation on AW22 trends by taking the form and size of grunge makeup, but worn in summer tones, like ripe oranges.

Lyndsay said: ‘It was a disco inspired take on a statement eye.

‘Pared back skin, so the sparkle and shine took centre stage.

‘Vivid eyeliners were encrusted in sequins from the collection to create an upbeat vibrant look.

To bring balance to the face if you’re inspired, take heed and tone the rest of the makeup down, so the attention is on the eyes.

A similar style of hyper-liner, extended outwards in place of eyeshadow, was seen on the catwalk at the Paul & Joe show.

Makeup was done by Georgina Graham and used brighter orange hues, some leaning more red and others more yellow.

Ditzy, upward facing flicks came in shades of neon sunset tones, suggesting more of this look are to come.

This summer, colourful eyeliner took centre stage in makeup – thanks to the likes of Euphoria – these LFW shows suggest that trend is going a step further and with greater confidence in untraditional eyeliner shades.

With colourful eyeliner now slightly more mainstream and all over the high street, we might be feeling braver come next spring – and slather highlighter orange shades all over the lid.

Both labels show orange do it all, varying from glamorous and sultry, all the way to fun and playful.