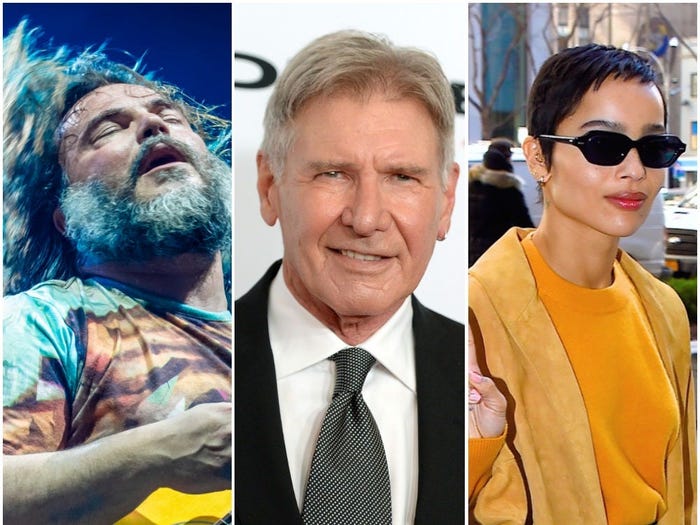 While legends like Larry David, Seth Rogen, and Sacha Baron Cohen have incorporated their Jewish identities into their work, others are more low-key about their Jewish connections.

Stars like Jack Black, Winona Ryder, Zac Efron, and Maya Rudolph are just a few of the celebrities born to Jewish parents, although some of them no longer practice Judaism. Other celebrities, such as Gwyneth Paltrow, converted to Judaism later in life.

Ahead of the first night of Hanukkah, here are 15 celebrities you might not know are Jewish.

Paula Abdul took a "magical and emotional" pilgrimage to Israel when she was 51. 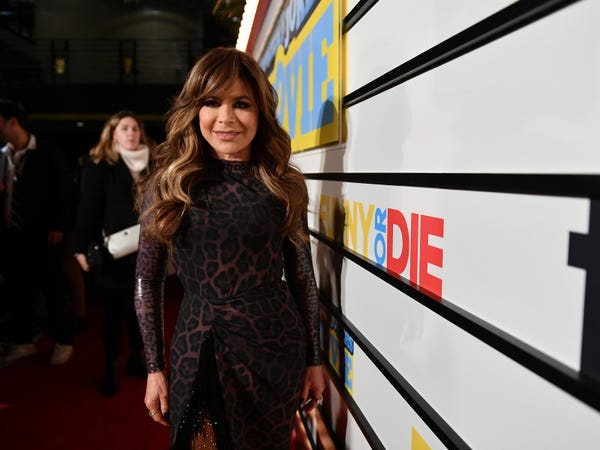 Born to a father of Syrian-Jewish descent and a Canadian-Jewish mother, Paula Abdul grew up in a practicing Jewish family, but perhaps due to her aspirations of professional dancing and singing — and her time as a Lakers Girl — she didn't have time to complete Hebrew school or have a bat mitzvah.

Despite this, Abdul is an observant Jew and dreamt for years of visiting Israel. In 2013, at 51 years old, she finally made a religious pilgrimage to Israel and even completed her bat mitzvah.

"Beyond being Jewish, I've always found myself to be very much in tune with spirituality," Abdul told The Associated Press. "I feel very grateful coming to Israel now, where as a woman I know who I am a lot more than even 10 years ago."

Abdul described the visit as "the most magnificent trip I've ever taken." 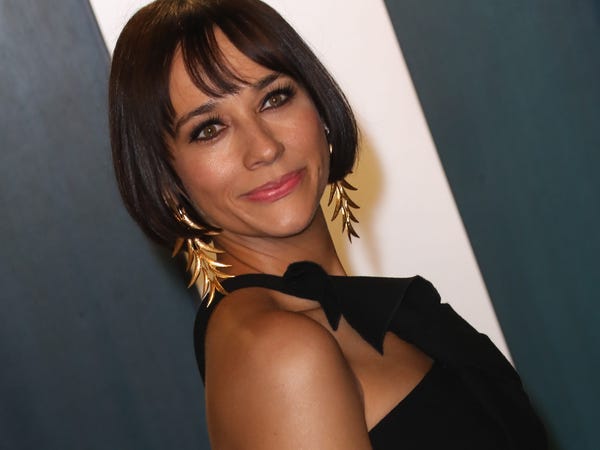 Jones explored her family tree in 2012 on the genealogy show "Who Do You Think You Are?" During the episode, she learned her maternal great, great grandfather's family were killed during the Holocaust in their home country of Latvia, according to Newshub.

Jones told Porter magazine in 2018 that she's proud of her heritage and grateful to even exist.

"I am a product of slaves. I am also a product of Jewish immigrants and Holocaust survivors," Jones said. "I have a responsibility to represent those things. The possibility of me being alive is so slim."

Gwyneth Paltrow's father is Jewish and she converted to Judaism in 2014. 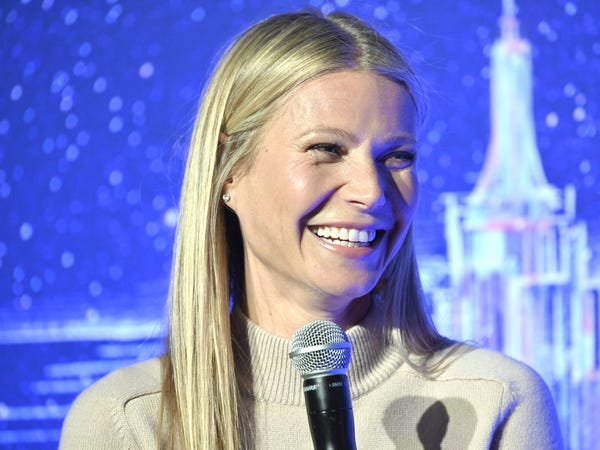 Paltrow was born to a Jewish father, Bruce Paltrow, and Catholic mother, actress Blythe Danner, and grew up observing both religions. She is reportedly a follower of the Kabbalah, a form of Jewish mysticism. In 2014, Paltrow announced she was converting to Judaism — which may have confused some fans who already thought she was Jewish — to properly claim the Jewish status, which is descended maternally.

In 2018, Paltrow married Brad Falchuk, director of "Glee" and executive producer of "American Horror Story," who is also Jewish.

Joaquin Phoenix's family roamed South America with a religious cult during his childhood, but he has said he's actually Jewish. 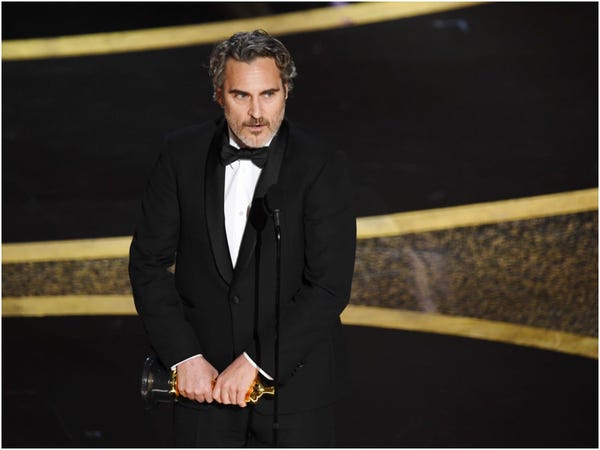 According to a 2011 article from The Guardian, Joaquin's maternal grandparents, who were Jewish, emigrated from Russia to the Bronx where his mother, Arlyn, was born.

Although the Phoenix family famously belonged to the religious cult "The Children of God" during Joaquin's childhood, he has said in recent years that he is a secular Jew.

He told Buzz in 2018, "My parents believed in God. I'm Jewish, my mom's Jewish, but she believes in Jesus, she felt a connection to that. But they were never religious. I don't remember going to church, maybe a couple of times."

Bob Saget was born to a Jewish family in Philadelphia, grew up attending Hebrew school, and had a bar mitzvah. 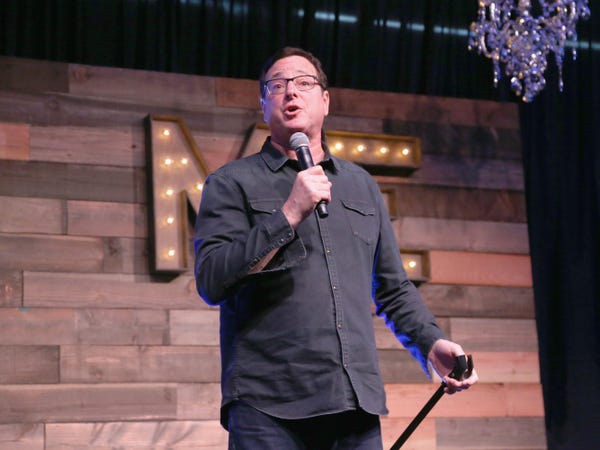 During a 2018 appearance on The Jewish Federation's "Jay's 4 Questions" podcast, Saget discussed his Jewish identity through the years.

"I'm not gonna lie, I've gone in and out of feeling closer and not closer to [my faith] and I think a lot of that has to do with difficulties and pain and a lot of losses the past couple years, I lost some serious friends," Saget told host Jay Sanderson. "It's complicated, it's a very complicated thing and yet … I'm very proud that I'm a Jewish person."

Saget added that his children recognize that they're Jewish and two have taken their Birthright trips.

Daniel Radcliffe is agnostic but extremely proud of his Jewish heritage. 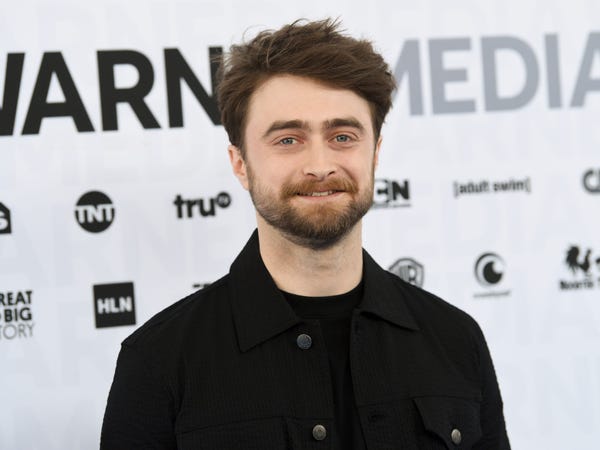 Radcliffe is Jewish thanks to his mom's lineage. In a 2009 interview with The Guardian, Radcliffe explained he's an atheist — in 2019 he updated his stance to agnostic — but proud nonetheless to be a Jew.

Jack Black is now an atheist but was born and raised Jewish. 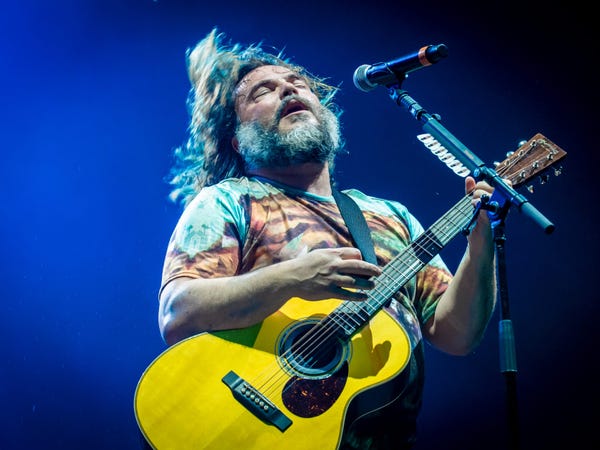 Jack Black's mother was Jewish and his father converted to Judaism while they were married (his parents later divorced and his father stopped practicing Judaism).

During an appearance on the H3 Podcast in 2018, Black said he was raised Jewish and had a bar mitzvah, but stopped practicing soon after. Black is now an atheist but said he is ensuring his kids are raised Jewish. During a 2012 interview with Conan O'Brien, he discussed his efforts to get his kids into a good Hebrew school.

Zoe Kravitz has Jewish relatives on both sides of her family. 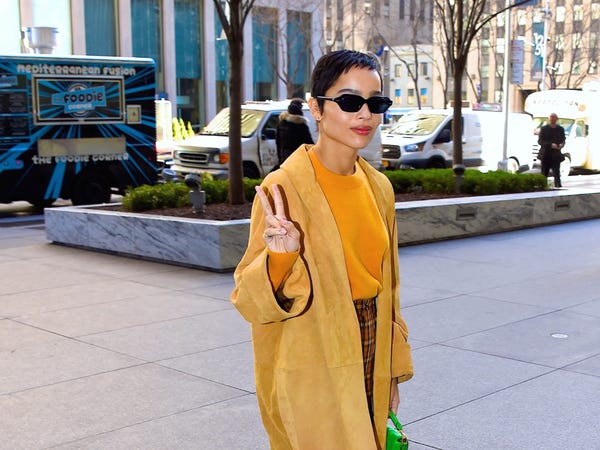 Speaking to Elle in 2018, Kravitz admitted she "felt like a freak" being a mixed-race teenager in her predominantly white private school. Kids would often ask to touch her hair and make her feel as if her white side didn't matter.

Kravitz told Elle she embraces her Black and Jewish heritages and looks to the past for motivation. "Jews and African-Americans have had so much pain, carried so much on their shoulders, and come so far," she said. 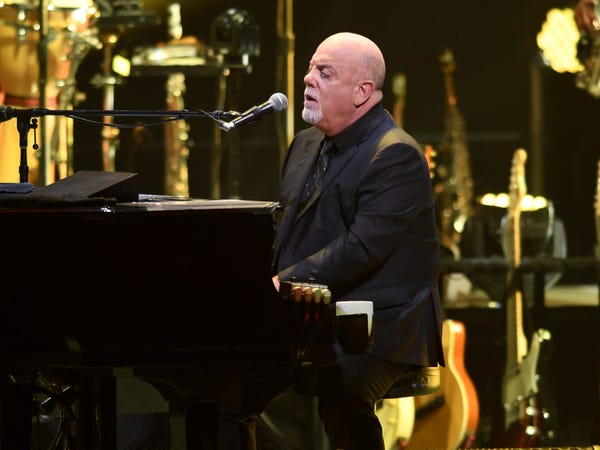 According to a 2014 New Yorker profile on the musician, Joel grew up in a predominately Catholic part of Hicksville, Long Island. He attended mass, tried confession, and was baptized at a local church. He is now an atheist.

Despite him trying to shake his Jewish identity as a kid, the article continues, other children teased him over his heritage, which led him to take up boxing to defend himself.

Ashley Tisdale's mother is Jewish, although the actress didn't grow up strongly observing the religion. 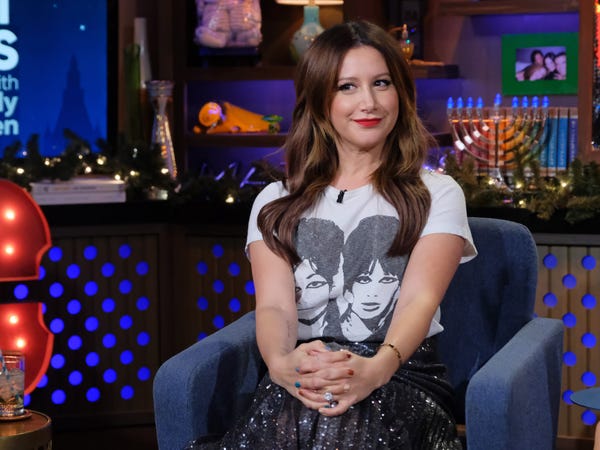 Tisdale was born to a Jewish mother and a Christian father and grew up exposed to both religions. Before she got her big break on "The Suite Life of Zack and Cody," the actress and singer was performing at the Monmouth County Jewish Community Center in New Jersey.

When asked by American Jewish Life Magazine in 2007 if Tisdale had a bat mitzvah, her mother, Lisa Morris Tisdale, responded, "No. She was busy working, unfortunately, on the road."

Barbra Streisand, known for playing Jewish characters on the silver screen, is Jewish in real life. 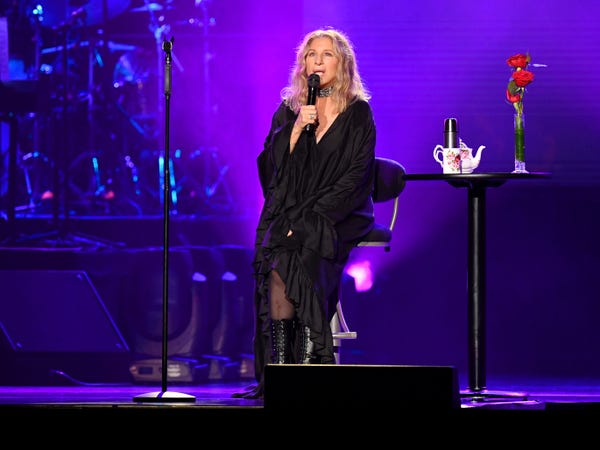 Barbra Streisand was born to Jewish parents and spent her first three years of school attending the ultra-Orthodox girls' Yeshiva of Brooklyn, according to the Jewish Women's Archive. Throughout her career, Streisand has played multiple Jewish characters on screen, including Fanny Brice in "Funny Girl" and "Funny Lady," Dolly Levi in "Hello Dolly!" and Yentl, the teenage Jewish girl disguised as a boy in the film of the same name.

Maya Rudolph has said that, growing up, she felt closer to her Jewish identity than her African-American identity because she was raised by her Jewish father. 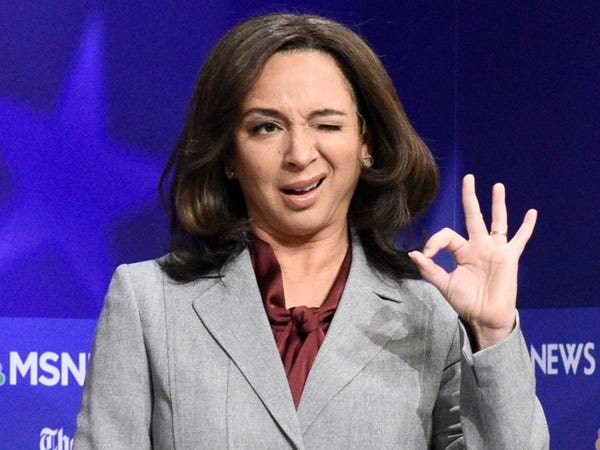 Maya Rudolph's father, the producer and songwriter Richard Rudolph, is an Ashkenazi Jew. Her mother, singer Minnie Riperton, who was African American, died in 1979 right before Rudolph's 7th birthday.

The actress told the Independent it meant she absorbed her dad's "genetic coding," including his humor and tendencies. Whereas, "because my mom died when I was so young, that identity was torn apart, in a way," she said.

Winona Ryder's Jewish lineage has a rich history. She recently opened up about experiencing anti-Semitism in Hollywood. 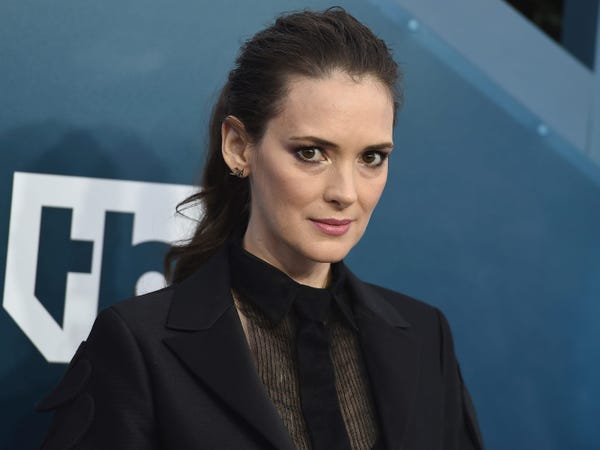 In June, Ryder told the Times of London she's "not religious, but I do identify" as Jewish.

Ryder's paternal family name was originally Tomchin but, like so many Jews who emigrated to the United States, it was changed after they left Russia. Ryder also said she had a cousin and other family members who died in concentration camps during the Holocaust.

In the interview, she also spoke about experiencing anti-Semitism in Hollywood.

"There are times when people have said: 'Wait, you're Jewish? But you're so pretty!'" Ryder told the Times.

Harrison Ford is Jewish via his mother's family. 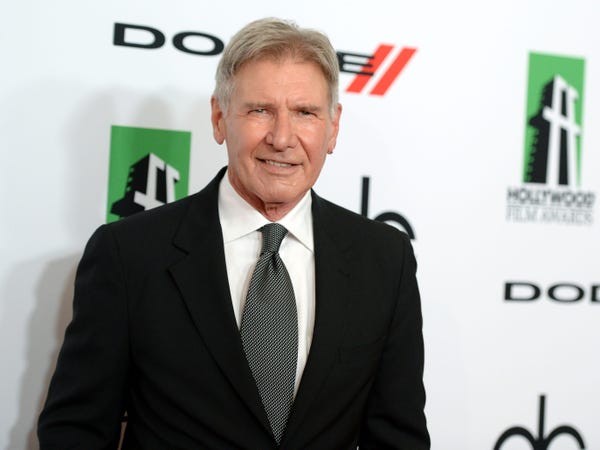 A 2008 Independent article quotes Ford saying, "I feel Jewish as an actor, but Irish as a person. That means that in work I can be very intense and concentrated, but in life I take things in my stride."

Zac Efron has said he's Jewish but also that he was raised agnostic. 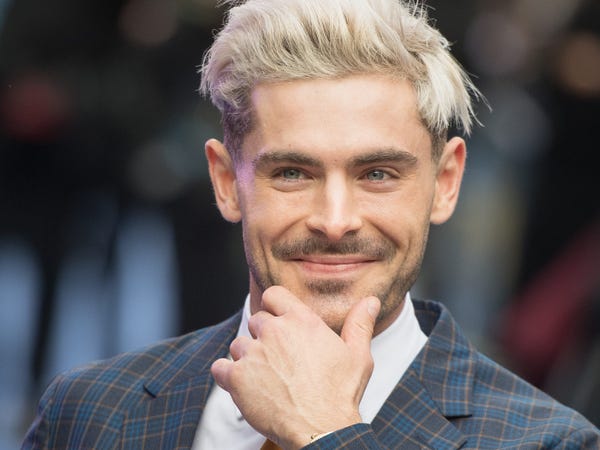 Somewhere in Zac Efron's family tree exists a Jewish lineage — his last name means "lark" in Hebrew — but he was raised in an agnostic household, according to the Evening Standard.

In 2014 while promoting the movie "Neighbors," Efron and co-star and fellow Jew Seth Rogen made a cameo on the Comedy Central series "Workaholics." In the clip, the two are being interviewed by Adam, Blake, and Anders to see who will be their next cubicle mate.

Rogen tries to get an advantage saying, "I think if you add a Jewish person, you'd probably be more edgy because you'd have a minority in your group," but Efron quickly points out that he's Jewish too.