Abby Johnson reflects on her speech to the GOP convention

“When they made that s— a law, I almost didn’t want to do the show,” Eilish reportedly said last weekend.

“Because I wanted to punish this f— place for allowing that to happen here. But then I remembered it’s you guys who are the f— victims and you guys deserve everything in the world. And we need to tell them to shut the f— up! My body, my f— choice!” 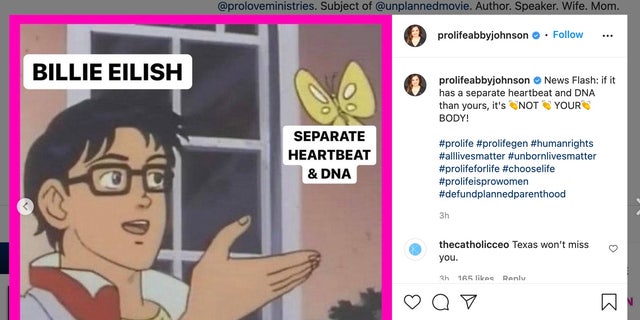 Her concert also featured the words, “Bans Off Our Bodies,” which flashed on the screen behind her.

Johnson, a Texan who leads the group “And Then There Were None,” responded on Friday: “News Flash: If it has a separate heartbeat and DNA than you, it’s NOT. YOUR. BODY!”

Johnson’s comments touched on a longstanding tension in the abortion debate that seemed to amplify with Texas’ focus on fetal heartbeats. The controversial law, which took effect last month, has prompted fierce backlash from celebrities and calls for boycotts.

The Supreme Court had rejected Planned Parenthood’s attempt to block the law, but earlier this week a federal court halted its enforcement.