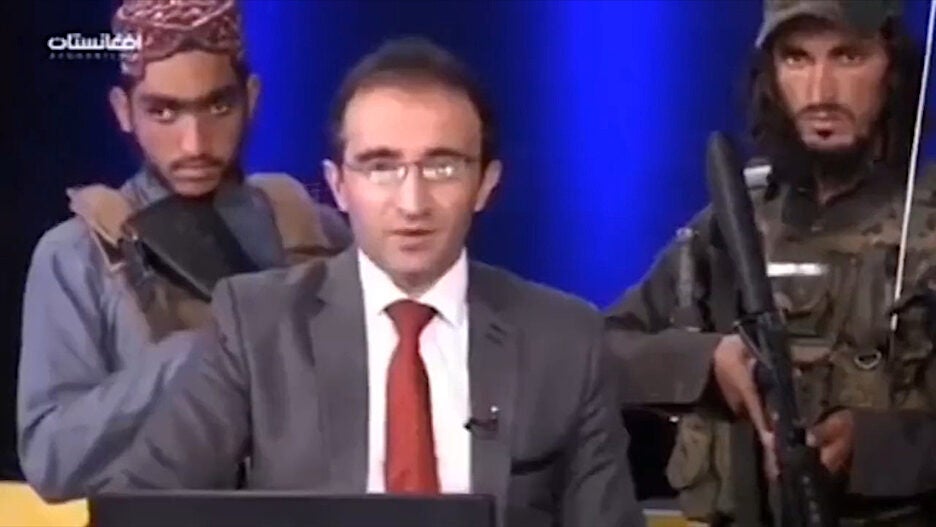 As the final hours tick away on the deadline for American evacuations from Afghanistan, a video from the Afghan TV network Peace Studio has gone viral, depicting the host of a debate program reading a statement from the Taliban while surrounded by armed fighters.

In the video, the host of “Pardaz” said that the Islamic Emirate — the name by which the Taliban refers to itself by — wants the public to “cooperate with it and should not be afraid.” BBC reporter Kian Sharifi says that the host then interviewed one of the Taliban fighters in the studio, though he was unable to translate the interview.

“Taliban itself is synonymous with fear in the minds of millions. This is just another proof,” tweeted Iranian journalist Masih Alinejad. “I call on President Biden to watch this and let us know if these militants posing behind this visibly petrified TV host are holding American weapons.”

While over 100,000 Americans and Afghan allies have been evacuated from Kabul, the Biden Administration has taken heat from media and politicians over his handling of troop withdrawals from Afghanistan, particularly following a terror attack this past week that killed 13 U.S. troops and dozens of Afghan refugees.

The U.S. faces a deadline to complete its withdrawal by August 31, a date that the Biden Administration was able to push back to from an original May 1 deadline agreed between the Taliban and the Trump Administration.