Alexis Ohanian is singing Serena Williams’ praises, once again. In an appearance on CBS This Morning, the entrepreneur spoke about his advocacy for paid family leave and applauded his wife’s ability to balance her demanding tennis schedule and life as a mom to their three-year-old daughter, Olympia, a skill he’s still learning to master.

“I had a kind of warped view of the path to excellence and the path to greatness being the direct result of just, pure work and that is obviously core to it, but one thing that I’m still working on is balancing that with time off, with time away, with time to reset and recharge,” Ohanian explained. “And something she [Williams] is really good at, is shutting it off and focusing on family time and personal time.”

Ohanian went on to say that he’s just a “smartphone away” from dipping back into work, but admitted that his wife keeps him in check.

The U.S. is one of the world's only developed countries that does not guarantee paid family leave. Nearly 1 in 4 mothers in America returns to work within 2 weeks of giving birth.@AlexisOhanian is a longtime advocate for paid family leave and joins us to discuss more. pic.twitter.com/qeTZs0OEmv

This is not the first time the Reddit co-founder has advocated for paternity leave. Back in 2019, Ohanian opened up in a new personal essay for NYT Parenting about his decision to take his 16 weeks of leave when he and Williams welcomed Olympia in Sept. 2017.

“Nothing could have dragged me away from my wife and daughter in those hours, days and weeks — and I’m grateful that I was never forced to choose between my family and my job,” he wrote.

Noting that Williams faced “near-fatal complications” during Olympia’s birth, Ohanian expressed how important his time off was to their family.

“Serena spent days in recovery fighting for her life against pulmonary embolisms. When we came home with our baby girl, Serena had a hole in her abdomen that needed bandage changes daily,” he recalled of the tennis pro who had an emergency C-section. “She was on medication. She couldn’t walk.”

Ohanian noted that his time with Olympia early on made him more sure of himself as a parent.

“Spending a big chunk of time with Olympia when she was a newborn gave me confidence that I could figure this whole parenting thing out,” he wrote. “As an only child with no cousins, I didn’t grow up around babies; in fact, I had never held one until my daughter was born. At first, holding her terrified me. I am a giant and she’s so tiny… What if I break her? I didn’t  — which was encouraging — and then I learned how to calm her crying, rock her to sleep and handle her toddler years with grace.”

Alexis Ohanian Is 'Fine' Being Referred to as Serena Williams' Husband 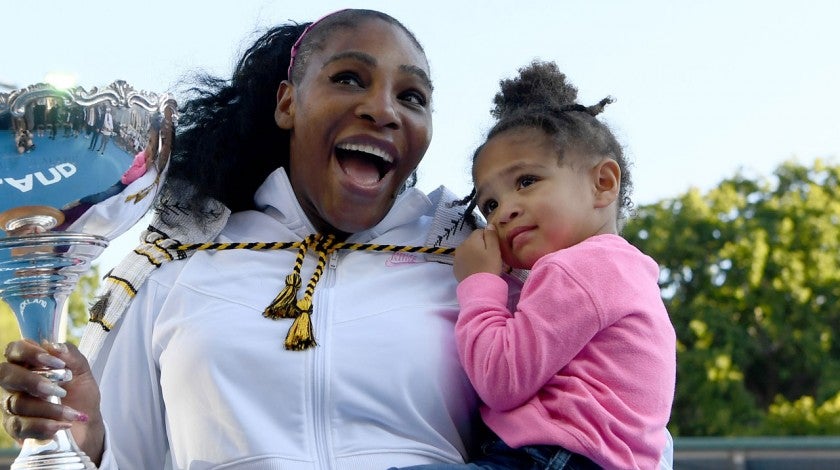