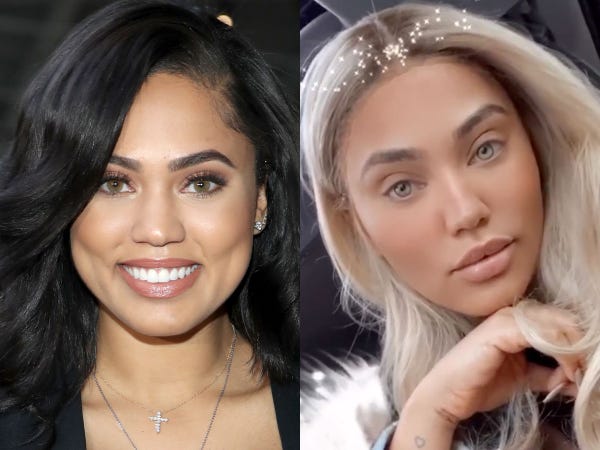 On Sunday, the 31-year-old cookbook author debuted the lighter locks in a series of Instagram selfies, one on her Story and one on her page.

"Mom goes blonde (temporarily)," she captioned her post, which was a boomerang of her and her husband, NBA star Stephen Curry, sitting in a car.

Ayesha, who's naturally a brunette, received mixed reactions to the selfie. Because while she's highlighted her hair in the past, she's never gone fully blonde before.

Some of her fans didn't approve of the new color, claiming that they didn't recognize her and accusing her of trying to look like a white woman. (It's important to note, however, Ayesha is mixed race since her father is of African-American and Polish descent.)

Despite some people's issues with Ayesha's hairstyle, many fans stood up for her.

They noted that it's very common for women to try out different wigs and use filters on Instagram, arguing that people on Twitter would likely criticize the Food Network host regardless of her actions.

Stephen, who's been married to Ayesha since 2011, defended his wife in the comments section of her Instagram post.

"You beautiful baby. And don't you let anybody tell you differently ok? I mean it. There's just a bunch of meanies out there and I don't like it. I don't like it one bit. Do you boo boo," the Golden State Warriors player wrote.

Stephen added, "P.S. If the wig falls off I won't tell anybody, I promise. Pinky promise. It be hilarious though, but won't anybody know. Wait- that's been you in this bed the whole time??? I ain't even know. Now I'm tripping."

Ayesha, who shares three children with the athlete, responded, "whyyyyyy are you like this?!!!!" with crying laughing emojis.

Ayesha responded to the criticism in a tweet Monday.

"It's the fun wig for a switch up and extremely common IG filter we all use from time to time for me… I just…," she wrote, adding two laughing emojis.

Ayesha continued, "Y'all be taking this stuff wayyy to serious."