Brad Pitt may be nearing his 60s, but the famous actor has never looked more handsome.

Hot in Hollywood! Brad Pitt, 57, looked sexier than ever on the set of his new film, Babylon, as he was seen wearing a dapper, heather grey blazer over a crisp, white button down shirt. The actor also sported a pair of sharp sunglasses and dark trousers, looking Hollywood cool with his hair slicked back. The on-set shot marks another time fans have gotten a glimpse of one of tinsel town’s hottest stars, as he was seen in August wearing an unbuttoned shirt and suspenders and in September wearing a white tuxedo.

Babylon, which has been described as “The Great Gatsby on steroids,” is a period piece that takes place in the golden age of Hollywood. The film, directed by La La Land‘s Damien Chazelle, explores the rise and fall of numerous characters, with Brad playing actor and director, John Gilbert, and Margot Robbie playing Clara Bow — both who were at the height of their powers during the silent film era. Li Jun Li is also on the roster to play another giant of the era, Anna May Wong, who was considered to be the first Chinese-American movie star. 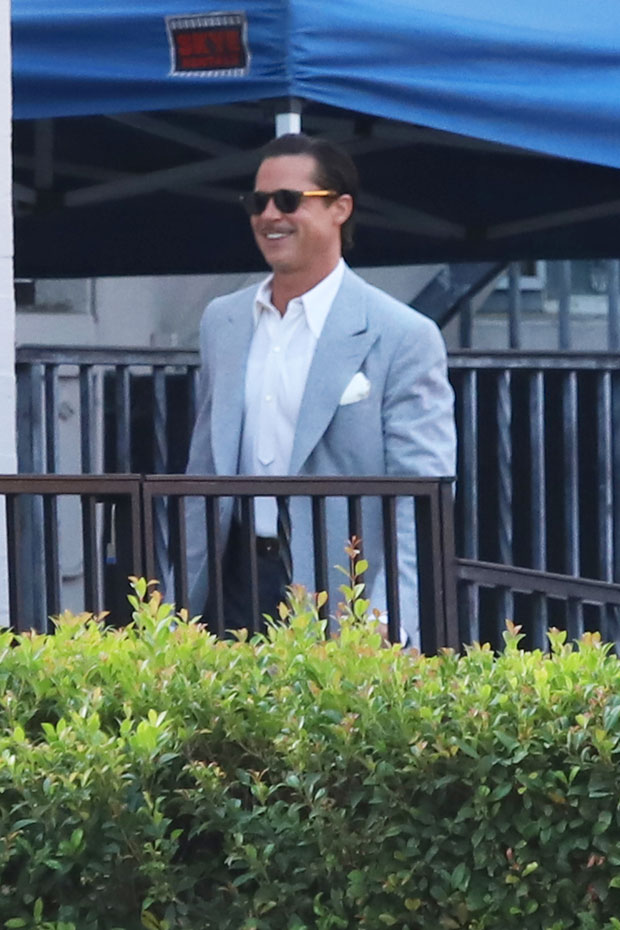 Along with Babylon, Brad has two other movies arriving in 2022 — The Lost City Of D with Sandra Bullock and Channing Tatum, and Bullet Train with Joey King and Michael Shannon. It looks like it’s going to be a busy year for the movie star, who’s still embroiled in a lengthy child custody battle with his ex, Angelina Jolie. Considering her possible fling with R&B star The Weeknd, more sexier-than-ever photos can definitely do some good for Brad!