Chadwick Boseman made SAG Awards history this year — becoming the first actor to earn four nominations in a single year — and during Sunday’s 27th Screen Actors Guild Awards, he earned another win for Outstanding Male Actor in a Leading Role for his performance in Ma Rainey’s Black Bottom.

As with Boseman’s other posthumous awards this year, his wife, Simone Ledward Boseman, accepted the honor on his behalf.

“Thank you, God. Thank you Leroy and Carolyn Boseman,” she said before thanking his co-stars and Ma Rainey‘s filmmakers. “If you see the world unbalanced, be a crusader that pushes heavily on the seesaw of the mind. That’s a quote by Chadwick Boseman. Thank you Screen Actors. Thank you, Chad.”

A legacy that continues to live on in our hearts and on our screens. Thank you, @chadwickboseman, for your lasting gift. #sagawards@MaRaineyFilmpic.twitter.com/7bZZKzLYA2

Boseman was also nominated for Outstanding Male Actor in a Supporting Role for Da 5 Bloods. The award went to Judas and the Black Messiah‘s Daniel Kaluuya, who decided the win to his fellow nominee, saying, “This one’s for Chadwick Boseman.”

The win comes after Boseman’s death in August 2020. He was 43. This awards season has thus far seen him win a Critics Choice Award, Golden Globe, Gotham Award and NAACP Image Award, with Ledward paying tribute to her late husband with each acceptance speech. 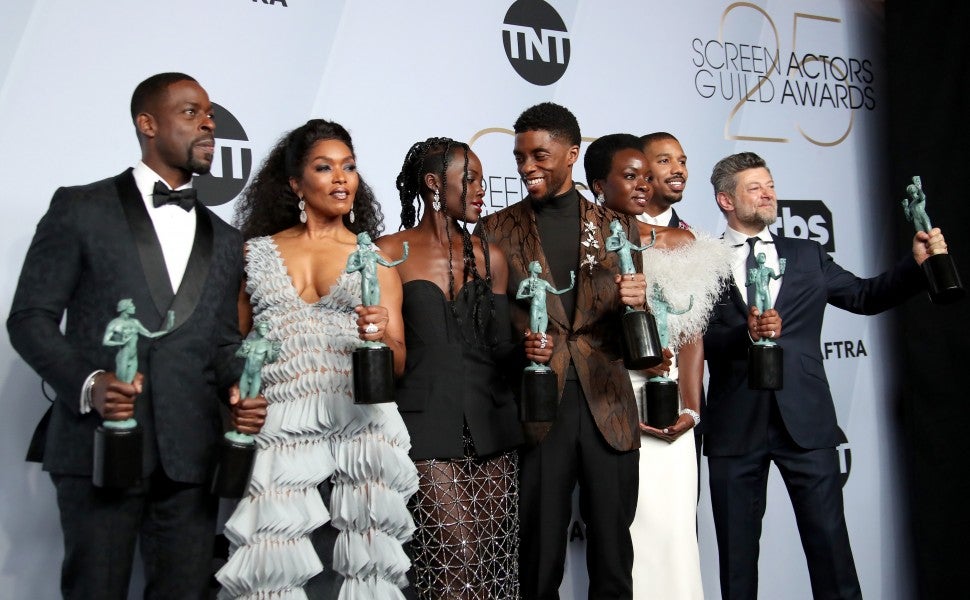 Boseman himself spoke at the SAG Awards in 2019, when Black Panther‘s ensemble won Outstanding Cast in a Motion Picture. Standing onstage alongside his co-stars, Michael B. Jordan, Angela Bassett, Lupita Nyong’o and Danai Gurira, Boseman spoke about what it means to be “young, gifted and Black.”

“That we could be full human beings in the roles that we were playing, that we could create a world that exemplified a world that we wanted to see. And to come to work every day and to solve problems with this group of people, this director, that is something that I wish all actors would get the opportunity to experience,” Boseman concluded. “If you get to experience that, you will be a fulfilled artist.”

Be sure to check out the complete SAG Awards winners list.