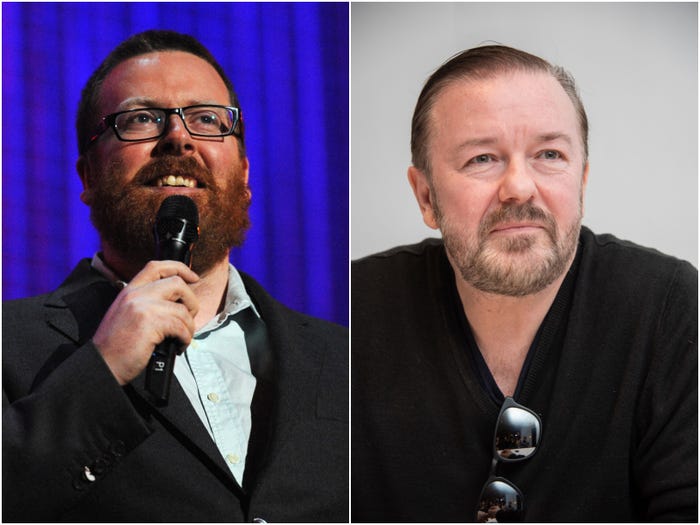 Scottish comedian Frankie Boyle has called out Ricky Gervais for his "lazy" jokes about trans people.

Boyle, who himself is known for his offensive brand of shock humor, called out Gervais during his recent TV special "Excited for You to See and Hate This."

As per Pink News, Boyle said: "My genuine reaction was, it's not that much weirder than Ricky Gervais saying that he's a stand-up comedian."

Boyle expanded on these comments during a podcast interview with Louis Theroux, saying that Gervais "sort of" went into stand-up after "The Office." Boyle and Theroux discussed Gervais' 2018 Netflix stand-up comedy special "Humanity," during which Gervais spent a segment making jokes about Caitlyn Jenner, including a joke in which Gervais said a trans person is like him "self-identifying as a chimpanzee."

Of the special, Boyle told Theroux: "If you're a stand-up watching him, you feel like, oh, this is someone doing a version of this thing we do. Really, it's more that I saw his routine about trans people, and I thought it was very lazy."

Boyle added: "I would like him to have the same respect for trans people that he seems to have for animals. I think that's not a lot to ask."

Gervais appeared to address Boyle's comments on Monday, tweeting: "I look down on everyone equally."

Insider has reached out to representatives for Gervais for comment.

Gervais is a vocal supporter of animal rights, but his jokes toward the LGBTQ community have been questioned several times.

Libby Hill wrote for IndieWire in 2018 that she thought Gervais thinks "trans people are less valid than everyone else" after Gervais tweeted several jokes that were deemed transphobic.

Gervais later said he was simply "taking the piss."

However, some have seen Boyle's comments about Gervais' jokes as hypocritical, given the controversial nature of many of Boyle's own jokes.

One user wrote: "Frankie Boyle has been making sexist, racist and homophobic jokes for years but transphobia is where he draws the line??"

Meanwhile, Boyle was also called a hypocritic for taking the moral high ground against Gervais when he has made many jokes about the disabled son of British TV personality, Katie Price. One Twitter user wrote: "I mean I agree but… Frankie Boyle aka the one who famously took the piss out of Katie Price's disabled child?"

However, others have defended Boyle, with one user writing: "Lot of people bringing up Frankie Boyle's previous 'jokes' so I just wanna say people are allowed to learn with time and realise that something is problematic. Changing your views isn't hypocrisy, it's growth."

Meanwhile, a trans writer praised Boyle for "putting his money where his mouth is." @BeffernieBlack wrote: "as a trans comedian with 19 years experience he's employed me as a writer where many others haven't and wouldn't. He's someone who's grown as a person and been accountable for what he's said and done even when his fanbase hated it."