Celebrities Dave Bautista and Alyssa Milano shared an online petition calling for Sen. Ted Cruz to be expelled from the Senate.

Cruz has faced criticism in recent weeks for perpetuating the notion that Joe Biden won the presidential election through organized, wide-scale voter fraud. He has also been rebuked by people on the left for voting against certifying the electoral college votes on Jan. 6 after rioters breached the security of the U.S. Capitol.

Milano also shared the MoveOn.org petition later in the day with a gif that reads: “The path to unity flows through accountability. The path to healing begins with justice.”

The link then takes users to a page calling on Cruz to be expelled for treason as well as conspiracy to incite armed insurrection in Washington, undermining the rule of law, a coup attempt and sedition.

The petition, which as of this writing has been signed by more than 74,000 people, further blames Cruz for enabling the events that took place at the U.S. Capitol on Jan. 6, laying blame for the disruption to the Senate’s business, the potential risk to Congress’ safety and the evacuation of the chambers at the Capitol building on him. 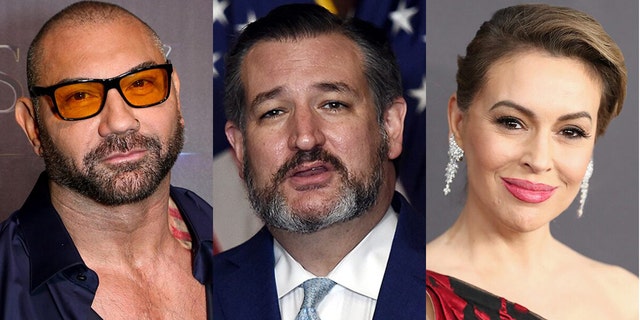 Dave Bautista and Alyssa Milano urged fans to sign a petition calling for Ted Cruz to be expelled from the Senate.
(Getty Images)

Cruz has since defended his position on voting against the vote certification, noting that the riots that took place at the Capitol have nothing to do with his decision on the matter.

“What I was doing is debating on the floor of the Senate election integrity,” Cruz said during an interview with KXAS-TV, an NBC affiliate in Fort Worth, Texas. “That has nothing to do with this criminal terrorist assault, which was wrong and needs to be prosecuted. It’s exactly the opposite. What I was doing is how you’re supposed to resolve issues in this country.”