Donald Trump is reportedly asking for a little help from visitors at his Mar-a-Lago resort. The Palm Beach, Florida, location is where Trump is reported to have headed after he left the White House in January to make way for President Joe Biden.

Trump is known to be a big fan of the sprawling property, which he purchased in 1985, and even escaped being banned from the resort in February after he moved back to Florida from Washington, D.C. Per The Guardian, there was actually a request from neighbours to ensure Trump was not allowed back to the area, though Palm Beach Town Council ruled to allow him to continue living there. “The five-member council took no action on the question, which was placed on the agenda because of neighbors’ complaints that Trump’s presence would hurt property values,” the site claimed.

Trump has spent a lot of time at Mar-a-Lago while laying somewhat low since Biden’s inauguration. Author Michael Wolff claimed in the book “Landslide: The Final Days of the Trump Presidency” (via The Times) that the former president has been spotted dining there at a “roped off table” and is supposedly “motivated by revenge” when it comes to those who didn’t support his disproven claims of voter fraud in the 2020 election.

But he’s also apparently turning to his Mar-a-Lago visitors for a little help with something pretty major. Read on to find out what Trump has supposedly been asking about. 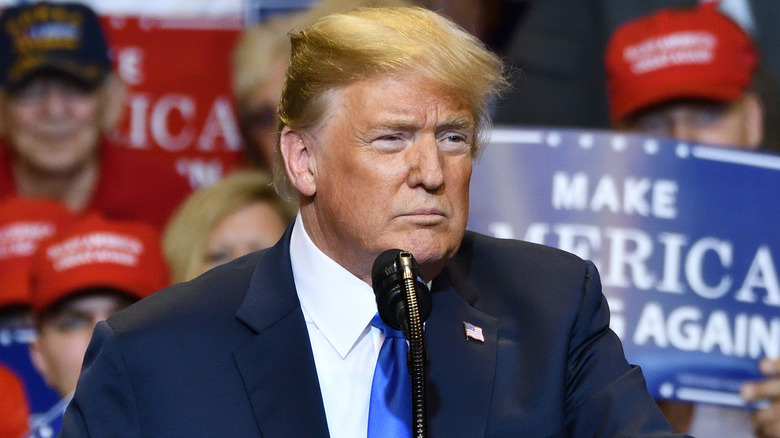 Michael Wolff claimed in “Landslide: The Final Days of the Trump Presidency” (via The Times) that former President Donald Trump is well aware of the legal issues he’s currently facing — and those around him know it too. Though the businessman has put up a brave front in public, Wolff claimed that Trump’s circle think he will face indictment charged in regards to the case surrounding the Trump Organization and its CFO, Allen Weisselberg. The company pleaded not guilty to tax fraud charges on July 1 (per NBC News).

The book claims Trump allegedly knows “he faces his legal challenges without any real lawyers in place” and has apparently been “going so far as to ask random visitors [to Mar-a-Lago] if they know any good ones.”

Notably, Trump’s former lawyer, Rudy Giuliani, was suspended from practising in New York in June after The New York Supreme Court found he had spread “demonstrably false and misleading statements to courts, lawmakers and the public at large” about what he, Trump, and his supporters claimed was fraud in the 2020 election (via The Guardian).

The latest revelation about the former president came after Trump revealed he’d made a decision about running again in the 2024 election while speaking to Fox News’ Sean Hannity in June.