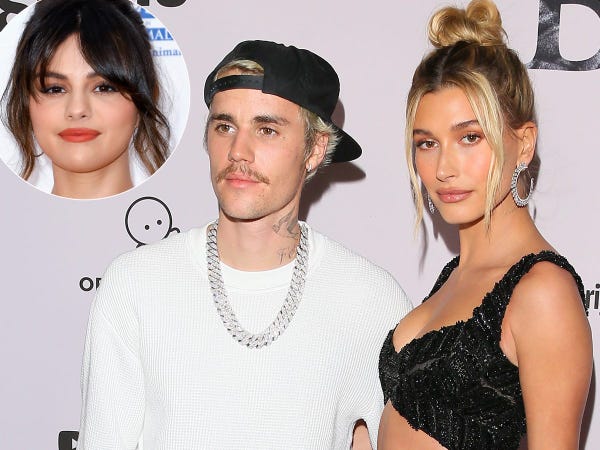 Hailey Bieber (née Baldwin) got a new tattoo in honor of her husband Justin Bieber, but fans can't stop comparing the model's ink to a ring Justin gave to his ex, Selena Gomez.

NYC tattoo artist Mr. K posted a picture of Hailey's "J" tattoo on his Instagram Sunday, along with the caption "J is for @justinbieber."

Fans on social media, however, were quick to point out the similarities between the new "J" on Hailey's ring finger, and the "J" on the promise ring Justin gifted Gomez in 2012 that led to speculation over whether the couple was engaged.

Justin and Gomez began dating in 2010, and kept up an on-again, off-again relationship until 2018. Justin and Hailey reunited shortly after, and got married later that year.

Gomez has since spoken out about her relationship with Bieber in her music and interviews. Her 2019 song "Look at Her Now" was largely believed to be about Bieber, and included lyrics saying that she "dodged a bullet."

The "Rare" singer also told KISS FM UK that the relationship was filled with "emotional chaos."