While addressing the allegation that she lost ‘everything’ over her husband David Eason following dog shooting, the former star of ‘Teen Mom 2’ insists that she ‘found peace.’

AceShowbiz –Jenelle Evans has spoken out about the allegation surrounding her husband David Eason. The former “Teen Mom 2” star set the record straight during a Q&A session on her social media platform.

On Tuesday, September 21, the 29-year-old star had a Q&A session with fans on her Instagram Story. The TV personality, who was fired from the MTV show in April 2019 after her husband reportedly shot and killed their French bulldog, received a question from her follower that read, “After losing everything because of your psycho hubby, was it worth it?”

Putting the rumors to rest, Jenelle insisted that she “didn’t lose anything.” The former reality star wrote, “I didn’t lose anything, my family has found peace.” Defending her husband, she also added, “If you knew him, you’d probably like him too.” 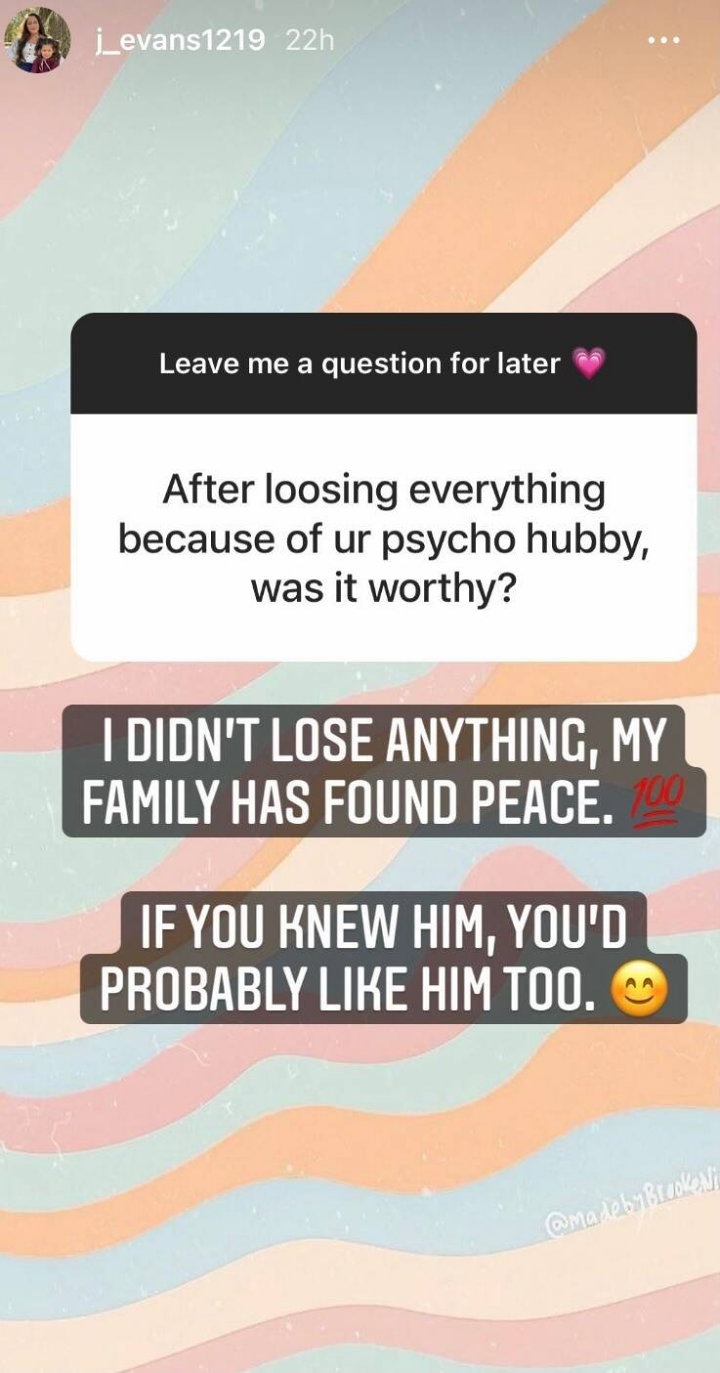 Jenelle Evans insistd that she found ‘peace’ after being fired from ‘Teen Mom’ following her husband’s dog shooting.

In April 2019, Jenelle’s husband David reportedly killed their French bulldog Nugget. A month later, MTV confirmed in a statement that the network had parted ways with the couple following the news.

“MTV ended its relationship with David Eason over a year ago in February 2018 and has not filmed any new episodes of ‘Teen Mom 2’ with him since,” so read the statement. “Additionally, we have stopped filming with Jenelle Eason as of April 6, 2019, and have no plans to cover her story in the upcoming season.”

In September the same year, David insisted that he’d taken the drastic action against the family pet to protect their daughter, Ensley, who is now 4 years old. “It was a situation where my daughter, her health, her safety was in danger,” he told PEOPLE at the time. “It upsets me just as much as anybody who doesn’t even know Nugget may think they’re upset.”

“This was something that nobody wants to ever have to do,” David continued. “The dog was aggressive. Yes, she might not be huge or whatever, but you know when a dog bites a child on the face more than one time, then it should never be around the child again.”

As for Janelle, she blamed the backlash she and David received on a cultural chasm between her husband’s upbringing and viewers’ perspective. “David has grown up in the country lifestyle. He hunts, he fishes,” she explained. “The way he was raised is really different than a lot of other places. We understand that people are scared of the whole gun thing, [but] they just don’t understand it from David’s perspective.”