JoJo Siwa said that she was resisting coming out as a member of the LGBTQ+ community until she met her special someone. And that finally happened when she fell for girlfriend Kylie Prew.

JoJo Siwa, 17, waited until the time was was right to officially come out. The YouTube star revealed in a new interview with Demi Lovato, 28, that her decision to come out as a member as the LGBTQ+ community in January 2021 was easy once she fell in love with her current girlfriend, Kylie Prew. “I always knew with me, but I always said I’m not going to do anything with it or be like, ‘Hey, by the way, I’m gay, but I’m not in love with a girl yet,’ ” she said on the July 14 episode of 4D With Demi Lovato. “I was like, ‘I’ll wait until I actually have a girlfriend or I have a girl that I’m in love with and I’ll do something with it.’ And that happened,” JoJo added.

JoJo went public with her relationship with Kylie at the beginning of the year, just weeks after she came out. The two were “best friends” at first, JoJo previously revealed, but their friendship eventually turned romantic. In the interview, JoJo told Demi that she kept the romance quiet from the public at first out of respect for Kylie and her family. “The only thing that held me back from telling the world right away was my girlfriend’s family and my girlfriend because I wanted to make sure she was ready,” she said. 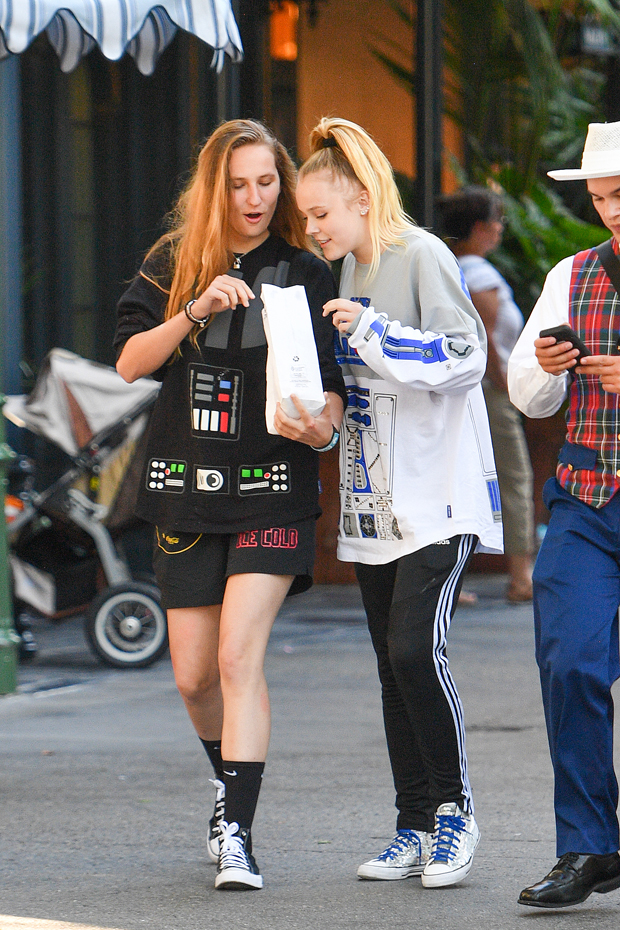 The former Dance Moms star also revealed to Demi, who herself is a member of the LGBTQ+ community, that her “gay awakening” involved one of the pop star’s hit songs. “Do you remember your dancer, her name is JoJo Gomez, and you did ‘Cool for the Summer’ together?” JoJo said to Demi. “I remember seeing that and just being a little too interested,” the teenage superstar added with a laugh. Demi said that the hit 2015 summer single was also her way of revealing her truth. “I didn’t come out until 2017. But ‘Cool for the Summer’ was like 2014, 2015, and that to me, it was my way of saying, ‘I’m not ready to come out but…’” Demi said, before JoJo interjected, “I want to share this, but I don’t know how yet.”

Since coming out, JoJo has seemed happier than ever while documenting her relationship with Kylie on social media. In February, JoJo gushed over her girlfriend as the couple celebrated their first Valentine’s Day together. “No one in the world makes me as happy as this girl does,” JoJo wrote in a sweet tribute. “I’m so thankful to have fallen in love with the most perfect person ever who makes me smile 24/7. I love you more than you’ll ever know!”

The teenager superstar initially came out in a TikTok video set to Lady Gaga‘s tune “Born This Way,” then followed it up with a picture of herself in a t-shirt that read “Best. Gay. Cousin. Ever.” on Jan. 22. And as JoJo later revealed, Kylie was a big influence for JoJo to share her truth. “One day I was on FaceTime with my girlfriend, and we were just talking about it, and talking about all the love that came in and we were both like, ‘Technically, I still haven’t confirmed it’,” Jojo revealed in an interview with Jimmy Fallon. “So I was like, ‘I kinda just want to post this picture on my real Story,’ and she was super encouraging. She was like, ‘Do it!’ And I was like, ‘All right,’ and I did it,” she also said.