Joe Biden, 78, shared a picture of himself and Kamala Harris, 56, sitting next to each other while wearing masks on his Twitter page yesterday. He captioned the post: “Mask up, America.” The President was seen wearing a reusable mask, while his colleague sported a disposable one.

Kirstie Allsopp, 49, shared the picture in view of her 424,000 Twitter followers today, writing: “Devastated to see @KamalaHarris in a disposable mask.

“World leaders need to understand the impact on our oceans of disposable masks and lead by example.”

Many of Kirstie’s followers reacted to her opinion, with one claiming her comment was “over the top”.

But defending her view, she replied: “When our oceans are killed by what we are polluting them with, our planet will die, devastated won’t come.” 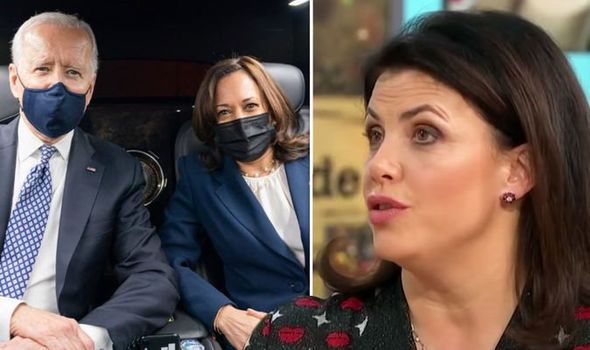 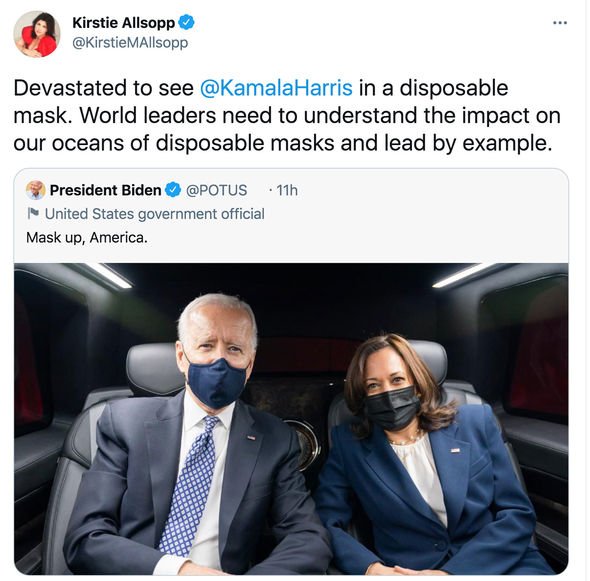 In a further tweet, Kirstie went on to say there had been 53 million masks which have ended up in landfill in the UK each day.

“The scariest part is all the others that don’t make it into the bin,” she added.

“Masks are being found in streams, rivers and oceans. Imagine what is happening in countries with bigger populations?”

Another urged Kirstie not to judge as they pointed out they had no choice but to wear a disposable mask. 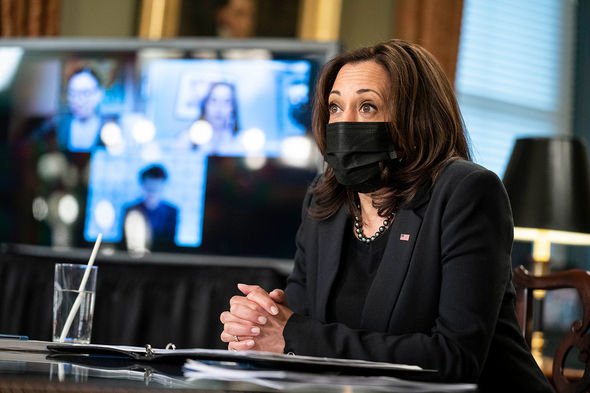 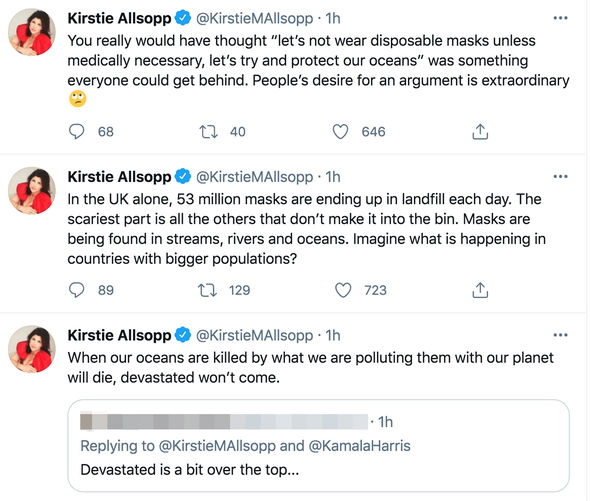 A third added: “Better than no mask at all, pet but yes I see your point.”

Querying some people’s responses, she added: “You really would have thought ‘let’s not wear disposable masks unless medically necessary, let’s try and protect our oceans’ was something everyone could get behind.

“People’s desire for an argument is extraordinary,” she added alongside a rolling eyes emoji.

The World Health Organisation (WHO) and scientists say face coverings are an effective method of minimising the spread of the coronavirus.

At present, citizens in England are required to wear a mask over their nose and mouth on public transport and in indoor public settings.

The official Government website states that cloth and disposable face coverings work best if they are made with multiple layers (at least 2) and form a good fit around the face.

Concerns have been raised about personal protective equipment and masks damaging the ocean and marine life by charities.

Jack Middleton from Cornwall-based Surfers Against Sewage told the Independent: “Since lockdown has started to be lifted we’ve witnessed a new wave of plastic pollution littering our beaches in the form of disposable masks and gloves.

“While the PPE has helped to save lives over the past few months, we now need to consider how we dispose of it properly to prevent it from flowing into our rivers and oceans and destroying our beaches.”

The RSPCA have also called for people to snip the straps off their masks in half when thrown away amid increasing reports of animals being tangled in them.

Chief Executive Chris Sherwood said: “Our RSPCA officers have had to rescue animals from getting tangled in face masks and we expect that this may go up as time goes on, so the best thing to do is to simply cut the elastic ear straps in half before throwing it away.”