Machine Gun Kelly got very handsy with Megan Fox backstage at the iHeartRadio Music Awards on May 27, and it was all caught on video!

Machine Gun Kelly, 31, and girlfriend Megan Fox, 35, don’t seem to care who’s watching when they’re engaging in some hot PDA. They made that very clear while backstage at the 2021 iHeartRadio Music Awards on May 27.

As you can see in the clip below, Machine Gun Kelly copped a feel of his girlfriend while filming a selfie video with her backstage during the show. Obviously, he had to be very careful since he was also rocking razor-sharp nails. We can only imagine they’d poke an eye out if he wasn’t careful.

Anyway, Machine Gun Kelly, whose real name is Colson Baker, definitely had fun with Megan during the show. He even took home the award for Alternative Rock Album of the Year for Tickets to My Downfall and celebrated by flying home in a private jet with custom pink lighting.

“Whoa god d**n my love. You look so good,” Machine Gun Kelly said while filming the quick video with Megan, which you can see above. 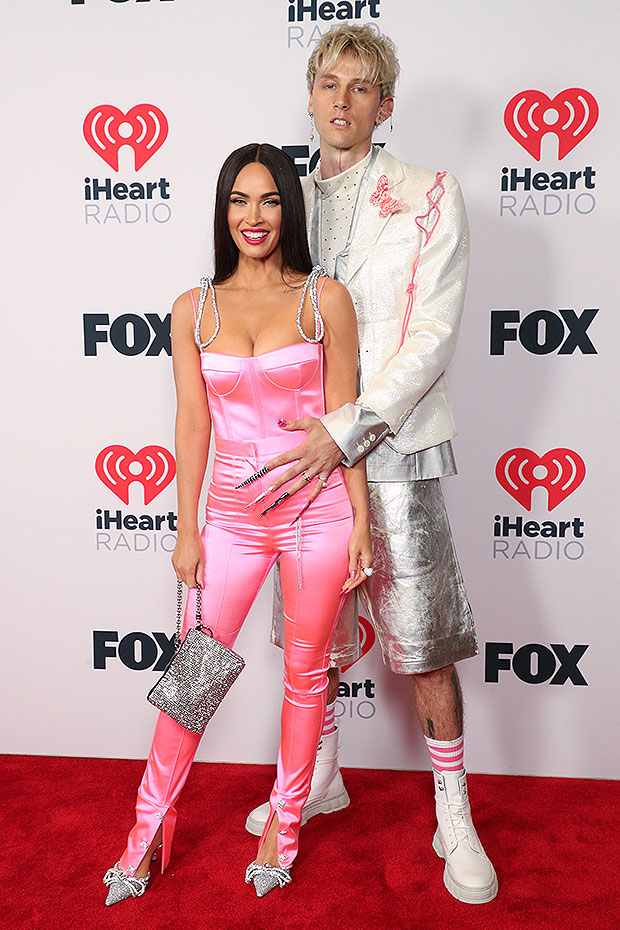 Megan just giggled as Machine Gun Kelly tried grabbing her chest. She then tried showing him how to do it properly since he couldn’t get a good grip, and then he finally exclaimed, “Got it! got it!”

As you can see, Megan looked fantastic in a bright pink jumpsuit, and it showed off her amazing figure. Meanwhile, the rapper wore a bright white jacket with pink string and a matching butterfly clip placed on his upper collar. They looked pretty fantastic together.

Megan filed for divorce from Brian Austin Green in November 2020, and they share three children together. She and Machine Gun Kelly started dating in the spring of 2020 after they met on the set of Midnight in the Switchgrass.