Meghan King Edmonds’ husband, Jim Edmonds, is fighting back against allegations that he cheated on the former Real Housewives of Orange County star.

“Regrettably, I had a lapse in judgment. I engaged in an inappropriate conversation with this person,” Jim, 48, told Us Weekly exclusively in a statement on Thursday, June 13. “At no time was there any type of relationship or physical contact. Absolutely none. This is someone trying to profit from my name. I am aware she has done this to others in the past.”

The retired baseball player went on to apologize. “Clearly, I made a very poor decision to expose myself and my family to this type of person. For this, I am truly sorry and sought forgiveness from my wife,” the statement continued. “I’m outraged over the intent to ruin my family and intend to take legal action. We were never having any problems in our marriage. My attorney is in possession of documents wherein this person has admitted fabricating large portions of her ‘story.’”

Jim reiterated that he “never had any sort of a physical relationship outside of my marriage with her or anyone else.” 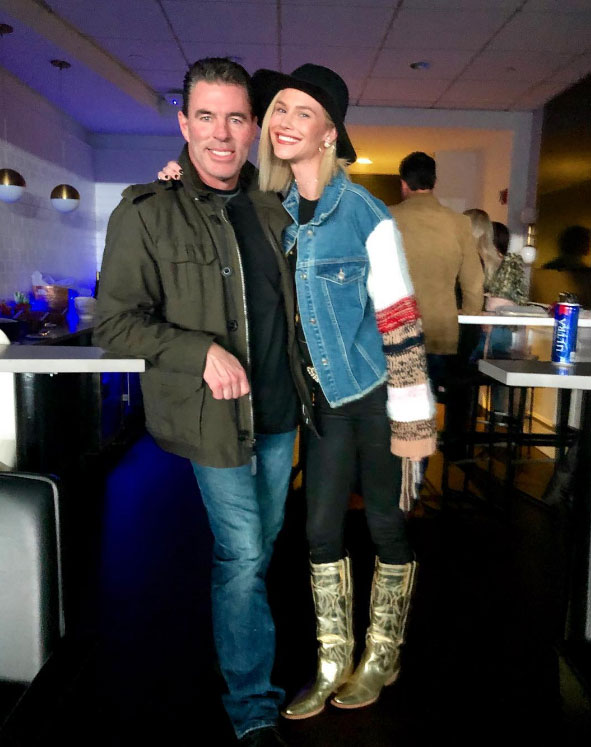 Earlier on Thursday, AllAboutTheTEA.com published allegations of infidelity on the former Cincinnati Reds player’s part. The website claimed that Jim cheated on his second wife, Allison Jayne Raski, with a woman who is allegedly referred to as the “baseball madame.” (The exes, who split in 2014, share two children.)

A source alleged that the two reconnected in March 2018 when Meghan, 34, was pregnant with the couple’s now 12-month-old twin sons, Hart and Hayes. The duo are also parents of daughter Aspen, 2.

The blogger allegedly confronted the woman after finding out about her exchanges with Jim. The sports broadcaster procured a non-disclosure agreement with her, according to the website.

Meghan and Jim tied the knot in October 2014. He is also the father of two daughters with his first wife, Lee Ann Horton, who died in 2015 following a battle with cancer.

The Bravo personalities joined The Real Housewives of Orange County in season 10, which aired in 2015. They departed the series after season 12 in 2017.

Meghan hinted at trouble in October 2018. She explained in a blog post at the time that she and Jim were on vacation because “our marriage needs it.” She added that they had “become complacent in our lives and have taken each other for granted. … We need shining and buffing. We need US back … and the sad part is that we never even realized ‘we’ were missing.”

With reporting by Brody Brown