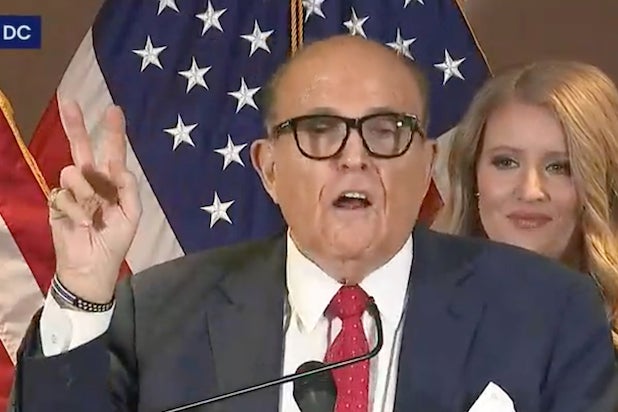 Rudy Giuliani quoted and re-enacted a scene from “My Cousin Vinny” — the 1992 Joe Pesci and Marisa Tomei comedy — during a press conference on Thursday, using the movie as an entry point to make baseless accusations of crimes committed by President-elect Joe Biden.

The former mayor of New York City called the film one of his favorite law movies because Pesci’s Vinny Gambino (or is it Joey Callo?) is from Brooklyn. He described the scene where a witness in the murder trial claimed she saw the defendants from 100 yards away, but when she puts on her ultra-thick glasses, she can’t tell how many fingers he’s holding up from just half the distance.

“Did you all watch ‘My Cousin Vinny?’ It’s one of my favorite law movies because he comes from Brooklyn,” Giuliani said in his press conference. In an effort to equate the film to ballot counters in Georgia, he added, “And the nice lady, she says she saw, he says to her, how many fingers am I holding up? And she says ‘three,’ because she was too far away to see that it was only two. These people were further away than ‘My Cousin Vinny’ was from the witness.”

You might also be asking, did he also put on a thick Brooklyn accent to mimic Pesci’s performance from “My Cousin Vinny?” Why yes, he did, though he didn’t go into the “two yutes” scene.

Giuliani is in Washington making various claims of voter fraud in the 2020 election, among them saying that Republican ballot counters were corralled and were so far away from the ballot counting that they couldn’t tell if something fishy was taking place. He then said Biden never gets asked about “all of the crimes he committed,” a baseless claim.

“Now, I don’t know, are you going to tell me that 60 people are lying? They didn’t just tell me this; they swore under penalty of perjury, which is something no Democrat has ever done,” Giuliani said. “You don’t even ask Biden about this. You don’t put him under penalty of perjury. He doesn’t even get asked questions about it, he doesn’t get asked questions about all the evidence of all the crimes he committed.”

Check out the clip of Rudy Giuliani re-enacting “My Cousin Vinny” below via Vox reporter Aaron Rupar.