SEBASTIAN SHAKESPEARE: On Her Majesty’s Secret Furlough! 007 producers’ got £100k from the taxpayer during lockdown

They’ve always been licensed to make a killing. But the producers of No Time To Die, 007’s 25th outing, due for release next April, have now excelled themselves.

Despite taking £700 million at the box office for the last Bond film Spectre, they have, I can disclose, taken advantage of the furlough scheme to create their latest blockbuster.

The details are buried away in the latest accounts reported by B25 Limited, a subsidiary of EON Productions, the parent company co-owned by Barbara Broccoli. 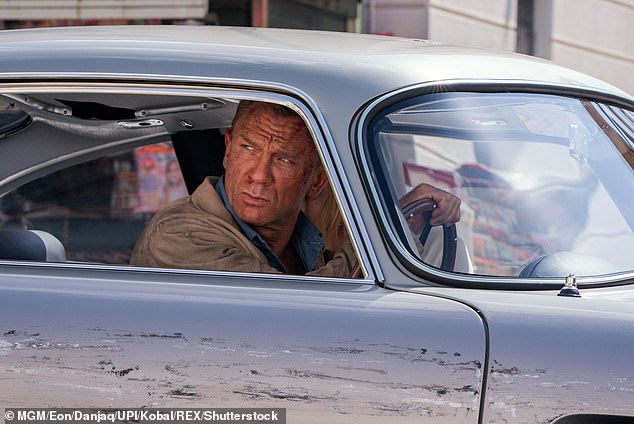 Pictured: Daniel Craig as James Bond in the next instalment of the franchise ‘No Time To Die’

But it requires the diligence of a Moneypenny to spot the figures.

‘Government grants totalling £95,487 have been received,’ B25 Limited acknowledges, ‘during the period under the job retention scheme . . . in relation to furlough costs for payroll staff in March to June 2020’. 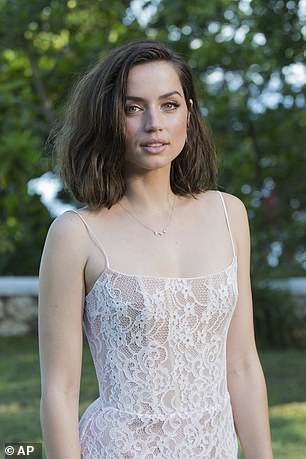 Actress Ana de Armas who features in No Time to Die

The company records that there were 25 on the payroll at the time, so each would have received £3,819 — barely a tip from 007 after a good night in the casino, and scarcely a blip on what is the most expensive Bond film ever.

With the cast ricocheting from Jamaica to Norway, and from Italy to the Faroe Islands, via London’s Pinewood Studios, No Time To Die has notched up costs of £213 million.

No less than £1 million of this is said to have gone to Fleabag creator Phoebe Waller-Bridge as a reward for her contribution to the script.

But her fee barely stirs the company cash-register when compared with Craig’s; the 52-year-old star is said to have trousered more than £18 million for his final outing in Bond’s tuxedo (pictured).

In addition to the grant for staff, B25 has claimed a £4.7million tax break. Eon declines to comment. But Broccoli, 60, will no doubt feel confident that her favourite British agent won’t let her down.

If Bond pulls it off yet again, perhaps she’ll be good enough to repay the furlough cash. After all, 007 is always On Her Majesty’s Service. 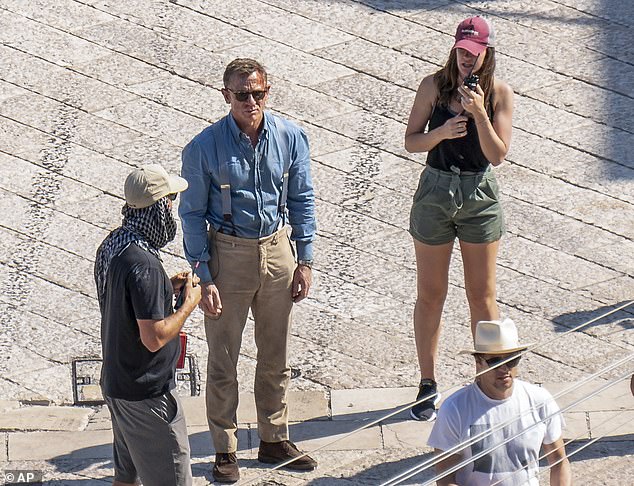 Actor Daniel Craig, second from left, is seen on the set of the latest James Bond movie ‘No time to die’ in Matera, southern Italy. The film’s release has been delayed to next year due to Covid 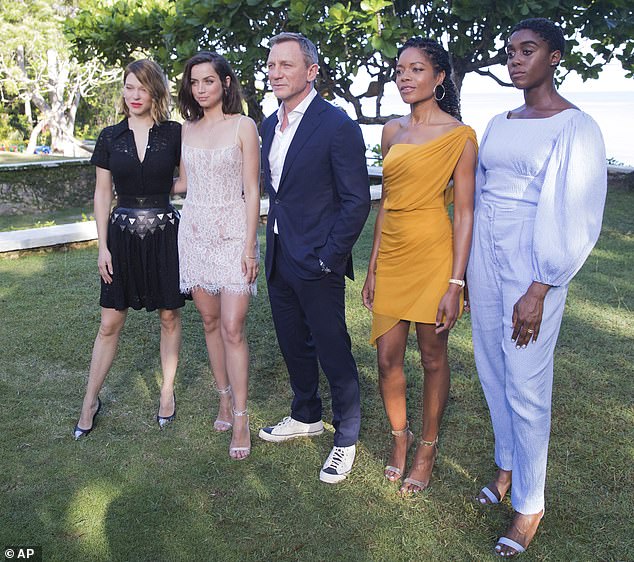 Victoria Beckham is famous for not smiling, so I am intrigued to learn one of her favourite paintings is Vermeer’s Officer And Laughing Girl.

‘As a relative newcomer to the world of Old Masters, I have spent time questioning, absorbing, and trying to understand more about this world of art I have been so lucky to be introduced to,’ says the former Posh Spice — who has a GCSE in art — in a new a book about celebrities’ best-loved art works published by the Frick Collection, a gallery in New York.

‘Vermeer’s Officer And Laughing Girl is the painting I’ve looked at the longest, the one I keep going back to for one more look, the one that captivates me.

‘I started reading about the painting because I had so many questions, and my questions seem to have been the same ones that others have had.

‘Who is the girl? Why is she smiling?’ Or why is she not smiling in Victoria’s case. 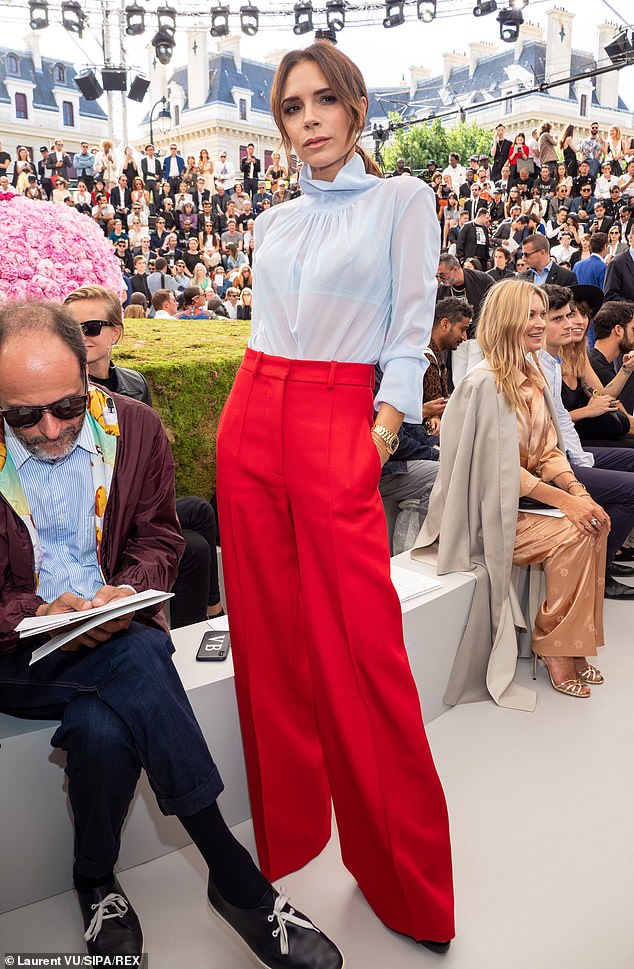 What a trouper! Dame Joan Collins braved ‘wild Wednesday’ by heading to one of London’s most fashionable restaurants at the very first opportunity after lockdown ended. The former Dynasty star and her husband, Percy Gibson, visited Colbert in Sloane Square for a welcome first lunch out in a month.

‘Joan looked as glamorous as ever,’ reports a fellow diner, ‘but she and Percy kept their face masks on when they weren’t seated at their table.’

The restaurant’s co-owner, Jeremy King, has been highly critical of Boris Johnson’s restaurant closures, telling the Mail Diary in October: ‘I can’t allow the stupidity of the Government and the Mayor [of London] to send us cowering into our homes.

‘We will be trusting the guests more than the Government does.’ 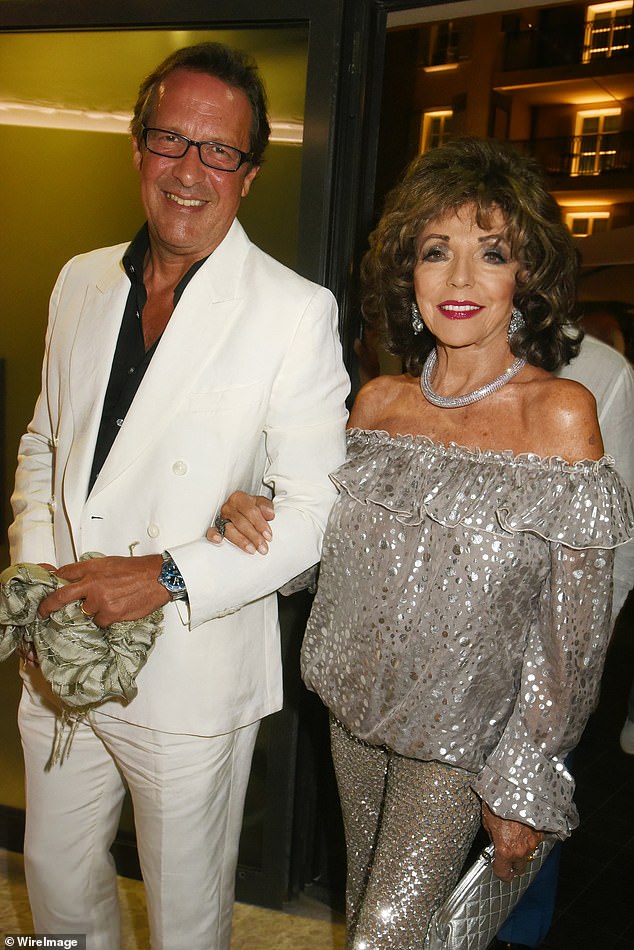 Are those Scotch eggs a ‘substantial meal’? Perhaps it depends how many you scoff.

The Fitzdares Club in Mayfair has introduced a ‘Bottomless Scotch eggs’ offer to its menu, at £30 per person.

Some might say it’s a dangerous policy, given the appetites of some of the porkers who frequent the private members’ club.

Whoever would have thought Simon Cowell could ever lack self-confidence?

The X Factor mogul admits he was a bag of nerves before he read at the Fayre of St James’s carol concert on Tuesday.

‘I was asked to read something for the event,’ he told the audience at the concert, which was streamed online due to lockdown.

‘I tried to memorise it, but I couldn’t.’ Cowell read Clement Clarke Moore’s poem A Visit From St Nicholas (better known as Twas The Night Before Christmas), from the comfort of his Los Angeles Mansion. ‘I’m not the best reader in the world,’ he added, ‘so forgive me.’

‘Most people think farming is either these huge ranches in America or Kate Humble with a newly-born lamb but actually most farms in the UK are somewhere in the middle,’ he tells me.

‘I want to say: “This is where your bread or vegetable oil or your beer comes from, or your lamb, and it’s not that bad.”’

The ex-Top Gear star is delighted to have reached agreement with Chadlington Parish Council, which complained he was not selling only local produce in his farm shop, in breach of planning conditions.

‘It’s for the council to represent the views of small numbers of people and it’s for the people to decide what the best course of action is,’ he says.

An unusually diplomatic answer from the one-time hungry pugilist. Perhaps Clarkson will stand for the parish council himself?

You Aunt half lucky, Sarah-Sofie

The 26-year-old from Denmark, whose mother is Helena’s sister, Anita Sonne, is sharing the spotlight with Helena in a new Stella McCartney campaign.

Helena, 51, posted pictures from the shoot — its theme was ‘Intimacy’— sporting a pink bodysuit while her niece wears a similar one in black. ‘We share everything that’s on our minds and in our hearts and that’s what intimacy is to me,’ says Helena. 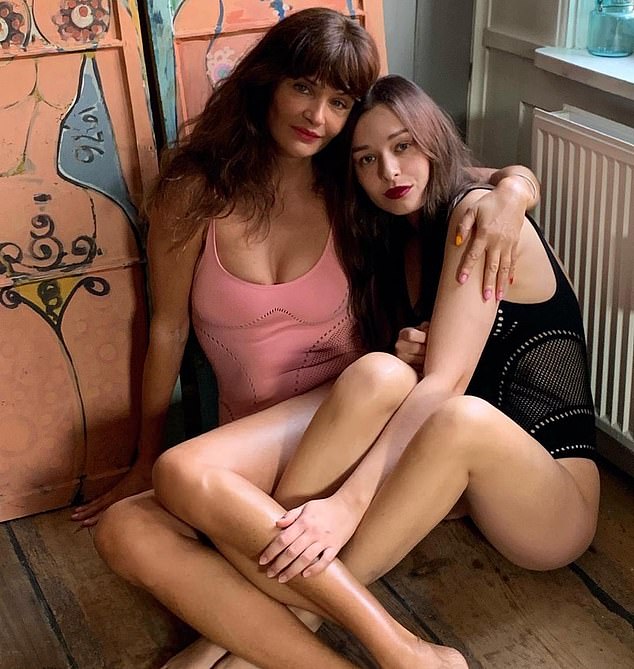 After feeling the chill in her Sussex home, style guru Susannah Constantine has found another way to keep warm.

‘My husband [businessman Sten Bertelsen] won’t have heating on in the day.

So with money saved I bought a sodding expensive cashmere dressing gown,’ admits Susannah, 58. who has splashed out on a £298 robe from The White Company.