Monday night was the big Hollywood premiere of West Side Story (appropriately held in NYC), and the whole town is buzzing about it. While the review embargo has not yet been lifted, the first reactions for Steven Spielberg‘s reimagining of the classic Stephen Sondheim (RIP) musical are out.

The problem with that? Ansel Elgort was credibly accused just last year of luring and sexually assaulting an underage fan.

For those who didn’t see the awfulness, a young woman named Gabby tweeted out her story — alongside a photo with the Baby Driver star and screengrabs of her alleged convos with him via direct message on Snapchat. She wrote about how they met, sharing the receipts:

“Ansel Elgort sexually assaulted me when I was 17. I had dmed him on when it was two days before my 17th birthday and I got his private Snapchat. I didn’t think he would ever see my dm I was just a kid and was a fan of him.”

She went on to detail how Ansel allegedly pushed her into sex despite her wanting to stop:

“So when it happened instead of asking me if I wanted to stop having sex knowing it was my first time and I was sobbing in pain and I didn’t want to do it the only words that came out of his mouth were ‘we need to break you in’.”

“I WASN’T there in that moment mentally. I disassociated myself and felt like my mind was gone I was in shock I couldn’t leave I was only 5’2 and 98 pounds. He made me think this was how sex was supposed to be.”

She also says Ansel knew exactly how old she was — 17, the same age as Rachel Zegler when she was cast to play the Baby Driver‘s love interest in the new movie. He was 20.

“I WAS SO YOUNG AND HE KNEW THAT. He as well said stuff like ‘you’re going to be such a beautiful young lady when you’re older’. I was f**king 17. He not only did that but asked me for nudes. I was only 17. As well as asked to have a threesome with me and one of my ‘dance friends’ they were as well underage and I didn’t tell anyone because he said it could ‘ruin his career’ i sat there for months wondering what I did wrong. Wondering why I felt so used. Years later I have ptsd, I have panic attacks I go to therapy.”

Ansel confirmed having had sex with Gabby but painted the events in a different light, calling it “a brief, legal and entirely consensual relationship.” 17 is the legal age of consent in NYC, but man when you have to describe your relationship as technically “legal” oof. It also seemed like he implied the young woman was just reacting out of spite because he hadn’t called her after breaking up with her. Classy.

However, after Gabby came forward, at least three others also shared claims online of Ansel reaching out to underage fans as young as 15 years old from around the same time — and yes, there were some screenshots of alleged DMs: 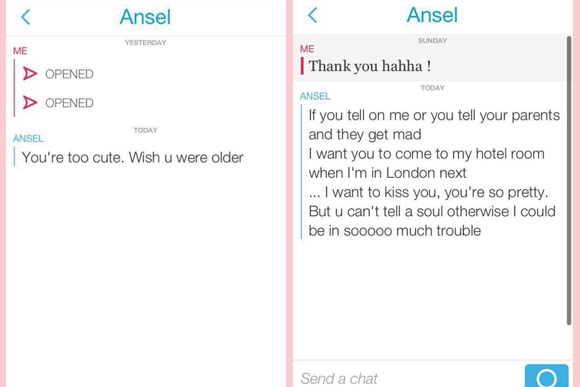 What might have been considered a “he said, she said” situation to some was now starting to look more like a pattern.

Even at the time we wondered how Spielberg would react, if he would delay the film and recast. But filming was already done. Sure, he could have pulled a Ridley Scott and digitally replaced his lead with Christopher Plummer, but instead he and 20th Century Studios (formerly Fox, now Disney) chose to ignore the allegations completely.

Now that the movie is getting glowing reviews, that is coming back to bite them a bit — as quite a few folks online clearly didn’t forget. Here are some of the responses to Ansel’s alleged past being swept under the rug by the mainstream Hollywood press machine:

“So just cuz the new West Side Story seems to actually be good we’re just going to praise Ansel Elgort while ignoring the sexual assault allegations against him? Like bestie there are other people we can talk about”

“Hollywood is so f**king hypocritical. They do their little events where they claim to support SA survivors, do the whole ‘Me Too’ thing, sell the stories of survivors AND THEN GIVE F**KING PLATFORM TO KNOWN ABUSERS.”

“The fact that Ansel Elgort is starring in this after that huge controversy last year. Ahhh to be a white rich man with connections!”

“now that west side story has debuted, here’s a reminder to not support ansel elgort. he deserves nothing and the fact that he was casted as a character who is romantically involved with an underage costars character is frightening”

“Please just reshoot the movie with anyone else other than Ansel Elgort. CGI in Paul Giamatti for all I care.”

Oh, and if it weren’t clear enough that DJ Ansolo isn’t fearing any fallout, at the premiere he said he watched his 17-year-old co-star perform at her high school after she was cast, so… yeah.