Gymnastics gold medallist Simone Biles has opened up about why her return to the mat at the Tokyo Olympics will be ‘symbolic’.

Simone Biles has opened up about the forthcoming Olympic Games, which will take place in Tokyo in 100 days. The decorated gymnast revealed the Games will be about much more than making it onto the podium, when she sat down with Hoda Kotb on the April 14 episode of The Today Show. “I just feel like [with] everything that happened, I had to come back to the sport to be a voice, to have change happen,” the 24-year-old began, referencing the abuse she suffered at the hands of convicted sexual predator and former Team USA Gymnastics doctor Larry Nassar.

She continued, “I feel like if there weren’t a remaining survivor in the sport, they would’ve just brushed it to the side.” Back in 2019, Simone, along with other gymnasts, bravely recalled the abuse Nassar inflicted upon them. The disgraced doctor is currently behind bars, serving a life sentence after more than 150 women said he sexually abused them. “Since I’m still here and I have quite a social media presence and platform, they have to do something. So I feel like, coming back, gymnastics just wasn’t the only purpose I was supposed to do.”

Simone added that she feels her purpose goes beyond the skills she displays on the mat. “I don’t think I knew [that was part of my reason], either, but I feel like gymnastics wasn’t the only thing I was supposed to come back for.” She previously opened up about the pressures of being one of the world’s greatest athletes in the Emmy Award-winning Facebook Watch Versus series, Simone vs Herself. 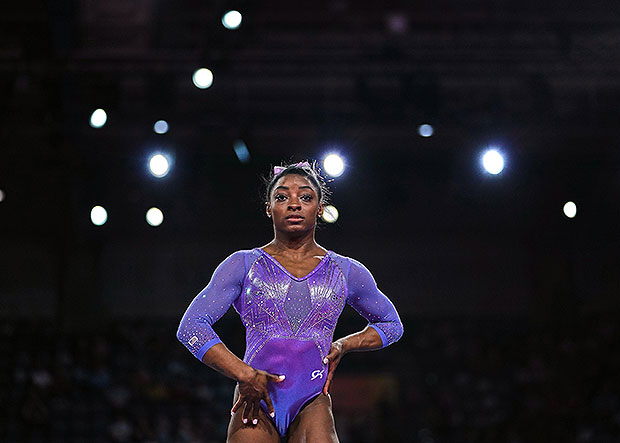 The five-time Olympic medalist was seen training for the upcoming Tokyo Games, which were delayed until 2021 due to the coronavirus pandemic. “Gymnasts bodies are like ticking time bombs … it’s like a nightmare, how to prepare for another year,” she narrates.

“Having to come back, am I going to be just as good? Can I do it again?” The series is set to debut in the summer, ahead of the Games in July. Simone continued, “My gymnastics career has been filled with a lot of ups and downs despite what a lot of people may think, and, in a lot of ways, my career has felt like I’ve been trying to prove myself to others.” We can’t wait to cheer her on at the upcoming Games!