British Ballet Amid the Palms 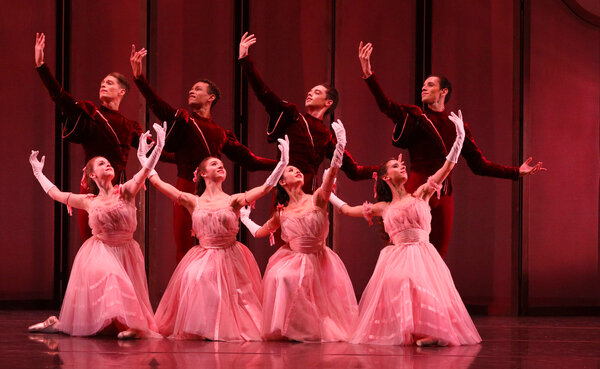 It was one of the happy surprises of dance in the 2010s: how the Sarasota Ballet, a scrappy troupe on the Gulf Coast of Florida, became a critical darling and one of the world’s prime preservers of the work of the great British choreographer Frederick Ashton.

Ashton isn’t all that Sarasota Ballet does, but the Ashton specialty is still what sets it apart. And the sixth program of the troupe’s digital spring season, available on its website from Friday to Tuesday, is all Ashton. (Tickets to the stream are $35.)

“Façade,” from 1931, is a show of early promise: a witty pastiche of popular dance forms and corresponding caricatures. “Valses Nobles et Sentimentales,” from 1947, is more mature, a ballroom fantasy overflowing with Ashton’s compositional brilliance. When Sarasota Ballet gave the work its American premiere, in 2012, it was considered nearly lost. Now it’s available online.
BRIAN SEIBERT

Pondering the Power of Pop

These are some of the questions that will animate this year’s Pop Con, a gathering of musicians and scholars who scrutinize the cultural significance of pop. The conference, which is hosted by New York University’s Clive Davis Institute of Recorded Music and runs Thursday through Sunday, is free and entirely virtual; schedule details and registration are available at popconference.org.

On Thursday at 6 p.m. Eastern time, the critic Ann Powers will moderate the conference’s keynote: a panel about making music in a volatile world with the artists Dev Hynes, Roisin Murphy, Rostam and Tamara Lindeman. The D.J. D-Nice will talk about Club Quarantine, his pandemic-era virtual party series, and how he leveraged his platform for good, on Friday at 9:15 p.m. Other program highlights include a round-robin tribute to Stevie Wonder’s “Songs in the Key of Life,” a gospel concert featuring musicians who straddle the sacred and the secular, and a slate of mentorship sessions for budding journalists, biographers and academics.
OLIVIA HORN

Returning to a Folky Fusion

The singer and composer Arooj Aftab can cover a lot of ground in a brief time frame. She might begin a piece by braiding Pakistani classical vocals around a riff that’s reminiscent of American minimalism. Later on, a part for keyboard might suggest the influence of jazz improvisation.

Her new record, “Vulture Prince,” is scheduled to be released on Friday by New Amsterdam Records. It represents a minor departure from 2018’s excellent “Siren Islands.” Whereas that earlier recording was more deeply meditative in nature, “Vulture Prince” finds her hewing closer to the folky fusion heard on “Bird Under Water,” from 2015.

The minimalist influence is still in evidence, though, as on the mellow yet buoyant single “Mohabbat.” And it’s also apparent — even if used for different ends — on the grooving trance number “Last Night.” This prerelease single is the kind of tune you might imagine Aftab and her band being invited to perform on an episode of “Twins Peaks.”
SETH COLTER WALLS

From Rags to Riches

You don’t have to love country music to love Dolly Parton. An actress, author and philanthropist as well as a singer-songwriter, Parton has inspired an online children’s workshop on Saturday that encourages recycling as much as it celebrates creativity.

The Country Music Hall of Fame and Museum in Nashville will offer the free hourlong program, Collage of Many Colors, at 11:30 a.m. Eastern time. Based on Parton’s picture book “Coat of Many Colors” and her autobiographical song of the same title, the event will present the story of an impoverished girl whose vibrant winter outfit is sewn from rags.

Participating families must register on the museum’s website to receive a Zoom link to the workshop, which will include looking at footage of Parton and artifacts like her stage costumes and handwritten lyrics.

After hearing the song and a reading of the book, children will work with Britt McDermott, an artist, to transform household castoffs like magazines, bottle caps and egg cartons into their own vivid art.
LAUREL GRAEBER

With Beckett in Their Minds

In all the missing of theater that we do these days, even as it inches back, we tend to gloss over a secret luxury of live performance — that there in the dark, we often let our minds cascade into private contemplation.

Claire Thomas’s novel “The Performance” toggles among three women at an Australian theater before the pandemic, watching Samuel Beckett’s “Happy Days” as their thoughts meander: Margot, a professor in her 70s whose husband has become violent in the grip of dementia; Summer, an eco-conscious 20-something usher, the one schematically drawn character; and Ivy, a 40-ish philanthropist embracing her second chance at motherhood after a long-ago tragedy.

Written in prose — except for the intermission, which takes the clever form of a dramatic script — Thomas’s novel is a way of thinking about Beckett’s text, and about how the ruminations a play prompts can change us before the curtain falls.
LAURA COLLINS-HUGHES