It was 1970, and the composer John Adams was tripping on LSD.

He was at the Marlboro Music Festival in Vermont, and he wandered into a rehearsal for Beethoven’s “Choral Fantasy,” with the eminent pianist Rudolf Serkin sitting at a Steinway.

Adams saw — or thought he saw — the piano begin to stretch into a cartoonishly long limousine. A similarly fanciful vision later came to him in a dream: He imagined driving down a California highway as two Steinway grands sped past him, emitting sounds in the heroic vein of Beethoven’s “Emperor” Concerto and “Hammerklavier” Sonata.

Both of these surreal episodes contributed to Adams’s eclectic and playful “Grand Pianola Music.” The piece, which premiered in 1982, had a turbulent early history, inspiring a rare chorus of boos and drawing criticism as a symptom of American consumerism. Yet many grew to adore it — enough to garner it multiple recordings, steady representation on orchestra programs and its own episode of the Los Angeles Philharmonic’s Sound/Stage streaming series, out Friday. 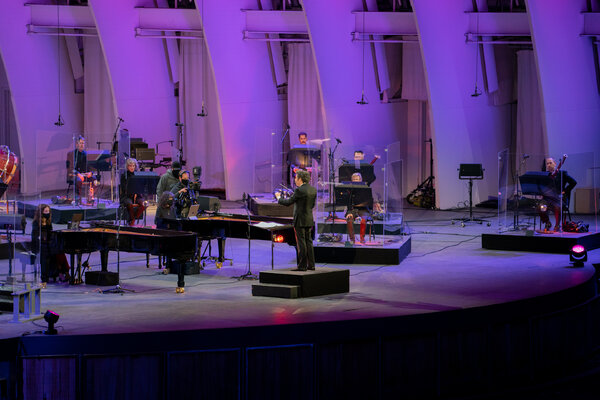 It was an acquired taste even for its creator. “I think I said something wry in ‘Hallelujah Junction’ about wanting to take ‘Grand Pianola Music’ behind the barn and shoot it,” Adams said in a recent interview, referring to his 2008 memoir.

“I’m glad I didn’t shoot it,” he added with a chuckle.

If audiences were slow to accept “Grand Pianola Music,” it may have been because they didn’t know what to make of its puckish rebelliousness. The beginning, a Minimalist shimmer, was familiar territory — albeit scored idiosyncratically for winds, brasses, percussion, two pianos and a trio of siren-like singers. But the finale was audaciously melodic and openhearted, in defiance of contemporary music’s persistent, thorny seriousness.

Elements foreshadowed Adams’s operas “Nixon in China” and “The Death of Klinghoffer.” At the time, however, “Grand Pianola Music” seemed a strange follow-up to the sensuous “Harmonium,” and not exactly a natural predecessor of the straight-faced and symphonically cosmic “Harmonielehre.”

“It begins like ‘Harmonium,’” Adams said recently. “Then I don’t know what happened. Instead of something that people would expect, this crazy thing happened where I got into B flat major, and the piano started banging away, and I learned something about myself: that I have a bit of Mark Twain in me, I guess, because I went with it.”

For the most part, though, “Grand Pianola Music” isn’t so grand. The introduction swells to a brief glimpse of the finale, but then gives way to serenity and a slow passage that recalls the spare beauty of earlier American composers like Aaron Copland. (In “Hallelujah Junction,” Adams describes the work as part of a family of pieces that “evoke the American-ness of my background, sometimes with wry humor and sometimes with a reserved, gentle nostalgia.”)

This first section takes up more than two-thirds of the 30-minute running time, but Adams said it’s the second and final part, “On the Dominant Divide,” that people tend to remember. It’s also what attracted the most criticism.

It starts with the pianos shimmering again, over flares of brasses that build tension until a wave of arpeggios flows from the pianists. As that subsides, a brazenly anthemic melody emerges, what Adams refers to in his book as an “Ur-melodie” that sounds familiar yet unplaceable. It is repeated, bigger each time and eventually bordering on tasteless, but held back from a tipping point by a delicate balance of irony and reaching a climax with the only text in the piece: “For I have seen the promised land.” In something of a coda, the ensemble recedes, then returns with its fullest sound yet, propulsive like a plane in takeoff — and ending just as it takes flight.

“John wasn’t in any way disguising some very wonderful, big, gestural, unabashed qualities that are part of his nature,” said the conductor Michael Tilson Thomas, who has led works by Adams for decades, including as the music director of the San Francisco Symphony from 1995 to 2020. “There’s a luxuriance in the sound, and I think a kind of ‘well, we all secretly admit that we do love certain things if we’re pressed into revealing it.’”

Adams conducted the 1982 premiere at the San Francisco Symphony’s New and Unusual Music festival. It was, he recalled, “a marginal catastrophe.” The singers performed with an operatic sound, which made him realize that the piece required voices with the directness of wind instruments. And people he respected frowned on the score.

“I really thought,” Adams said, “that I had made a mistake with this piece.”

Mark Swed, now the Los Angeles Times’s classical music critic, heard “Grand Pianola Music” soon after, at the CalArts Contemporary Music Festival — where, he said, its tunefulness took everyone aback, programmed among works by luminaries of the European avant-garde.

“People were bewildered,” he added. “We were still trying to figure John out. What happened? Did this guy go over to the dark side or what?”

Swed said that he was probably “pretty pretentious about it back then,” but that he didn’t not enjoy it: “I just didn’t know that it was OK to enjoy it.”

Then “Grand Pianola Music” traveled to the East Coast. The composer Jacob Druckman programmed it for the New York Philharmonic’s Horizons ’83 festival (subtitled “The New Romanticism?”) and insisted on conducting it.

The orchestra was under-rehearsed, Adams said, and at any rate Druckman didn’t have a lot of experience as a conductor. Heard on an archival recording, the piece’s crucial staccatos are imprecisely pronounced, and the finale is shockingly subdued.

Even more shocking, though, is the audience’s reaction. People tend to greet new music, even if they grumble about it on the way out the concert hall, with at least polite applause. There was some of that for “Grand Pianola Music” at Avery Fisher Hall; but there was also a loud contingent of boos. They cool off quickly, but roar back the moment Adams comes onstage to take a bow with the players.

“All it takes is two or three people,” Adams said, “and all you hear are the boos.”

Ursula Oppens, one of the piano soloists, grabbed Adams’s hand during the bows and told him: “Oh my God, they’re actually booing. Don’t you just love it?”

Who was booing, and why, is a bit of a mystery. Swed, who had traveled to New York for the Philharmonic concert, suspected an anti-West Coast bias; the audience’s reaction made him an immediate defender of the piece. The New York Times critic John Rockwell, who wrote in a review that the boos were “a telling tribute” to the piece’s “vitality,” later guessed that the hostility was “one way for determined musical modernists to protest the creeping tide of New Romanticism.” Indeed, a publication by IRCAM, the avant-garde French electronic-music institute founded by Pierre Boulez, compared “Grand Pianola Music” to the America of Disney and McDonald’s.

“We were still pretty seriously in the grip of very, very severe modernism,” Adams said. “There was this sense of gravity, that contemporary music was meant to be good for you in the way that spinach is. I think people thought I was waving my nose at the whole concept of a contemporary music festival.”

He wasn’t. “I think of composers I love — whether Verdi’s ‘Falstaff’ or Beethoven’s scherzos, or even those weird moments in Mahler where there’s humor,” Adams said. “And I’ve never been afraid of that.”

Episodes of levity recur throughout Adams’s music; he likened the ironically effervescent British Dancing Girl aria in “The Death of Klinghoffer” to the porter scene in “Macbeth.” From that perspective, the finale of “Grand Pianola Music” seems hardly outrageous or unusual — or at all deserving of its initial reception.

Adams came around on the piece, eventually deciding it was “not so bad” and finding that he enjoyed conducting it. He led the performance captured on a 2015 recording with the San Francisco Symphony, a double bill with his “Absolute Jest.” It’s an interpretation of sublime balance and articulation, the meaning of its finale — its nod to the Rev. Dr. Martin Luther King Jr. — elevated by a clearly presented reference to “the promised land.”

A new generation of conductors has also taken up “Grand Pianola Music,” such as Christian Reif, who presented it with members of the International Contemporary Ensemble at the Mostly Mozart Festival in 2018. When Reif told Adams about the coming performance, the composer responded, “Oh, you’re doing that silly piece of mine.”

“This piece has so many things that I love about his music,” Reif said in an interview. “The layering of sound, the color palette of a big ensemble, the simplicity and delicacy, but also the explosions and the big dramatic, heroic moments — he doesn’t shy away. It’s unabashed, and we reveled in it.”

In the Los Angeles Philharmonic’s Sound/Stage episode — which blends a recently taped performance at the Hollywood Bowl with landscape video art by Deborah O’Grady, Adams’s wife — the conductor Gustavo Dudamel calls the work “one of my favorites.” His reading is impressive if only because the piece’s challenges, its inflexible rhythms and demand for absolute precision, are all the more difficult with players confined to plexiglass cubicles.

“It’s a real document of the pandemic,” Adams said.

Even so, Dudamel marshals a performance that radiates uplift and awe, enough to make a listener wonder what all the negativity was about in the early 1980s. Looking back, Swed said, “it sounded like John was selling out.”

“But in a weird way,” he added, “maybe what he was doing was actually avant-garde.”