Scott Rudin, a powerful Broadway producer facing renewed accusations of bullying, apologized Saturday for “troubling interactions with colleagues” and said he would step aside from “active participation” in his current shows.

Rudin, who has won a raft of awards for prestige productions not only onstage but also in Hollywood, was facing renewed scrutiny over a long history of tyrannical behavior toward workers in his office following a recent article in The Hollywood Reporter. He made his apology in a written statement first given to The Washington Post.

“After a period of reflection, I’ve made the decision to step back from active participation on our Broadway productions, effective immediately,” he said in the statement. “My roles will be filled by others from the Broadway community and in a number of cases, from the roster of participants already in place on those shows.”

He acknowledged the concerns about his behavior, without detailing it. Through a spokesman, he declined a request for an interview.

“Much has been written about my history of troubling interactions with colleagues, and I am profoundly sorry for the pain my behavior caused to individuals, directly and indirectly,” he said in the statement. “I am now taking steps that I should have taken years ago to address this behavior.”

Rudin had a sizable slate of projects in the works, and his move appears intended to allow those projects to proceed without the distraction of protests about his behavior. 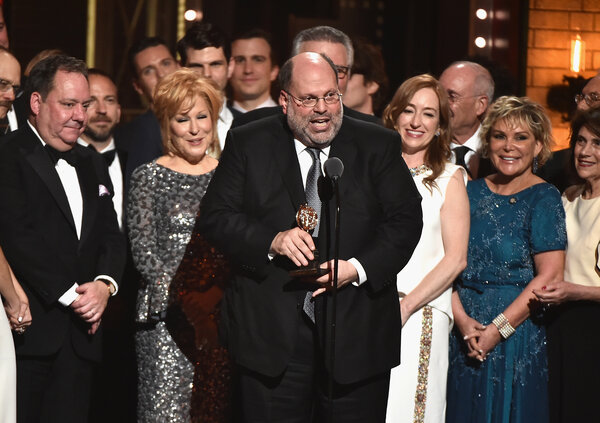 The most anticipated of his new projects was a revival of “The Music Man,” starring Hugh Jackman and Sutton Foster, that was scheduled to begin previews Dec. 20 and open Feb. 10.

But he also had three shows running before the coronavirus pandemic shut down Broadway that were candidates to reopen once full-capacity commercial theater rebounds in New York: “The Book of Mormon,” a long running and lucrative hit musical; “To Kill a Mockingbird,” a successful stage adaptation of the Harper Lee novel; and “West Side Story,” an adventurous revival of the beloved classic.

“My passionate hope and expectation is that Broadway will reopen successfully very soon, and that the many talented artists associated with it will once again begin to thrive and share their artistry with the world,” he said in the statement. “I do not want any controversy associated with me to interrupt Broadway’s well deserved return, or specifically, the return of the 1,500 people working on these shows.”

“Since news reports emerged about Scott Rudin, we have had many private conversations with our sibling unions and the Broadway League,” said the statement from the union’s president, Kate Shindle, and executive director, Mary McColl. “We have heard from hundreds of members that these allegations are inexcusable, and everyone deserves a safe workplace whether they are a union member or not.”

The union, joined by SAG-AFTRA and American Federation of Musicians Local 802, had issued a statement on Monday saying that “No worker should be subjected to bullying or harassment” but not mentioning Rudin by name.

Rudin, 62, has for years been a dominant figure in the American entertainment industry. He is among the handful of people known as EGOTs by virtue of winning Emmy, Grammy, Oscar and Tony Awards, and he was able to combine a keen eye for casting with relationships in the film and theater industries to put together many starry projects in both industries.

Although for a time he worked as a studio executive in Hollywood, in recent years many of his highest profile projects have been onstage.

But he has been dogged for decades by reports that he threatened, verbally abused, and threw objects at people who work in his office. And in industries with a long history of tolerating poor behavior by people who produce good art, he has largely continued to thrive.

Recently, he has been active as a producer of NY PopsUp, a series of performances funded by the state in an effort to remind people of the value of performing arts and to employ some artists during the pandemic.

But over the last week, following the publication of the latest story about his behavior, some performers had begun to publicly express concerns about his dominant role in the industry. When Karen Olivo, a Tony-nominated star of “Moulin Rouge! The Musical,” which was not produced by Rudin, announced a plan last week not to return to that show when performances resume, Olivo called on others to speak up about Rudin, saying, “The silence about Scott Rudin: unacceptable.”