Just when we thought this breakup couldn’t get any messier…Alex Rodriguez may have just taken things to the next level. He and Jennifer Lopez split earlier this year, after cheating allegations regarding Rodriguez and Southern Charm star Madison LeCroy surfaced through the media. Lopez seems to have moved on from A-Rod with one of her fan-favorite exes, Ben Affleck, and we couldn’t be happier to see her thriving. Rodriguez, however, seems to be doing just about anything he can to get Lopez’s attention, like renting a Hamptons home next to hers or strolling out of Katie Holmes’ apartment building in front of paparazzi. Who knows, maybe it is just a huge coincidence…but his latest stunt has us questioning his motives yet again. He was spotted hanging out with Affleck’s ex-girlfriend, SNL producer Lindsay Shookus, at a Hamptons party over the weekend and we’re not ready for this twist. 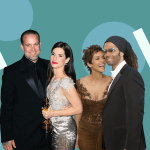 According to a video acquired by Page Six, Rodriguez and Shookus were seen chatting and seated next to each other at an outdoor party at the Hamptons. A representative of Rodriguez told the outlet that “there is absolutely nothing there,” but we can’t help but wonder how Affleck feels about this whole situation — or Lopez, for that matter, whose attention Rodriguez is likely more eager to attract.

Like we said, we’re just glad that Lopez has found happiness with Affleck and we’re hopeful that Rodriguez will move on in his own way soon — but all these A-list celeb pairings and former couples mixing and matching seems more like drama than moving on.

Before you go, click here to see celebrity couples who famously broke up and got back together.