On a drizzly morning in April, the artist Tschabalala Self, 28, straps on kneepads and pulls back her braids to kneel above a quilt-like painting. Her textile works are sewn from fabric scraps — brick-stamped canvas, Timberland-colored beige, acid-washed denim — and imagine black women and men in her home neighborhood of Harlem as exaggerated characters.

In 2018, Self became an artist-in-residence at the Studio Museum in Harlem, joining a formidable group of alumni that includes Mickalene Thomas, Kerry James Marshall, Kehinde Wiley, Njideka Akunyili Crosby, Julie Mehretu, Wangechi Mutu and Titus Kaphar. Since the museum is closed for renovation through 2021, MoMA PS1 will host this year’s show; on June 1, works by Self, as well as two other artists, will open to the public. Self’s body of work, called “Street Scenes,” is a series of eight paintings with trompe l’oeil brick walls that coalesce to form one scene — a narrative continuation of “Bodega Run,” currently up at the Hammer Museum in Los Angeles, her garishly lit installation of sculptural paintings depicting women in a neighborhood corner store.

[Coming soon: the T List newsletter, a weekly roundup of what T Magazine editors are noticing and coveting. Sign up here.] 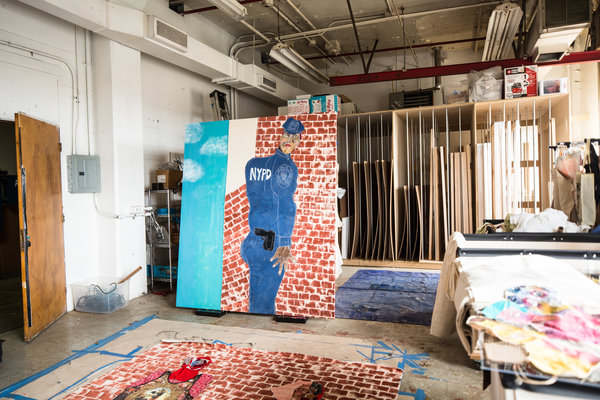 While the content of Self’s work — its characters, tropes, environs — is firmly rooted in Harlem, she works out of an early 20th-century industrial building in New Haven — a stone’s throw from Yale’s campus, where she graduated in 2015 with an M.F.A. in painting.

Looking out at a row of clapboard houses and an abandoned warehouse, Self’s fourth-floor studio is eerily quiet and flooded with light. The room is lined with figurative paintings stitched together with expressive black thread, as well as rough-cut wooden forms used to support three-dimensional works in progress. “I like to have the sculptures in the same room as the paintings for a good amount of movement,” she says. “It makes the space feel more activated.” Bouncing between two adjacent rooms — one dedicated to sewing intricate details and the other to cutting out large-scale sculptures — and sharing keen observations of Harlem and New Haven, Self answered T’s Artist’s Questionnaire.

What’s the first piece of art you ever made?

A stick figure. At my babysitter Mrs. Robinson’s house.

When you start a new piece, where do you begin? What’s the first step?

Usually with a drawing — either to scale on craft paper or a smaller study. I try to build out an idea with bits and pieces of scrap. If I’m working on an entire show, I’ll make sketches for each piece. It helps me think about how the works will relate to one another within the exhibition space. Once I begin working, I focus on one piece at a time.

But of course in making that one piece, I end up generating materials and debris for other works that will probably be part of the same body of work, just because of the nature of how I make the other elements.

How do you know when you’re done?

The piece has a certain level of balance to it — nothing is too little or too much.

What’s the worst studio you’ve ever had?

This is the only studio I’ve ever had. I don’t have anything to compare it to. The worst experience was after my flood — a pipe burst here the winter before last.

What’s the weirdest object in your studio?

Probably a hanging work-in-progress sculpture. That armature is stuffed pants that are my old jeans. I incorporate clothing that I love and can’t fit into anymore — but want to hold onto — into the paintings.

What do you usually wear when you work?

I usually wear sweatpants, a sweatshirt — a whole sweat outfit. Kneepads. Boots in the winter, sneakers in the summertime. Even though I shouldn’t, I do wear flip-flops in the studio in the summer.

How many assistants do you have?

Just one. She does graphic novels and is a native New Havener. I don’t know if there’s a name like Harlemite — New Havenite? I met her during my awful flood fiasco. I needed help cleaning up my studio, so I put out an open call on Facebook for people in New Haven. She came with her twin sister, and they helped me clean up my whole studio. It was probably the craziest and hardest thing that we’ve done together. I was like, “If you can do this, you can probably help me with everything else that I need in the space.” She’s been fantastic. That was such a dramatic, crazy situation, and she was 100 percent present for that.

What do you buy in bulk with the most frequency?

Probably fabric. From 34th Street, the garment district, or JoAnn’s. And nitro gloves, the disposable ones.

What was the last thing that made you cry?

I cried when I watched the Nipsey Hussle memorial service.

What do you listen to while you’re making art?

I usually play the radio. NPR. And I love Wendy Williams.

What are you reading?

I’m rereading “Black Boy.” Before watching the new adaptation of “Native Son,” I wanted to know a little bit more about the author, Richard Wright. So far it’s very good, really deep and sad. It gives me insight into what life was like for my grandparents in the South — and for people in my family that I’ve never met before.

Are you bingeing any shows right now?

“90 Day Fiancé.” It’s about people who have 90 days to get married because their fiancés are on a fiancé visa. A lot of interpersonal dynamics on that show.

What’s your favorite artwork by someone else?

I’m not the most punctual person. I’m always happy when other people are late — like they’re relieving some of my karmic debt in my own lateness.

An unrequited feeling or unreciprocated gesture. If someone sneezes, and I say, “God bless you!” and they don’t say anything, I say, “Ooh, I shouldn’t have even said anything.” Or I say hi to someone and they don’t say hi back. Being snubbed.

What do you pay for rent?

I’m not answering that question. It’s a secret. I don’t want anyone else out here. That’s a hint.

This interview has been edited and condensed. 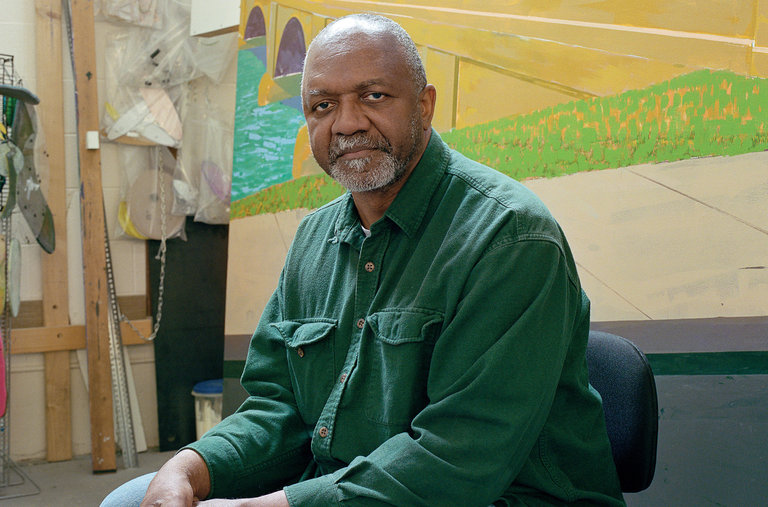 Anna Furman is a freelance journalist who writes about art, culture and travel.