Annie Lennox is talking about death. It isn’t morbid, nor is it vain, a celebrity’s ponderous concerns about her legacy. Instead, the former Eurythmics singer is matter-of-fact about being a woman of a certain age — 64 — and thus someone who has begun to look backward rather than forward. She is simply reminding me, in her earnest and rather sprightly way, that death comes for everyone.

“The one thing guaranteed us all, what is it?” she asks. “That we’re going to die.”

Such a statement may seem jarring, but since the 1990 breakup of the Eurythmics, the hugely successful pop music duo she led with Dave Stewart, Ms. Lennox’s concerns have become more grounded and existential. In the intervening decades, she’s released only sporadic solo albums — one of which is titled “Songs of Mass Destruction” — and took time off to raise her two daughters. Inspired, she said, by her experiences with Nelson Mandela’s 46664 campaign, she became an AIDS activist, focusing specifically on the plight of women and girls in Africa. She left behind the isolating force of fame for a chance to live, and maybe even make a difference in the world.

“In my time, I always thought that fame is a result of some really great thing you’ve done musically or artistically. It’s just a symptom,” she said, during a two-hour interview at a cafe in New York. “You play into it to a degree, but then, what does it do to you? I have tried so hard not to let that monster eat me up. I’ve dipped in, and I’ve dipped out. And it’s the dipping out that has kept me human.”

Her humanity is the subject of Ms. Lennox’s latest project, which reveals a more personal side of this musician that fans haven’t had a chance to see, in an entirely different medium: installation art. This weekend, at MASS MoCA in North Adams, Mass., Ms. Lennox will unveil a roughly 8-foot-high and 65-foot-long mound of earth containing nearly 250 objects she acquired during her life: the makeup case she used while touring, her mother’s sewing machine, a mask that was a gift from a boyfriend, Mexican Day of the Dead figurines, dozens of pairs of her children’s shoes, and more. The items are arranged in miniature displays that suggest associations and stories, and they’re embedded throughout a heap of glitter-dappled dirt, which is cordoned off by red velvet ropes. 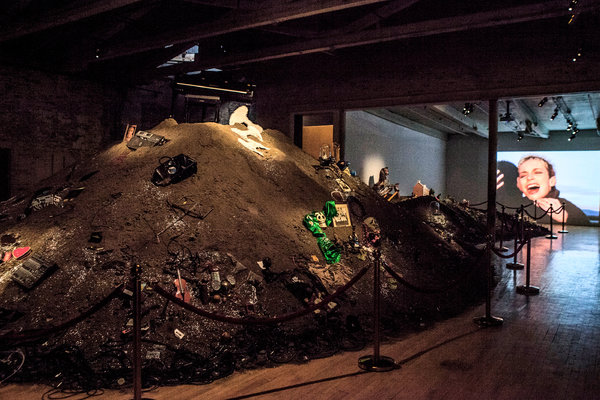 Atop the mound sits the object arguably most freighted with meaning: a piano. It is partially illuminated by a spotlight and set at a slight angle, like an off-kilter crown. “The piano has been so, so, so significant all through my life,” Ms. Lennox said. “Since I was 3 years old, and I was given a toy piano. And I picked out tunes, and my parents said, ‘Oh my goodness, she’s picking out tunes.’ They identified that I had a musical gift.”

The exhibition, titled “‘Now I Let You Go …’” represents a kind of cleaning house, both physically and emotionally. “I cried!” Ms. Lennox said. “I was confused about what to show — what was relevant, what wasn’t. But it’s beautiful that I can do this. Because we don’t have a ritual in the Western world for this. We just don’t know what to do with what’s left behind.”

The show’s curator, Alexandra Foradas, observed that Ms. Lennox thinks about objects “almost like mnemonic devices” that prompt our memories.

On my visit, the mood in the gallery was hushed, the lighting low and dramatic. Slow and gentle piano melodies rang out — songs improvised by Ms. Lennox, who calls them “butterfly music” for their calming effect. She has compiled them in an EP titled “Lepidoptera,” recorded years ago but released only now, free online, with the MASS MoCA show. “I want to soothe people,” she had told me.

“‘Now I Let You Go …’” feels partly elegiac. The mountain of dirt recalls ancient burial mounds and mass graves in addition to an archaeological dig. It’s accompanied by a field guide that features an introduction about the death of her great-aunt when she was a child. She identifies some objects in the guide with personal notes — like a teddy bear she considered for the cover of her album “Bare.” “He remains sad, pale and green till this day,” she wrote.

Her daughters’ shoes are ordered from largest to smallest on the mound, as if they were marching in a Benjamin Button–like procession of time. Barbie dolls and toy animal figures dominate the far end. Their plastic presence adds an environmental element, so that the installation seems, from a certain angle, like a reflection on the fate of the earth.

Some of Ms. Lennox’s music videos screen on the back wall, each silent and playing backward so that her expressive face and piercing eyes often loom over the whole space. Behind the mound is a small second gallery where “Sweet Dreams (Are Made of This),” one of Eurythmics’ biggest hits, plays in reverse with strange, engrossing distortions, while viewers marvel at the “Trophy Room,” a small chamber whose walls are tiled with Ms. Lennox’s gold discs. The display hints at parody, but it doesn’t fully come through.

Ms. Lennox said she hopes the installation will inspire reflection on “our common humanity.” But “‘Now I Let You Go …’” does hinge inescapably on the fact of her celebrity — and viewers’ interest may vary based on how curious they are to see casts of her teeth. Within the realm of celebrity crossover art, however, the work is notable for its critical self-examination. Leaving behind the alter egos and characters she spent years creating for music videos, album covers and photo shoots — celebrated in a 2011 exhibition at the Victoria and Albert Museum — Ms. Lennox has, in her seventh decade, deconstructed herself and her various personas for a compelling self-portrait.

“It’s an aspect of me that would’ve wanted to be an actual conventional visual artist,” she said, explaining that she had briefly studied art in school. She added, “I did extremely well.”

As a child growing up in a working-class tenement in Scotland, Ms. Lennox took refuge at the Aberdeen Art Gallery. But the musician, who now divides her time between London and Los Angeles, has no pretensions about starting a new career late in life and credits much of the success of the installation to MASS MoCA’s director, Joseph Thompson, who took her proposal for the mound seriously, and the curatorial and technical staff who made it a reality. “It is my dream,” she said, “and they’ve helped me realize it.”

Dreams came up frequently during our conversation. Ms. Lennox says she’s become increasingly attuned to life’s dreamlike quality, but as a songwriter, she has deftly captured it all along — it’s there in the synth pop of 1982’s “Sweet Dreams,” the 2007 power ballad “Dark Road, ” and in many other songs in between. Now she’s given that sensibility a physical form that is, ultimately, more fleeting than her music.

“If you had met me in the ’80s, I was in my youth,” she said. “I was experimenting and trying to figure it all out. I’m not saying I’ve figured anything much out, but one thing I’m starting to realize more and more is that life is but a dream, and we carry it in memory.”

She noted that in the hours after we finished our conversation, it, too, would start to fade.

Later, as if on cue, I realize I’ve already forgotten the color of her pants. And though the substance of her words stays with me, the particular lilt of her voice is gone.

An earlier version of this article misspelled the surname of the curator at Mass MoCA who worked with Annie Lennox. She is Alexandra Foradas, not Fodaras.