Only a few months after rekindling their romance, it looks like Ben Affleck and Jennifer Lopez might be getting ready to make a major move in their relationship — literally. The Argo director and “On The Floor” singer are reportedly considering moving in together, and it could happen very soon. “Ben and Jen are spending almost every night together when they’re not working,” a source shared with Us Weekly. “They plan on moving in together very soon.” 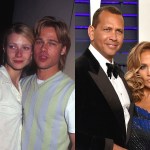 
These Celebrities Have All Been Engaged 4 Or More Times

There have already been clear signs that Affleck and Lopez are getting more and more serious. The two have been photographed out with their family — including Lopez’s 13-year-old twins, Emme and Max (shared with ex-husband Marc Anthony), and Affleck’s nine-year-old son Samuel (shared with ex-wife Jennifer Garner, along with daughters Violet and Seraphina). Plus, the two have been spending as much time together as possible, when their busy schedules allow it.

Now, it looks like the two are ready to prioritize their relationship and make the move. “As far as Jen sees it, she and Ben have their whole lives now to set things up in a comfortable way,” Us Weekly‘s source went on. “She intends to be an involved stepmom who’s there for Ben in that area, plus she’ll want him to make the same effort with her and Marc’s kids.”

Thus far, Affleck and Lopez’s renewed romance has taken them to Montana, Miami, and even their respective homes in Los Angeles. Although there hasn’t been much of a sign that Affleck’s two older daughters have spent as much time with Lopez as their younger brother, the seriousness of Affleck and Lopez’s romance could suggest that will occur soon. Still, these two have definitely picked up right where they left off!

Lopez and Affleck’s romance was a storied part of the early aughts. The couple got together in 2002 and quickly became engaged by November of that year. The couple was featured on practically every magazine cover, and tabloids dubbed the pair with the portmanteau “Bennifer.” While the two split in early 2004 and went on to marry new partners and have children, their recent breakups have brought them back together, and longtime fans are eager to see where their romance takes them next!

Before you go, click here to see a complete timeline of Ben Affleck and Jennifer Lopez’s relationship.