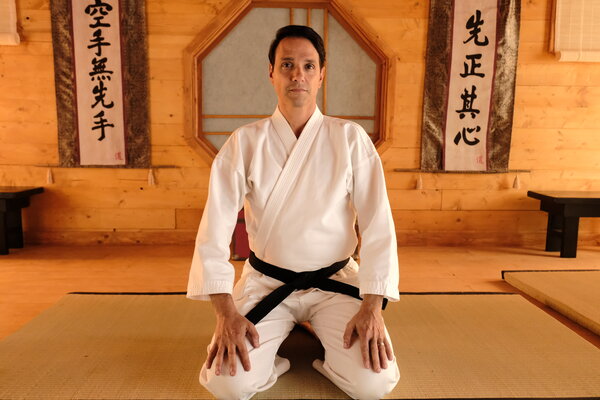 This article includes minor spoilers for the first two seasons of “Cobra Kai.”

Kids of all ages exited “The Karate Kid,” released that summer in movie theaters everywhere, looking for a chance to do some damage with a “crane kick.”

That was the move that the 16-year old New Jersey-to-the-San Fernando Valley transplant Daniel LaRusso (Ralph Macchio) used, in the movie’s triumphant climax, to defeat his classmate Johnny Lawrence (the New York-born William Zabka as the Platonic ideal of a rich SoCal brat) at the All-Valley Karate Tournament.

For the somehow uninitiated: After having some rough encounters with Johnny and hitting on Johnny’s ex-girlfriend Ali (a luminescent Elisabeth Shue), Daniel becomes pals with his apartment’s Okinawan handyman Mr. Miyagi (Noriyuki “Pat” Morita, who was actually a California native and yes, the character’s broken English was viewed as problematic even then).

After rescuing Daniel from a beat-down by Johnny and his pals, Miyagi teaches Daniel a centering defense- and chore-based karate (“Wax on, wax off!”), its organic goodness signaled by the amount of time they spend training in a rowboat. Fueled by inspirational ’80s bangers and plenty of Miyagi-wisdom, Daniel beats a host of cheating Cobra Kai teens — trained to fight dirty by the menacing Vietnam vet John Kreese (Martin Kove) — including Johnny, who never sees that kick coming.

“The Karate Kid” was a smash, inspiring sequels and a reboot, and neither Macchio nor Zabka ever quite escaped their breakout roles.

Macchio got decent parts here and there (”Crossroads,” “My Cousin Vinny”) while Zabka played essentially the same mean gent in ’80s comedies like “Just One of the Guys” and “Back to School” before showing off his sensitive side in the CBS vigilante show “The Equalizer.” Both could be found subsequently on the convention circuit.

Then a funny thing happened, as topics that were once dorm room chatter become common coin on the internet. A theory circulated: What if Daniel was actually the bad guy in “Karate Kid?” After all, he is kind of a jerk and starts more fights than he ends — what if “Karate Kid” gave Johnny a raw deal?

This is close to the premise of “Cobra Kai,” which debuted on YouTube Red in 2018 and then exploded in quarantine-driven popularity when it arrived on Netflix in August.

The show is not without flaws. “Cobra Kai” features exactly one important character of Asian descent: Kyler (Joe Seo), a horrible bully who is the primary villain in Season 1 until he suddenly isn’t. It also has an oddly cavalier attitude toward drunken driving, a cultural norm that was going out the window around the time Daniel moved to California.

Still, “Cobra Kai” is startlingly watchable, with an addictive, semi-serious tone that recalls pre-prestige television at its most deftly junky. Here are three reasons “Cobra Kai” has knocked out viewers.

The yin-yang of nostalgia and anti-nostalgia

“Cobra Kai” doles out callbacks and Easter eggs while pointing out what does and doesn’t work about the original characters.

Set 34 years after “The Karate Kid,” Johnny Lawrence is now an alcoholic handyman living in a trashed Reseda apartment.

He never got over Ali, and he’s so stuck in the 1980s (read: peaked in high school) that he refuses to acknowledge the internet and barely has a relationship with his son Robby (Tanner Buchanan, who really should be the one named Kyler).

Daniel, meanwhile, has parlayed his regional fame into a series of luxury car dealerships, complete with karate-themed ads, which means Johnny gets to see his rival’s smug mug plastered all over the Valley.

When Johnny rescues his teenage neighbor Miguel (Xolo Maridueña) from a beating (not unlike when Miyagi took on Johnny and his friends), Miguel makes the same demand of Johnny that Daniel made of Miyagi: Teach me your ways.

Johnny, both inspired by Miguel’s kindness and looking to make up for being a lousy dad, reopens Cobra Kai to teach “good, old fashioned, American karate” (delivered sans irony).

Of course, the series was pretty much obligated to hit certain beats — the Halloween dance, vintage cars, the crane kick and this knockout:

Miguel: “Hey Sensei, is there any particular way you want me to wash these windows?”

Neither man is particularly pure of heart or motive or anything. For example, Johnny is casually racist and sexist, though it’s presented more as throwback meat head-ism than genuine menace.

But it’s a testament to Zabka’s dry humor and smart pathos that Johnny is sympathetic at all. He’s not as comically evil as Kreese, but he still can’t help but see his old sensei as a father figure from whom he absorbed some terrible lessons.

Daniel, on the other hand, reads as smug by default, even when he’s trying to be a decent guy. He has everything he could possibly want, including an extremely patient wife, Amanda (Courtney Henggeler), who indulges his obsession, and a daughter, Samantha (Mary Mouser), who has karate skills of her own.

So his renewed rivalry with Johnny always looks like punching down. Amanda is the only one who recognizes how absurd all of this is, though she does so without ruining the fun.

“Oh, it’s fine,” she explains to a puzzled onlooker about the tension between Johnny and Daniel. “They’re in warring dojos.” This is both a good old-fashioned trope and completely insane.

Daniel and Johnny can’t help but be drawn into their old dynamic, and their offspring, both literal and otherwise, are sucked in with results somehow both clichéd and canny. Macchio’s performance is just as self-aware as Zabka’s; they are two men trying their best to be adults as the undercurrent of teenage trauma threatens to drown them.

It’s Hollywood tradition for an action movie sequel to at least double the stakes: Consider the somewhat grounded “First Blood” versus the bonkers “Rambo,” or the increasingly nuts “Fast and Furious” movies. Or the original “Karate Kid” franchise — the level of violence and possibility of death increase dramatically in the sequels.

Season 2 of “Cobra Kai” cranks everything up to full-bore karate opera: Bad guys become more villainous (hello Kreese, who still wants an army of teenage karate thugs for some reason); Johnny reaps what he sowed with his aggressive teaching tactics; and multiple rivals square off in an utterly ridiculous free-for-all that still manages to feel well earned, a smart build on a key scene in the first season.

Season 2 also ends on a double cliffhanger that could Change Everything when the show returns for Season 3. That’s coming in January.

In the meantime, I’ll be over here bitterly rehashing my high school rivalries … and crane-kicking this recycling bin.