On the first week of his original late-night talk show, David Letterman appeared on the streets of New York with a microphone in hand. “Much has been said about Alan Alda, the TV star, the film star, the writer, the humanitarian, the champion of minority causes,” he said in the grave voice of a “60 Minutes” correspondent. “But it’s surprising we don’t know much about Alan Alda, the lover of Chinese food.”

Then he interviewed employees of Chinese restaurants about what Alda liked to eat. A wonderfully dry spoof of celebrity culture, Letterman followed it with similarly deadpan ones investigating the dry cleaning, shoes and auto repair of the stars.

In the just-released second season of “My Next Guest Needs No Introduction,” Letterman, 72, is again asking about the mundane details of celebrity life, but this time, with total seriousness. When he sits down with Kanye West, he begins by inquiring about what he had for breakfast, his weight and what songs he sings to his children before bedtime. (“I freestyle,” West answers.) Letterman tells Melinda Gates, “My mother-in-law wants to know what music you and your family listen to.”

Over the years, Letterman has evolved away from his acerbic, experimental roots, but on his Netflix show, which centers on long conversations with famous people, he can seem like a bizarro version of the talk-show host who once revolutionized late night: a cheerful, earnest man, deferential to fame, a Letterman without irony.

No late-night talk show host ever displayed more antagonism toward show business. He didn’t just mock the obsession with celebrities; he teased them to their face, displaying studious indifference to the projects they were promoting and a smirking skepticism to their hints of pretentiousness, self-importance or eccentricity. When he said he had “an insatiable appetite about celebrities,” he clearly meant the opposite.

David Letterman once terrified stars (not to mention their publicists and managers) so much that the fear of being a guest was the subject of a short story by David Foster Wallace. Kanye West is exactly the kind of grandiose character whom Letterman would once have approached with rigorous Everyman sarcasm, and in their conversation, the rapper provided plenty of opportunity for eye rolls, like when he said he would know his work was done when there was world peace.

Letterman never went for the deflating joke. Much of this season’s conversations go by without laughs. Instead, with West, he asked for fashion advice and got a set of new clothes from West’s house that he showed off to Kim Kardashian. When Letterman, the Indiana-born broadcaster who was last fashion-forward wearing sneakers with a suit, told West, “I heard you refer to Hermès as the pinnacle,” I nearly did a spit take.

There was some brief conflict when they moved onto the subjects of President Trump (West said he didn’t vote, and Letterman balked) and #MeToo, the latter discussion seeming highly edited. West said men in powerful positions were afraid to talk about this issue, and Letterman, who faced a sex scandal that nearly derailed his career, responded that the fear men felt couldn’t compare to that of women. Then the conversation quickly shifted.

Letterman’s famously self-critical streak seems mostly absent. In fact, he is in a surprisingly good mood, delighted by Tiffany Haddish, effusively praising her talent and even giving her a foot rub. In an episode with the British racecar driver Lewis Hamilton, who as Letterman himself acknowledges probably does need some introduction for many people, he rides go-karts with a couple of kids. (Hamilton got his start racing karts, though this interlude still seems an odd detour.)

When Haddish starts dancing and encourages him to do the same, Letterman stands up awkwardly and later says: “I know I looked stupid, but I really enjoyed that.” For a man who once told Johnny Carson on the “Tonight” show, “I don’t know if you heard, but I have a policy. I don’t sing. I don’t dance. I don’t like to be near anyone who is,” this was an unexpected twist. 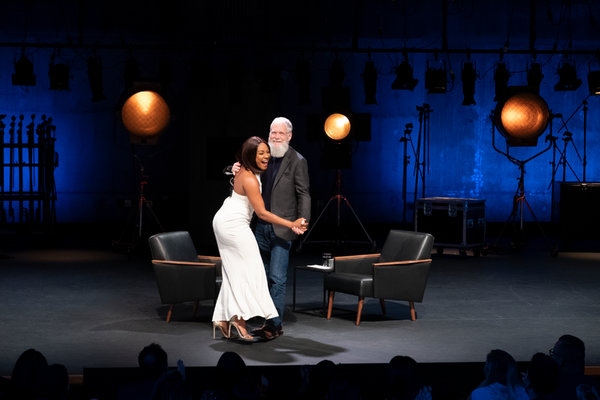 In the previous season of “This Guest,” Letterman made news by doing the first talk-show interview with President Barack Obama after he left office. He also spoke to some guests with whom he had long, friendly on-air relationships, like Howard Stern, Tina Fey and George Clooney. This new season is shorter (just five episodes) and the guests have less history with him. It’s tempting to imagine a version of the show that is more like Marc Maron’s podcast and digs deeply into tortured relationships from the past. (A reunion with Jay Leno or Sandra Bernhard could be fascinating.)

But Letterman doesn’t seem interested in looking back so much as discovering new things. He approaches these interviews with modesty, putting the spotlight on the guest, deferring to them, rarely challenging or probing too far. This strategy proves effective in the best episode, the conversation with Ellen DeGeneres, a fellow talk-show legend. For the first time, she opens up about her abuse at the hands of her stepfather, and when she brings it up, Letterman approaches it with sensitivity, allowing her to lead the way into wrenching detail.

Over the last decade of his late-night show, David Letterman shifted the emphasis away from comedy bits and toward long conversations with guests, and it’s understandable that he would grow out of some of his youthful snark.

Talk shows are chummier, less powerful institutions today, and being less than friendly to guests risks backlash on social media. That’s what happens to a Letterman-like host played by Emma Thompson in the forthcoming movie “Late Night,” a portrait of the world of talk show-hosting that offers more possibility for hope than “Larry Sanders” or “The King of Comedy” ever did.

Letterman speaks with Marc Maron on his podcast this week, and it’s a revealing conversation. He sounds like he’s looking for a new, redemptive chapter in his storied career, someone who now grasps there are more important things than comedy.

He regrets not having children earlier and talks about being medicated for depression and also about meditating. Distance from the daily grind has given him perspective on his old life. “Not being consumed by show business,” he says, “has made me a better person.”