As a reporter on the National Basketball Association beat, I am asked to cover two sorts of games in the social media age.

There are the games played on hardwood, which get no bigger than the best-of-seven N.B.A. finals series that begins Thursday night in Toronto, where the Raptors host the two-time defending champion Golden State Warriors.

And then there is what I like to call the Transaction Game: the chasing of the various trades, free-agent signings, hirings, firings and draft-day dealings that, maybe more so in the N.B.A. than in any other league, has almost become a sport unto itself.

Even with the Warriors poised to appear in their fifth straight finals, something we haven’t seen since the Bill Russell-led Boston Celtics made 10 finals appearances in a row from 1957 to 1966, there is no escaping the Transaction Game thanks to Golden State’s Kevin Durant and Toronto’s Kawhi Leonard.

Not only do they unanimously rank as two of the five best players in the world, but Durant and Leonard also are just a month away from becoming basketball’s two most coveted free agents when the marketplace opens.

You come to understand very quickly covering #thisleague, as I frequently refer to it on Twitter, that there is no avoiding discussion about the future in the modern N.B.A., even when we’re in the midst of what is supposed to be the pinnacle present.

I have a three-pronged theory to explain how it got this way over the past decade:

1) In a climate where every game is broadcast worldwide, with highlight plays circulated almost instantly via Instagram and Twitter, fans today see everything. Or almost everything. And that has made them thirst even more for updates on what they can’t see, such as moves their favorite teams may be plotting.

2) As Warriors coach Steve Kerr noted in February, many of the game’s biggest names feel as if “we’re all actors in a soap opera.” The N.B.A. has embraced social media’s ability to take us deeper into players’ lives, for better or worse, more than any other major sports league can. The result: Fans are now more invested in these “characters” and their backstories, travails and occasional feuds and flare-ups than they were at any point in my 26 seasons covering the league.

3) Basketball is a five-on-five game. In no other major team sport can the addition of a Durant or a Leonard so drastically change a team’s outlook. A marquee free agent would never go unsigned for 122 days the way Bryce Harper did in baseball last winter. One star, or even one smart or fortuitous transaction, makes such a bigger difference in the N.B.A.

That should explain why, in our industry, there is little finality associated with the finals. The N.B.A. draft is June 20 and free agency begins June 30 at 6 p.m. — moved up six hours into prime time by the league office so all the feverish reporting, tweeting and pestering of agents, team executives, players and other well-connected insiders by nosy reporters like me (toting both a BlackBerry and an iPhone) can play out on more platforms and to a bigger audience.

“It’d be nice if everyone could just pay attention to pick-and-roll coverage, but gossip is more interesting sometimes and we’re all part of that,” Kerr said.

Will the games prove sufficiently captivating to keep viewers tuned in from the 28 fan bases whose teams aren’t competing for the championship?

Such uncertainty weighs even heavier on the N.B.A. this June because the Warriors, for the first time in their dynastic run, aren’t facing LeBron James’s team. After leading Miami and Cleveland to a combined eight consecutive trips to the finals, the league’s most-recognizable player missed the playoffs for the first time since 2005. James has an early jump on his free-agent recruiting efforts as his Los Angeles Lakers plunge deeper into turmoil by the day.

Now for the good news: Warriors-Raptors, at first glance, appears to sport the potential to satisfy all audiences. There is intrigue for those who are and are not in a rush to skip ahead to one of the most eagerly anticipated off-seasons for potential player movement. 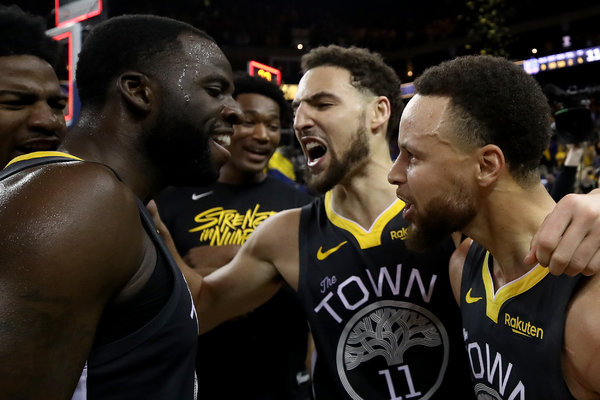 Provided that Durant recovers soon from a calf strain that has sidelined him for Golden State’s past five games (and ruled him out for Game 1), his individual duel with Leonard should be irresistible theater. There are also several compelling questions beyond that matchup covering both the present and the future — with a passport needed to answer them all in the first finals to be played in a Canadian city.

Can the Warriors easily reassimilate Durant after changing to a faster style of play without him and sweeping through Portland in the Western Conference finals?

Can the Raptors persuade Leonard, a Southern California native, to stay in chilly Toronto after the success they’ve enjoyed in this season’s fling?

Is Durant really poised to walk away from a franchise bidding for its fourth championship in five seasons to join the Knicks or the Los Angeles Clippers?

Does Leonard — unlike James in his final days with the Cleveland Cavaliers — have enough help to make this a series when Golden State, with or without Durant, can turn to the championship-tested quartet of Stephen Curry, Draymond Green, Klay Thompson and Andre Iguodala?

I eagerly anticipate the next four to seven games to figure it all out. The Transaction Game, at least for me, can wait.

Follow the @ReaderCenter on Twitter for more coverage highlighting your perspectives and experiences and for insight into how we work.

Marc Stein is a sports reporter specializing in N.B.A. coverage, with occasional forays into soccer and tennis. He spent nearly 15 years at ESPN before coming to The Times. @TheSteinLine • Facebook