From Married with Children to Sons of Anarchy to 8 Simple Rules to Dead to Me, Katey Sagal has been around the TV block. She’s a television legend in her own right, and now she is leading ABC’s new show Rebel, based upon the life of activist Erin Brockovich. We sat down with Sagal to discuss her long television career, equal pay, ageism, why she’s done playing the “wife,” and most importantly, why her show is filled with, as she describes, “male eye-candy.”

Sagal reveals to us that ABC was looking for a role for her, and when she read Krista Vernoff’s script for Rebel and had lunch with Vernoff and Brockovich, she says, “I got hooked. It was interesting and inspiring, and they were looking at a woman my age to lead the ship.” As for why she took on the role of Annie “Rebel” Bello, she says, it’s simple: “I like that the character had a messy personal life, three ex-husbands, three kids from different marriages, working mom trying to juggle it all, and really not doing great.” The lunch with Vernoff (Grey’s Anatomy) and Brockovich sealed the deal.

One of the best lines in the pilot is said by John Corbett, who plays Rebel’s third husband. “You care more about getting on the news than you care about getting home to cook me dinner!” To which every single woman in the scene responds, “To cook me dinner?!” Sagal reveals that the line was a “Krista Vernoff special,” and that their show “gender swaps” in many ways. For years, women have played the neglected spouse, and Corbett’s character is the neglected “housewife.” Sagal goes further, “All the guys are — hate to say it, but I will say it — definitely eye candy.” Neglected and beautiful. We’ll take it. Women have been doing it for years — at least on television. (And in real life. See “equal pay”). 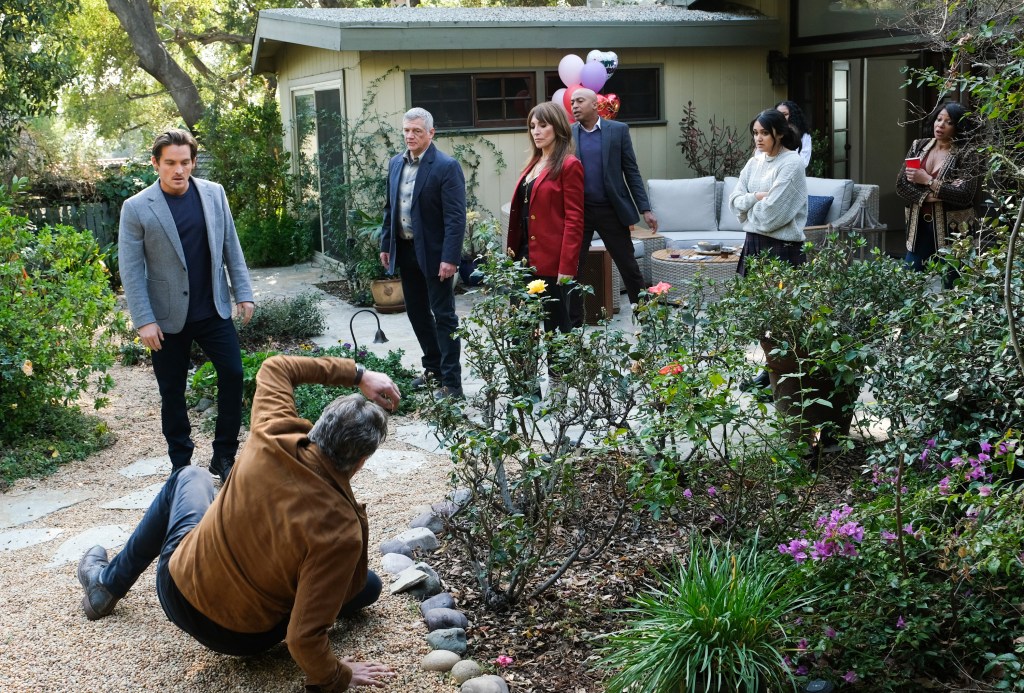 As a veteran of the entertainment industry, Sagal revealed to us some of the biggest challenges she’s faced. Ageism and getting roles that aren’t for “the mom” or “the wife of” have been tough. And of course, equal pay. At first, Sagal says she was lucky to have “favored nations” with the male leads of the shows she was on. But then she stops and realizes, “Now that I’m thinking about it, that’s not totally true.” This realization leads Sagal to admit that, if she could go back in time and change one thing, “I’d ask for more money.” She confesses she was always taught it was “crass” or “not lady-like” to talk about money. And she admits she’s been put in the “diva category” for “asking for what (she) should have.” Diva or simply asking for what she’s earned? You decide.

Sagal also has a few things she wants people to stop saying to women. “’You did that really well for a girl.’ They can stop saying that,” Sagal says immediately. Other things that she wants to stop: telling women they can’t do things just because of their age. And one of Sagal’s least favorite Hollwyood trends in shows and movies, when older men need to have super young love interests. Ahhh, ageism, it’s as old as time. Spoiler alert: Women don’t just disappear after the age of 50. In fact, we live longer than men, so see you forever. Sagal is happy that finally, more roles that aren’t just wife or mom are becoming a possibility for women as they age. Progress indeed. But just don’t ask her to make you dinner. She’ll kick the Brockovich out of you.

We also play a little flashback game with Sagal and all of her iconic characters, from Peggy Bundy (Married with Children) to Gemma (Sons of Anarchy), pop up. With her busy Rebel schedule, we had to ask if Sagal will return Dead to Me in Season 3? Let’s just say we learned at the exact moment Sagal herself did, but you’ll have to watch and see for yourself.