The 63rd annual Grammy Awards opened with splendor and star power on Sunday night, capping, almost to the day, a deeply challenging year for music during the pandemic.

With touring musicians grounded and fans stuck at home, and the music industry pulling in billions of dollars from streaming yet criticized by artists for failing to pay them fairly, the music world has been upended for the last year.

But the producers of the show promised a night of respect and togetherness, with a novel outdoor setting in downtown Los Angeles in which performing musicians faced each other while performing.

A shirtless Harry Styles, in a leather jacket and feathery boa, opened the night with “Watermelon Sugar” — up for best pop solo performance — while Billie Eilish nodded along admiringly. The sisters of Haim and the rock-soul duo Black Pumas held their instruments, waiting their own turns. It was a kind of television mirage — the kind of musical interactions that music fans used to see every night, but have been starved for since March 12, 2020, when virtually all live music shut down.

“Tonight is going to be the biggest outdoor event this year besides the storming of the Capitol,” the night’s host, Trevor Noah, announced at the start of the show, televised by CBS.

The Grammys are usually the music world’s big moment each year for glitz and self-congratulation, with flashy performances and the minting new pop royalty.

But this year the show itself was buffeted by the pandemic. Originally planned for January, it was delayed by six weeks because of rising coronavirus numbers in Los Angeles. And the event, normally a mega-production inside the Staples Center, had to be adjusted for safety.

“It’s been a hell of a year, but we made it,” Megan Thee Stallion said when accepting the award for best new artist, while downtown traffic roared and her fellow nominees sat before her, masked and socially distant.

Bruno Mars and Anderson .Paak debuted their new project, Silk Sonic, like 1970s “Soul Train” crooners in three-piece suits and wide lapels. (“I won’t bite unless you like,” they sang.)

Behind the scenes, though, the central dramas of the Grammys remained as strong as ever.

Beyoncé, the pop deity whose every move is hyper-analyzed online, was the night’s biggest contender, with nine nominations in eight categories. But though she went into this year’s ceremony a 24-time Grammy winner, only one of her previous awards was in one of the major categories, as a songwriter in 2010 for “Single Ladies (Put a Ring on It).” All of her other prizes were in genre categories far down the ballot — making her one of the many examples critics of the Grammys commonly cite when discussing the awards’ history of slighting of women and people of color.

In an early ceremony on Sunday afternoon, where 72 of the night’s 83 prizes were given out, Beyoncé took two prizes: best rap performance, as a guest on Megan Thee Stallion’s “Savage,” and best music video for “Brown Skin Girl” (which she shared with her 9-year-old daughter, Blue Ivy Carter).

Eilish and her brother, Finneas, shared an early prize for best song written for visual media, for the theme song to the latest James Bond film, “No Time to Die,” which was delayed early on by the pandemic and still has not been released. 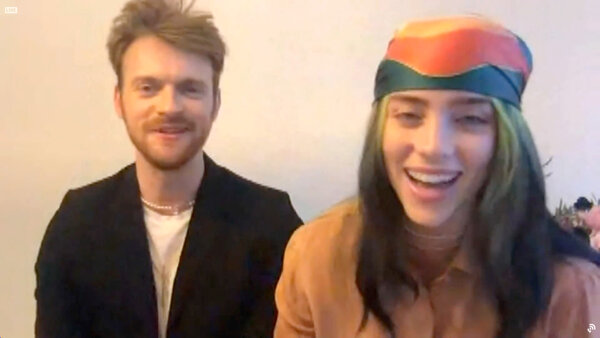 Early prizes also went to Fiona Apple, who won best rock performance for “Shameika” and alternative album for “Fetch the Bolt Cutters,” a huge critical hit. (Hours before the show began, Apple posted online that she would not be attending because of the scrutiny it brings.) The Strokes, who were among rock’s brightest lights in the early 2000s, won their first Grammy, best rock album, for “The New Abnormal.”

Taylor Swift and Lipa are each up for six awards, with music that reflected two sides of the pandemic. Swift’s pared-down, acoustic album “Folklore” was one of two last year she made in quarantine; Lipa’s disco-drenched “Future Nostalgia,” which was released just as the music world was shutting down last spring, provided a joyful release at just the moment when all of pop’s usual nighttime rites had vanished.

This year’s Grammys also brought to fever pitch some of the controversies that have been surrounding the show and its parent organization, the Recording Academy, for years.

After the Weeknd, the singer of megahits like “Blinding Lights” — and the performer at last month’s Super Bowl halftime show — was shut out of the nominations entirely, critics of the academy noted the tendency for Black artists to lose out in the top categories, and also attacked its academy’s practice of using unaccountable expert committees to make the final choices about nominations in 61 categories.

The Weeknd himself (Abel Tesfaye) told The New York Times last week that he would boycott future Grammys in protest of those committees.

The awards also capped a tumultuous year in the music industry, with musicians losing the vital lifeline of touring but the business that surrounds them riding the popularity of streaming to new financial heights on the stock market and in private deals.

Some musicians, like Bob Dylan, Neil Young and Stevie Nicks, reaped huge rewards by selling their song catalogs for sums in the tens or even hundreds of millions of dollars — figures that seemed impossible just a decade ago, when the music business was widely seen as a ruined ship, sinking in a sea of digital piracy.

To survive, musicians have sold what assets they could, doubled down on creating content and toured via live streams from their homes. Sarah Jarosz, who won best Americana album for “World on the Ground,” spoke to reporters on a Zoom call about making “lots of videos from here, in my living room, over the last year.”

The Grammys also highlighted the struggles of independent venues by having staff from four music spots — the Apollo Theater in New York, Station Inn in Nashville and the Troubadour and Hotel Café in Los Angeles — present four awards.

Jimmy Jam, the producer of Janet Jackson and the Time, who appeared in his characteristic black suit, hat and shades, announced the best R&B album award, which went to John Legend for “Bigger Love.”

Accepting from the podium, Jimmy Jam said: “I will accept this on behalf of John. Actually, he lives right around the corner from me. So I’ll drop it off at his house — socially distanced, of course.”

John Prine, the folk singer who died of Covid-19 last year at age 73, won two awards for his song “I Remember Everything.” Chick Corea, the jazz keyboardist who died of cancer last month at 79, also won two. Both men’s widows accepted their awards on their behalf.

Even in the Grammy celebrations themselves, hints came through of the tumult behind the scenes of the Recording Academy.

Controversies over the lack of minority representation at the Grammys went all the way down the ballot to the children’s music album category. Three of the five original nominees dropped out as a protest because no Black artists had been recognized.

Joanie Leeds, one of the two remaining nominees, won for “All the Ladies,” a tribute to great women, made with a long list of female collaborators. In her acceptance speech she cited a recent report about the poor representation of women in the music world, and sent a message to others in her field.

“We may be a small genre,” she said, “but we are really powerful. Let’s continue to be the change that we want to see.”