As the gray dawn spread over the coast of Normandy on June 6, 1944, revealing the legions of Allied ships staged to begin the D-Day invasion, a 25-year-old French aristocrat-turned-commando named Count Guy de Montlaur was told his squad would be one of the very first to splash onto the beach. Their mission was to take a seaside casino that held a Nazi stronghold.

Bobbing on a tiny landing craft, the young count, his green beret pulled low over one eye, replied to his commander that attacking the casino “would be a pleasure. I have lost several fortunes in that place.”

By the end of the battle, only 40 of the 177 French commandos who landed on the beach were still standing. The others had been shot down, blown to pieces, lost in the surf or felled along muddy roadsides. Montlaur survived and eventually became a hero of the French liberation, but he never got over the death and destruction he experienced that day. 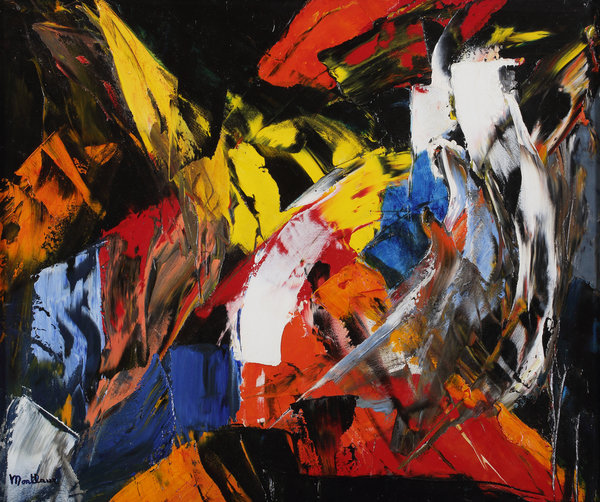 [Sign up for the weekly At War newsletter to receive stories about military history.]

He spent much of the rest of his life trying to work through those experiences through painting. Now, the National World War II Museum in New Orleans has collected his work in an exhibit called “In Memory of What I Cannot Say.” The D-Day images of grainy black-and-white panoramas of troops landing on the beaches that are so familiar from history books are replaced with abstract explosions of clashing color and violent angles that express a personal history of anguish and conflict for which the artist had no words.

“We don’t know what went on in his mind — like a lot of vets, he didn’t speak about it much,” says his daughter Dauphine Sloan, who is a professor of political science at Tulane University. “He couldn’t help himself: He had to paint. I think it was the only way he could think about all the things that happened.”

We tend to assume that soldiers who fought in World War II returned home unscathed, that psychological injuries like post-traumatic stress disorder only came with later generations. But Montlaur’s experience, like many other overlooked stories, shows how a generation often suffered in silence, looking for outlets to express their pain.

“They can’t guess all the distress here, right in front of them,” Montlaur wrote about the viewers of his paintings. “As it was during the war: the noise, the death, love, betrayal; the lies, and the fear. And still more that I cannot say.”

Montlaur was born in Biarritz to an aristocratic family. His father died when he was a young boy from lingering effects of being gassed in World War I, and Montlaur moved to Paris, where, through regular visits with his uncle to the Louvre and other museums, he grew into a promising painter. He graduated from the Sorbonne in 1938, and his art career was just about to launch when he was drafted. A year later the German blitzkrieg overran French and British forces, and Montlaur fought in a series of failed battles until France surrendered in 1940.

He escaped France through Spain and Portugal and joined the Free French Army in England in 1942, where he began training with an elite French force called the Kieffer Commandos. They were some of the first to land on Sword Beach on D-Day as Americans were landing on beaches farther to the west. Their faces darkened with camouflage paint and their packs weighed down with gear, they ran through withering fire to drive the Germans out of their strong point in the casino, then rushed inland to battle for a key bridge called Pegasus. Despite heavy casualties, they pushed farther inland, trying to take a nearby village where the allies had been beaten back by Nazi forces.

At the end of the war, Montlaur was awarded seven medals for valor, in addition to France’s highest honor, the Légion d’Honneur. An undisputed hero, he left military service and rarely spoke about it. But it emerged in his work. He moved to Manhattan to paint, and he lived there for two years before returning to France. For decades Montlaur painted and repainted scenes from combat. They cover the walls of the museum exhibit with expressions of confusion and horror. One, titled “One June Early Morning,” features a canvas slapped with heavy black strokes of paint that battle with fiery smears of red and orange, which together overwhelm delicate blues and whites.

Another, “On the Road Near Sallenelles, a Friend,” offers the abstract expression of a human face, discolored by gangrenous greens and flowing reds, the teeth jutted sideways into more swirls of heavy black paint.

“My father as a child painted landscapes, horses — his style was very classical,” Sloan says. “But after the war it is all increasingly abstract. As children we would ask questions about what he was painting. He would say, ‘You can see whatever you want.’ I think he just didn’t want to say.”

Montlaur exhibited his works often in France, where, while not well known, he was respected by other Abstract Expressionists. His work has rarely been shown in the United States, and never in such a large show as the National World War II Museum has assembled.

The canvases, on exhibit through Oct. 20, are a stark departure for the sprawling museum, where displays tend to focus more on the triumph and carefully restored weaponry of World War II. There is no shortage of bombers, fighters, tanks and cheery newsreels showing Rosie the Riveter cranking out equipment on the home front. But little time is spent on the more than one million American troops killed or wounded, or the hard-to-count psychological casualties who struggled to move on from what they witnessed on the battlefield.

The Montlaur exhibit offers a sobering counterbalance that shows the tremendous cost of the Allied victory. Included among the abstract paintings in a spacious gallery is a screen showing a United States Army documentary that focuses on the thousands of men who returned with what the film calls “battle neurosis.” The film, titled “Let There Be Light” and directed by John Huston, was finished in 1946 but was kept classified by the Army until 1981. Its scenes show a huge psychiatric hospital on Long Island where stammering young men smoke nervously or stare blankly as a doctor warns them about the stigma they might encounter from the civilian public. These sequences are as powerful today as they were nearly 75 years ago, and immediately make it clear why the Army would censor them.

Sloan remembers her father being happiest when he could pull on the old blue sweatshirt he always wore when working and turn silently to confront his canvas. It was, she says, his therapy. Montlaur died at 58, in 1977, and chose to be buried with his wife and fallen comrades in Normandy.

“His life was very difficult,” Sloan said as she looked at the angry slashes of color on a painting called “Pegasus Before Landing.” “But it shaped him. You know they say the Russian dissident writers were better because they were in opposition to something that they had to overcome? Maybe he is the same.”

Sign up for our newsletter to get the best of At War delivered to your inbox every week. For more coverage of conflict, visit nytimes.com/atwar.