We’re so over mom-shaming. Hilary Duff was mom-shamed for piercing her daughter’s ears. The Younger actress has been very open about her life as a mother and is no stranger to  unnecessary criticism for her parenting. But this latest judgment has us rolling our eyes. This week, Duff shared two pictures of her 7-month-old daughter Banks with her ears pierced. The photos show the newborn with small studs at her ear lobes. Little did the singer and actress know, the candid moment between mother and daughter would cause such a stir among her followers.

On Sunday, Duff posted a black-and-white Instagram photo of her and Banks, which shows the 7-month-old with small studs in her ears. Duff shares Banks with fiance Matthew Koma. A couple days later, Duff shared a second photo on her Instagram story, confirming that her daughter’s ears were indeed pierced. “Oh and yes we pierced her ears,” she captioned the photo. And that’s when the comments starting rolling in. 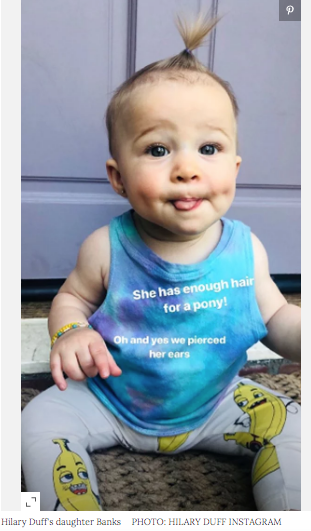 One follower commented, “Just wondering how she gave you consent to pierce her ears?” The same follower then shared that they would be “unfollowing” the former Disney Channel star because of the piercing.. Another person questioned Duff’s judgment, commenting, “Babies are beautiful, why would they need their ears piercing?” A few followers were rather aggressive in their statements, with one referring to piercing an infant’s ears as “unnecessary pain” and even going as far as to say the act was a form of child abuse.

But a few followers came the Duff’s defense. One even commented with their own story of their ears being pierced as a baby. “I am 51 yrs old and my sister and I had our ears pierced when we were babies as well and done with a needle,” the comment read. “I’m ok , I’m not traumatized and I don’t remember because I was a baby. People need to stop judging what other people do, and look at what goes on in their own home.” This isn’t the first time Duff has faced criticism for her parenting. Regardless, the singer and actress can rest knowing there are fans who will continue to defend her as she uses her platform to be honest about her experience as a mother.