Jacobson cocreated and stars in this new Amazon series, which expands the story told in Penny Marshall’s 1992 film.

In “A League of Their Own,” Abbi Jacobson was a player-coach onscreen and off.Credit…Chantal Anderson for The New York Times

Abbi Jacobson really can play baseball, she insisted. Just not when the cameras are rolling. “I fully get the yips when someone is watching me,” she told me.

This was on a recent weekday morning, on a shady bench with a view of the ball fields in Brooklyn’s Prospect Park. Jacobson lives nearby, in an apartment she shares with her fiancée, the “For All Mankind” actress Jodi Balfour. This morning, she hadn’t come to the fields to play, which was good — the diamonds swarmed with little kids. (It was good, too, because while Jacobson can play, I can’t, though she did offer to teach me.) And honestly, she deserved to enjoy her off season.

In “A League of Their Own,” arriving Aug. 12 on Amazon Prime Video, Jacobson stars as Carson Shaw, the catcher for the Rockford Peaches. Carson is an invented character, but the Peaches, a team from the All-American Girls Professional Baseball League, which debuted in 1943, are delightfully real. For five rainy months, on location in Pittsburgh, Jacobson, 38, had to catch, throw, hit and slide into base. Is some of this computer-generated magic? Sure, but not all. Which means that Jacobson played while plenty of people were watching. And she played well.

“She’s really good,” said Will Graham, who created the series with her. “Abbi is constantly self-effacing and self-deprecating but is actually a badass.”

Carson, a talented, anxious woman, becomes the team’s de facto leader. As a creator and executive producer, as well as the series’s star, Jacobson led a team, too, onscreen and off. This is work that she has been doing since her mid 20s, when she and Ilana Glazer created and eventually oversaw the giddy, unladylike comedy “Broad City.” On that show, she became a leader more or less by accident. On “A League of Their Own,” which was inspired by Penny Marshall’s 1992 film, Jacobson led from the get-go and with purpose, infusing the script with her own ideas about what leadership can look like. 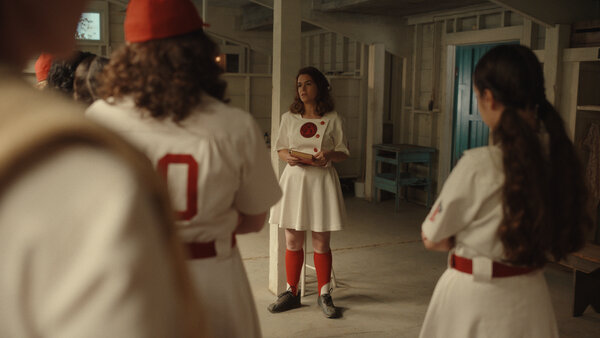 “The stories that I want to tell are about how I’m a messy person, and I’m insecure all the time,” she said. “And then what if the most insecure, unsure person is the leader? What if the messy person gets to own herself?”

So is Carson’s story her story?

“Kind of,” she said, squinting against the sun.

Jacobson, who has described herself as an introvert masquerading as an extrovert, is approachable but also watchful, an observer before she is a participant. Even in the midst of animated conversation, she has an attitude that suggests that if you were to leave her alone with a book, or a sketch pad, or maybe her dog, Desi, that would be fine, too.

Her favorite pastime: “I like to go and sit in a very populated area with like a book. Alone,” she said.

On that morning, she wore a white tank top and paint-stained pants, but the stains were pre-applied and deliberate, sloppiness turned into fashion. The bag she carried was Chanel. She didn’t look a lot like a baseball player, but she did look like a woman who had become comfortable in her own skin, who had cleaned up most of her private mess and put the rest of it to professional use.

“She’s a boss,” said the writer and comedian Phoebe Robinson, a friend. “And she knows herself in her core.”

Jacobson grew up in a Philadelphia suburb, the youngest of two children in a Reform Jewish family. She played sports throughout her childhood — softball, basketball, travel soccer — until she gave them up for jam bands and weed.

“That team mentality was very much my childhood,” she said.

After art school, she moved to New York to become a dramatic actress, then veered into comedy through improv classes at the Upright Citizens Brigade. She and Glazer wanted to join a house improv team, but team after team rejected them. So they created “Broad City” instead, which ran first as a web series and then for five seasons on Comedy Central. A “Girls” without the gloss, trailing pot smoke as it went, it followed its protagonists, Abbi and Ilana, as they blazed a zigzag trail through young adulthood. The New Yorker called the show, lovingly, a “bra-mance.”

For Jacobson, the show was both a professional development seminar and a form of therapy. Through writing and playing a version of herself, she emerged more confident, less anxious.

“Having this receipt of her anxiety in the character allowed her to look at it and grow in a different direction,” Glazer said.

In 2017, when “Broad City” had two seasons to go, Graham (“Mozart in the Jungle”) invited Jacobson to dinner. He had recently secured the rights to “A League of Their Own,” a movie he had loved as a child. He thought it could make a great series, with a few changes. The queerness of some characters — rendered in the movie through blink-and-you-miss-it subtext — ought to be more overt this time. In the film, in a scene that lasts just seconds, a Black woman returns a foul ball with force and accuracy, a nod to the league’s segregation. This, too, deserved more attention.

Graham had pursued Jacobson, he said, for her integrity, her smarts, her flustered, nervy optimism. He wanted the experience of making the show to be joyful. And he wanted the stories it told — particularly the queer stories — to convey joy, too. He sensed that Jacobson, who came out in her mid 30s, could deliver.

As Jacobson finished the final seasons of “Broad City,” development began on the new series. She and Graham threw themselves into research, speaking to the some of the surviving women who had played in the All-American Girls Professional Baseball League or in the Negro leagues. They also spoke with Marshall, via phone, before her death in 2018. Marshall had focused primarily on the story of one woman: Geena Davis’s Dottie. Graham and Jacobson wanted to try to tell more stories, as many as an eight-episode season allowed.

“The movie is a story about white women getting to play baseball,” Jacobson said. “That’s just not enough.”

Gradually the show took form, morphing from a half-hour comedy to an hourlong dramedy. Then it found its co-stars: D’Arcy Carden as Greta, the team’s glamour girl; Roberta Colindrez as Lupe, the team’s pitcher; Chanté Adams as Max, a Black superstar in search of a team of her own. Rosie O’Donnell, a star of the original movie, signed on for an episode, playing the owner of a gay bar.

The pilot was shot in Los Angeles, which doubled first for Chicago and then for Rockford, Ill. The coronavirus hit soon after, delaying production until last summer. Rising costs pushed the show to relocate to Pittsburgh, which is, as it happens, a rainy city, a problem for a show with so many game-day sequences. But the cast and crew handled it.

“There was kind of a summer camp quality to it,” Graham said.

And Jacobson, as Glazer reminded me, spent many years as a camp counselor. So a lot of that summer camp quality was owed to her. And to the incessant baseball practice she insisted on.

Adams first met Jacobson in the audition room. (As a longtime “Broad City” fan, she struggled to keep her cool.) On set, Jacobson immediately impressed her.

“I don’t know how she does it,” Adams said. “But even as a leader and the star of the show, she always makes sure that everyone’s voice is heard and included.” After filming had ended, Adams said, Jacobson kept showing up for her, attending the opening night of her Broadway show.

“It just melted my heart,” she said. “Abbi is the epitome of what it means to be a leader.”

Jacobson doesn’t always feel that way, but she feels it more often than she used to. “Sometimes I can really own that,” she said. “And sometimes I go home, and I’m like, how am I the person? Or what’s happening here?” So she lent that same self-doubt to Carson, a leader who evolves when she acknowledges her vulnerability.

But Carson’s narrative is only one among many in a series that celebrates a range of women’s experience: Black, white and Latina women; straight, queer and questioning women; femme women; butch women; and women in between. Many of the actors are beautiful in the ways that Hollywood prefers. Many aren’t.

Yet the show insists that all of these women deserve love, friendship and fulfillment. In an email, O’Donnell observed that while the movie had focused on one woman’s story, this new version gives nearly every character a rich inner life “in a beautiful and accurate way that brings the characters’ humanity to the forefront.”

Carden has known Jacobson for 15 years, since their early improv days. No one had ever seen her as a romantic lead until Jacobson dropped off a glove and a hand-drawn card (“Adorable and romantic,” Carden said) and invited her to join the team. Carden was proud to take the role and proud, too, to work with Jacobson again.

“She’s changed none at all,” Carden said. “She’s always been Abbi, but the confidence is different.”

Jacobson wears that confidence lightly. Glimmers of uncertainty remain. “I’m never the person that you’re like, She should lead the show,” she told me in Prospect Park.

But clearly she is. When no team would have her, she made her own, and now she has made another one. After an hour and a half, she picked up her purse and her coffee cup and she walked back through the park. Like a boss. Like a coach. Like a leader.