Jennifer Lopez and Ben Affleck are very, very wealthy, so you would think that they would be generous tippers — especially since they came from working-class families. However, if TikTok is to be believed, they may want to rethink their tipping strategies.

The story that seems to be making the rounds on the social media platform usually involves Affleck leaving a solid gratuity for the service worker and then Lopez grabbing the cash and leaving a smaller tip. That’s a serious allegation if there is even a sliver of truth because we all know how hard a customer service job is these days.

One former casino employee, who deleted the TikTok on the account, @JNguyen, claimed, “Ben Affleck has one of the worst reputations in the casino industry. We hate him. He’s cheap [and] rude to other players.” She then called J.Lo “stingy,” and then alleged that “[Lopez] tells [Affleck] not to tip. He doesn’t tip anymore, baby! You don’t need to tell him nothing, he ain’t doing it.” She then joked, “I am so happy he ended up with J.Lo. You guys are perfect.”

One person who isn’t shying away from the controversy is the account, @redpeppaflake, who dished on the rumors about Affleck and Lopez’s casino behavior. “Ben’s a great tipper, he respects service workers, and so he tipped a lot of people a lot of money that night,” she claimed. “Jennifer goes around to each of those people, and takes back the tip, and gives them maybe $5, $10 bucks—maybe.”

#stitch with @omg_jess True Story about JLo taking back tips

Another casino manager in Las Vegas doubled down on a second money-grabbing moment from Jenny from the Block. After Affleck tipped his waitress $10,000 after serving him, and only him all night, Lopez reportedly interfered. “She immediately snatched the money from the tray, said ‘Hell no,’ took it back. [Affleck] was so mortified that the next day, when Tiffany [the waitress] came into work, there was a note that said he profrusely apologized, was completely embarrassed, with a huge bouquet of flowers and $25,000,” according to @centamhain account. Neither Lopez nor Affleck have commented on these stories, but there seems to be a running theme throughout these tales. Are they just internet rumors or are there some poor tipping practices happening here?

Before you go, click here to see actresses over 50 who are more successful now than ever. 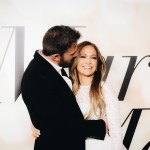 
Ben Affleck & Jennifer Lopez's Kids Are Reportedly Getting Along ‘Effortlessly’