Jerry Brandt, a promoter and entrepreneur who owned two nightclubs, the Electric Circus and the Ritz, that were attention-getting parts of New York’s music scene in their day, died on Jan. 16 in Miami Beach. He was 82.

His family said in a statement that the cause was Covid-19.

Mr. Brandt made a career of trying to catch whatever wave was cresting on the pop-culture scene. With the Electric Circus, which he opened in 1967 on St. Marks Place in the East Village, it was psychedelia. With the Ritz, opened in 1980 a few blocks away, it was the exploding music scene of the MTV decade, with the shows he staged there — Parliament-Funkadelic, U2, Tina Turner, Ozzy Osbourne, Frank Zappa and countless others — reflecting the exploratory energy of the time.

Not all his big bets paid off. Perhaps his best-known debacle was Jobriath, a gay performer whom Mr. Brandt backed with a lavish promotional campaign in 1973 and 1974, hoping to create an American version of David Bowie’s androgynous Ziggy Stardust persona. The concertgoing and record-buying public soundly rejected the attempt to manufacture a star, and Jobriath, whose real name was Bruce Campbell, faded quickly.

But Mr. Brandt’s successes, especially with the Ritz, caught their cultural moment and propelled it forward. At the Ritz, he not only booked an expansive range of bands; he also brought new technologies into the mix.

“The Ritz opened May 14, 1980, with a video screen the size of the proscenium arch it hung from,” the WFUV disc jockey Delphine Blue, who was a Ritz D.J. for five years, said by email. “On it were projected cartoons, movie bits, psychedelic montages, while the D.J.s played records and jockeyed back and forth with the V.J., who played music videos. This was over a year before the debut of MTV in August of 1981.”

Those We’ve Lost Read about others who have died in the coronavirus pandemic here.

There was, she said, a rope dancer who was lowered from the ceiling. There was a cameraman lugging a huge video camera around the dance floor, shooting the dancers and projecting the images on the big screen. The club was often packed and the chaos barely controlled. Sometimes it was not controlled at all.

“A full house at the Ritz began throwing bottles at the club’s video screen two weeks ago when the British band Public Image Ltd. performed behind the screen, refused to come out from behind it, and taunted the audience,” The New York Times reported in the spring of 1981. “Several fans then stormed the stage, ripping down the screen and destroying equipment. There was a moment of near-panic on the crowded dance floor, though apparently no one was hurt.”

Mr. Brandt was the center of it all. 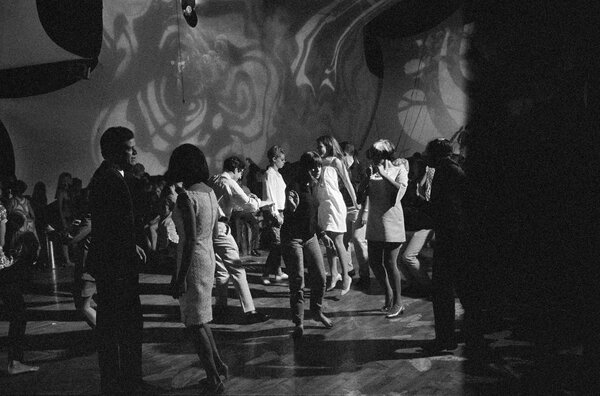 Jerome Jack Mair was born on Jan. 29, 1938, in Bensonhurst, Brooklyn, to Jack and Anna (Cohen) Mair. His father, Mr. Brandt wrote in his memoir, “It’s a Short Walk From Brooklyn, if You Run” (2014), left when he was 5. When his mother remarried Harold Brandt, he took his stepfather’s name.

After graduating from Lafayette High School in Brooklyn, he served in the Army from 1956 to 1958. Back in New York, he eventually got a job as a waiter at the Town Hill, a Brooklyn club that featured top Black performers like Sam Cooke and Dinah Washington.

“It was a dream come true,” he wrote in his memoir. “I could see great performers and make money at the same time. It made me realize that I wanted to be in the music business.”

In 1961 he went to work in the mailroom at William Morris, the talent agency. He did not initially impress his bosses, especially when he was given a courier assignment that required him to deliver an important contract to a Fifth Avenue office.

“Instead I went to Central Park, smoked a joint and was two hours late,” he wrote.

He was fired, but after a yearlong stint with another agency, General Artists Corporation, he was back at William Morris, this time as a talent agent. Among other acts, he represented the Rolling Stones when they made their first tours of the United States in the mid-1960s.

He opened the Electric Circus on June 27, 1967. It was a riot of music and psychedelic lights, and within a few months he had also opened a boutique on the second floor where customers could buy stick-on beauty spots or jumpsuits made of strips of colored crepe paper. The Times described the opening of the boutique this way:

“Her arms strapped to a high wire, a model in a purple and silver polka dot jumpsuit sailed through the air in the Electric Circus discothèque Monday night and landed in the arms of a man dressed as a gorilla. Then, as the walls crawled with protoplasmic blobs of colored light throbbing with the beat, the model and the gorilla began to frug.”

The entertainment offerings at the club ranged far and wide. The Velvet Underground, managed by Andy Warhol, was a regular attraction. The Grateful Dead, still an up-and-coming band at the time, played there in May 1968. A few weeks later, John Cage and the writer John Kobler played a chess match there on an electronic chessboard, their moves generating music of a sort. (“It was dark, it was hot, and to tell the truth it was lousy chess and lousy music,” Harold C. Schonberg wrote in The Times.)

You never knew who might show up, as Linda Raiterie, a puppeteer who was part of a politicized marionette show at the club, found out. One night Mr. Brandt brought some young men in as the puppeteers were preparing.

Let Us Help You Better Understand the Coronavirus