Welcome to Best of Late Night, a rundown of the previous night’s highlights that lets you sleep — and lets us get paid to watch comedy. If you’re interested in hearing from The Times regularly about great TV, sign up for our Watching newsletter and get recommendations straight to your inbox.

In clips released on Thursday from an ABC News interview, President Trump said he would willingly accept foreign intel on opponents in the 2020 election without alerting the F.B.I. The statement drew bipartisan condemnation, fueling calls for legislation requiring candidates to report such offers.

[Imitating Trump] “Sure, I mean a campaign accepting help from a foreign country is against the law, but since when is breaking the law a crime? I mean, do both. Why not do the wrong thing and the right thing? Let’s just kill two birds with one crime.” — STEPHEN COLBERT

“Apparently foreign dirt is the only import he won’t put tariffs on.” — TREVOR NOAH

[As Trump] “I’ve never called the F.B.I., not even when I fired the F.B.I. director. They had to hear it from CNN.” — STEPHEN COLBERT

“He honestly does not seem to know what collusion is. All he knows is he didn’t do it. But he would do it, because why not?” — JIMMY KIMMEL

“The guy who has spent two years screaming tweeting, ‘No collusion!’ is now saying ‘If anyone’s down the collude, I’m your guy!’” — SETH MEYERS

During the interview, Trump asked if he should turn down information from the likes of Norway.

[As Trump] “How about I get the dirt from a harmless little country like Norway or Sweden or Finland or just randomly heading east here, Russia? What’s the difference? Norway, Russia — both cold.” — STEPHEN COLBERT

[A Trump] “I’d listen to it, whether it’s Norway or Westeros or Wakanda.” — JIMMY FALLON

“Right now, you’ve gotta imagine Robert Mueller is just getting home with all his boxes after clearing out his office, turns on the T.V., and he’s like, ‘Damn it, honey, I’m going back to work. I’ll see you in another two years.’” — STEPHEN COLBERT

In a Thursday tweet about his comments on conversations with foreign governments, Trump mentioned he’d recently met with the queen of England and the “Prince of Whales.”

“Unless Trump secretly met with Free Willy, that’s not how you spell prince of Wales.” — TREVOR NOAH

“He literally just met the guy. Trump must have been so disappointed. [As Trump] ‘You’re not a whale! Where’s your blowhole?’” — SETH MEYERS

“Prince of Whales, fantastic guy. I threatened him with plankton tariffs, O.K.? I mean, I scared this guy. I got right up in his krill.” — STEPHEN COLBERT

“This is very nice, though. Trump apologized for the mistake by tweeting, ‘Sorry price of Wales. Sincerely, Prince of Walls.” — JIMMY FALLON

“Which means the president may be in contact with Aquaman for all we know.” — JIMMY KIMMEL

“White House press secretary Sarah Huckabee Sanders is leaving her job. Yeah. Her next job should be much easier. Apparently she’ll be doing PR for Bill Cosby.” — CONAN O’BRIEN

“We know that this is true because she’s denied it.” — TREVOR NOAH

“In a statement, Sanders said nothing, as usual.” — JIMMY FALLON

“She’ll leave the way she usually does, in the middle of someone’s question.” — SETH MEYERS

“When reporters asked the president who his new press secretary would be he was like, ‘Twitter.’” — JIMMY FALLON

“Nothing’s official has been announced yet, but sources inside the White House believe she will be replaced by a box of T.G.I. Friday’s loaded cheddar and bacon potato skins.” — JIMMY KIMMEL

Desus and Mero went in for a meeting with Showtime’s standards and practices department, where they had to answer for a few unfamiliar and potentially offensive phrases. 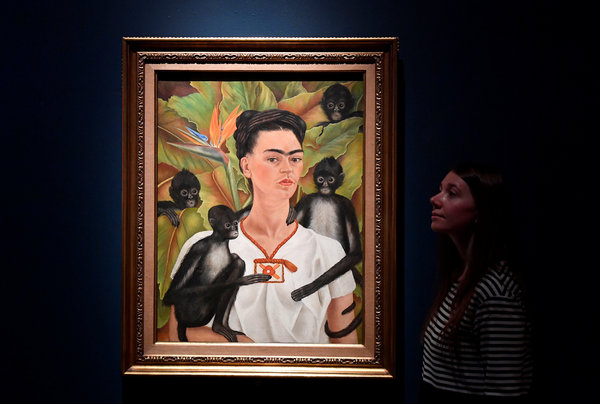 The only known audio recording of iconic artist Frida Kahlo’s voice is now available to hear at the National Sound Library of Mexico.