A decade ago, the comedian Lilly Singh started making videos out of her parents’ house in Scarborough, an inner suburb of Toronto. She swiftly attracted viewers with her vibrant, goofy impersonations, many to do with diasporic Punjabi family dynamics, embedded in comedic sketches.

Her YouTube channel may boast nearly 15 million subscribers, but these days Singh’s bona fides come from a different space. In 2019, she was the first openly bisexual woman of color to front a late night show (“A Little Late With Lilly Singh”) as well as a first among YouTube phenoms. She’d done the impossible: made it out of the bedrooms of internet-addicted kids and into the bedrooms of their parents. But the late night format isn’t quite right for the D.I.Y. star. Season 2, which premieres Jan. 11 on NBC, leaves behind the standard couch-and-desk setup for a set in a house that will allow her to move and experiment. She released a statement about her hope to get more goofy and authentic. And she’s backed by an all-new staff, after a season that drew mixed reviews.

She’s going back, in a sense. These days, she’s shooting her YouTube videos in her own house in Los Angeles. (A byproduct of making millions while being a good Punjabi kid who lives at home is you can eventually move out.) “I have gone full circle,” she said about her latest parody videos — a recent one tracks a woman on a Zoom date. “The pandemic forced me to go back to my roots of shooting by myself, editing the video, doing all the lights and sound and camera stuff that I used to do. Building the tripod on books like I used to do.”

Lately Singh has been examining her priorities. At 32, she’s on the cusp of a time in adulthood that might inspire a reconsideration of quick success. The solitude perhaps enhances the moment. This year marked the longest she has gone without seeing her family. “I’m sure people can relate when I say I’ve been in a state of numbness,” she said with a laugh. “And confusion, and being lost. But I also think there has been this kind of sweet silver lining, a little bit. I learned what actually matters. Before, I was on autopilot.”

On set, she has been inspired by small hacks: a face mask designed to not smudge her makeup, the know-how of an on-site Covid-19 compliance officer. “He would measure out the dimensions of the house and based on that, on the spot, would be like, ‘OK, four people could be in this room,’” she said. “That we’ve figured out what could be the safest way to do this is really impressive to me. Being like: ‘Hey, we’re not going to stop telling stories. We will somehow adapt.’”

In a phone call from Studio City in Los Angeles, Singh tracked her cultural diary for a few days in late December, which included plenty of comfort watching, and Bollywood listening. These are edited excerpts from the conversation.

I turned on my TV and I saw “Wonder Woman 1984” everywhere. I’m not going to lie: I didn’t even know it was coming out. But I loved it. The first time I saw [the first] Wonder Woman in the theater, I was sitting behind a row of girls who were in tears.

“The Lost World: Jurassic Park” is actually trending on Netflix, which is why I watched it, apparently with millions of other people. I love “Jurassic Park,” the entire franchise, so so much.

As a person who grew up in an Indian culture, I feel like I watch “Big Mouth” because it seems so far from what I was allowed to be like as a kid. I watch it like, Oh my god, this is so bad. They’re so crude. My parents never had those talks with me, and I never learned about that stuff in school. So for me it’s just like a vicarious redoing of childhood.

I really like ’80s and ’90s Bollywood. “Hum Aapke Hain Koun..!” “Pardes.” If you go really, really back — “Ishq” (1997), with Aamir Khan. Old school. I have a very long playlist that I, true story, spent three to four hours making a couple of weeks ago. I have two: Bollywood Chill and Bollywood Dance. I listen, like, if I’m in the shower, if I am cleaning my room, if I’m washing the dishes, if I’m cooking. 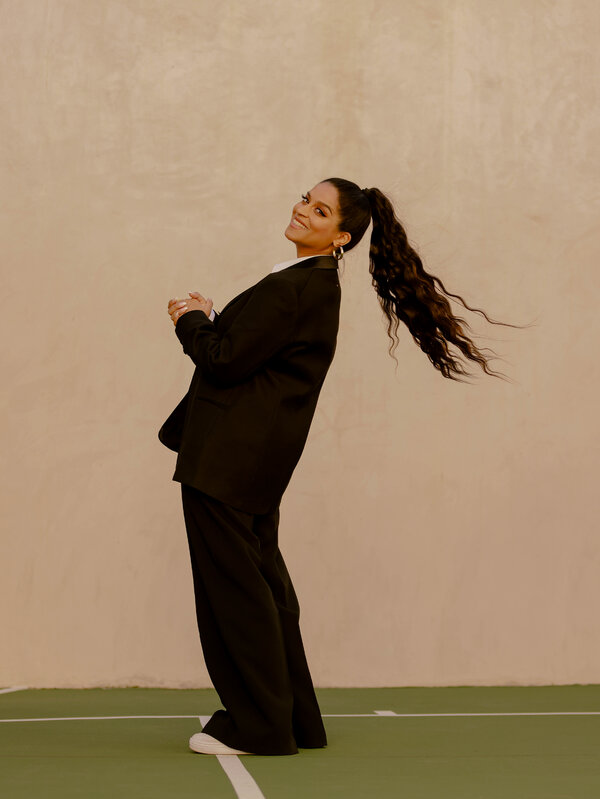 I deleted social media off my phone many many months ago, so I don’t have anywhere to mindlessly scroll. However, if I do have a spare second, I check out the Deadline app — probably every morning and every night. I like to know what’s going on in film and TV.

I decided to watch the original “Karate Kid.” Over the holidays, I also rewatched “Home Alone.” When you rewatch these older movies, it’s a whole new experience! There’s so many jokes and scenes and references that I did not understand as a child but when you rewatch them it’s so enjoyable.

I haven’t watched it yet — but “Selena” just premiered on Netflix a little while ago. Of course, I knew [her] songs growing up, but I wasn’t too familiar with the Spanish ones, and I’ve just become obsessed. It’s just such feel-good, amazing music.

I had no idea what Pixar’s “Soul” was about, and I was blown away. I thought it was so well executed, and visually stunning. The character was just so lovable. It could have very well been a real person that was not animated, someone I would have met on the street.

A lot of the reading I’ve done over the past weekend has been related to Season 2 of my show.

I have this rule for Season 2, where to the best of my ability, I do not want to talk about things or interview people or discuss projects unless I actually genuinely know them. I have no desire this season to fake knowing things or fake seeing things. I think it’s so inauthentic, and I don’t want to do it anymore. So, to the best of my ability, I’m going to try to watch every single thing I reference, which is why I started watching “The Queen’s Gambit.” I am hooked.

I’m a big fan of these days of watching things without any context. I don’t like to watch trailers or anything. I just like to be thrown in, and that’s exactly what happened with this. I know nothing about chess. But I think it’s a cool story, and I think the actress is brilliant. I’m a big believer of supporting stories and projects that feature strong women.

I subscribed to The Skimm. My manager right now, Kyle — he introduced me to it. I love the way it’s literally a skim of the news. You can be in the know without feeling all of the stress of the world on your shoulders.

Because I’m not the most savvy with news sources, especially coming out of India, I’ve been following @sikhexpo a lot, which is an Instagram account. When you’re not on the ground somewhere it’s easy for misinformation to spread, and especially with things like the farmer protest, where it’s not covered by the media as thoroughly as it could be, they’ve been a great resource for me to learn what’s happening on the ground.