“I’ve been the first woman to do a lot of things, and I’m really proud, but I also think it’s absolutely pathetic,” Marin Alsop, the first woman to lead a major American orchestra, the Baltimore Symphony Orchestra, said in a conversation with Michael Cooper, the classical music reporter for The New York Times.

Her point? Such ground should have been broken long before.

“The thing about trying to work as a woman 30 years ago, 35 years ago, is there were no opportunities,” said Ms. Alsop, who will soon be taking over the Vienna Radio Symphony Orchestra.

But she was not deterred in those early days, and instead got her friends together and created her own orchestra. “If you enable your friends to give you constructive criticism, it’s really empowering,” she said. That orchestra was possible because of Tomio Taki, who at the time owned Anne Klein. Ms. Alsop called him a “nonmusical mentor.” She had played the violin at his wedding. And he had supported the Concordia Orchestra for 18 years, Ms. Alsop said, even though he did not care for classical music.

In 2002, she started a fellowship for women conductors called the Taki Concordia Conducting Fellowship as a thank-you to Mr. Taki.

On Wednesday, Ms. Alsop also addressed how she had been emboldened by the recent conversation around gender equality to take on the open misogyny that occurs in her industry. “The great thing about the last two years is I feel empowered to speak out even further,” she said. “Now I feel at least I have company, and that there’s a safety net.” 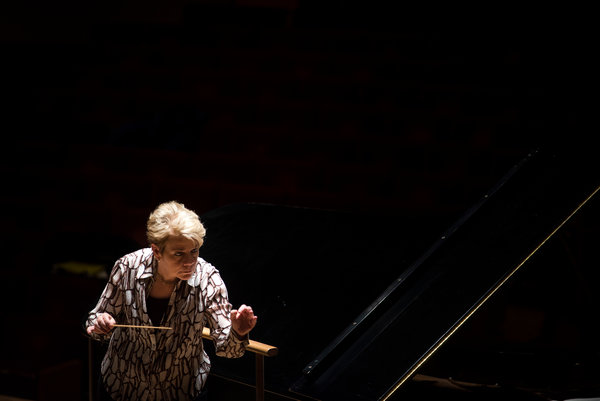 About a colleague of hers, who once made a disparaging comment about female conductors, Ms. Alsop said, tongue in cheek, “I try to take the position that I have some compassion for people who don’t think before they speak.”

Despite the progress made in recent years, she said, female conductors were still judged differently from their male counterparts while on the podium. “The thing about conducting is it’s all body language,” she said, and “our society interprets gesture very differently from men or from women.”

A delicate touch from a woman, for example, is often seen as weakness, when the same gesture from a man is seen as sensitive, she said. Unlike men, women conductors are “required to think twice about gesture because it’s not just the gesture, it’s how the musicians interpret the gesture.”

Another issue dear to her is how orchestras often do not reflect the communities in which they are based, particularly in Baltimore, where, she said, there was only one black musician in its orchestra when she started. And it is because children in underserved communities do not have the same opportunities to learn these instruments, Ms. Alsop said.

As a way to pave that road for these children, she and the Baltimore Symphony Orchestra started an after-school music program about 10 years ago. Back then, it had 30 students. Now, it has about 1,500.

“They’re going to change the face of classical music,” Ms. Alsop said of the students.

“They love classical music,” she said. “It’s a haven for them and a refuge, and a way to be themselves and see possibility.”