Meghan Markle’s conversation with Oprah Winfrey took a difficult turn when the subject of race came up, specifically surrounding the birth of her son, Archie, with Prince Harry. It’s a revelation that the palace would rather be kept a secret, but now the world knows. 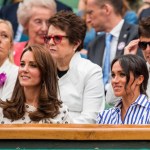 Meghan dropped the bomb that the palace was concerned about how dark Archie’s skin might be at birth — it was a revelation that even appalled Oprah. It was that concern about her son being biracial that possibly also figured into Archie not being given a title at birth. It was not their choice, it was the palace’s decision.

“There were concerns and conversations about how dark his skin might be when he’s born,” Meghan said to Oprah.

The talk show host responded incredulously, “What?! Who is having that conversation with you? What?”

“There were several conversations,” she said.

“There was a conversation with you…” Oprah continued.

Meghan jumped in, “With Harry.”

“About how dark your baby is going to be?” Oprah asked in a stunned voice.

Potentially, and what that would mean or look like,” the Duchess said.

“Ooh, and you’re not going to tell me who had the conversation,” said Oprah.

“I think that would be very damaging to them,” she summed up. That might have been one of the ugliest stories we’ve ever heard about the royal family — and Meghan saved the individual from public scrutiny even though they never saved her.

There’s one person we can probably rule out in this scenario as Meghan talked glowingly about the Queen and how positive their relationship has been throughout the ordeal. Yet it’s hard to imagine how the royal family is going to respond to such horrific allegations — all of the grandchildren should be treated equally even though they were not. It’s these slivers of insight that are showing why Harry and Meghan had no choice but to leave their senior royal roles for their family and their mental health.