For a musician, there could hardly be a more perilous task than completing works left unfinished by Mozart.

“It was bloody cheek of me to even try,” Timothy Jones said in a recent interview.

What began as a musicological lark for Jones, a Mozart expert who teaches at the Royal Academy of Music in London, has now been captured on disc. His completions of several fragments for violin and keyboard were released on Friday on the Channel Classics label, played by the violinist Rachel Podger and, on fortepiano, Christopher Glynn.

Posthumous completions are not unheard-of in the classical world. Mozart’s Requiem as it’s generally presented contains much material by Franz Xaver Süssmayr. Deryck Cooke’s realizations of Mahler’s 10th Symphony — of which only a single movement was substantially finished at its composer’s death — are widely performed, if still controversial in certain circles. Opera houses usually put on the standard completions of Puccini’s “Turandot” and Berg’s “Lulu.”

The new Mozart-Jones recording is unusual, though, in its choose-your-own-adventure approach. Jones, testing different aspects of Mozartian style, made multiple completions of each fragment, and the album includes some of that variety, giving a heady sense of how open-ended creative production is — how differently symphonies (or paintings or novels) we know and love might have ended up.

“The one big thing that came out of it for me,” Jones said, “is that it sort of dramatizes the openness of even the finished scores.” 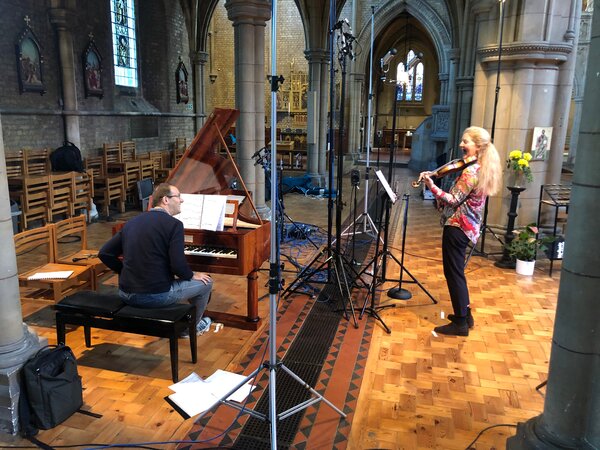 Jones got into the completions game while researching a book about Mozart’s late career. Looking into the master’s sketches — over 100 instrumental fragments survive from his final decade — and how they fit in with the canonical works, Jones became fascinated. But he wanted to deal with them in what was, for a musicologist at least, an unconventional way.

“There were things I wanted to say about these fragments which might be more easily said by dots on the page rather than prose,” he said.

He experimented with completing some chamber pieces, then a violin concerto from 1788. “It took on a life of its own,” he said, “and it’s preoccupied me for the best part of seven years now.”

The fragments were not new discoveries; they have been known since the 19th century. But more recent research, including by the scholars Alan Tyson and Ulrich Konrad, helped date them more precisely, allowing Jones to be focused in exploring the circumstances in which Mozart created them.

“Having a precise sense of the context for these fragments is what let me ask detailed hypothetical questions about what his compositional strategy might have been,” Jones said. “What was he working on, listening to, his compositional interests? That was key, because his style is still evolving really quite fast up until he died, in 1791.”

Tyson’s research, which involved close study of the manuscript paper Mozart used, suggested that one of the fragments, 34 dusky bars in the key of A, was from 1784. But the composer also used that type of paper in 1787. So Jones offers completions that might have emerged from either option, including one (more extroverted) in the style of other pieces Mozart wrote in 1784, and another (more intimate) à la 1787.

What is believed to be the latest of the violin-keyboard sonata fragments — 31 exuberant yet aching bars of an Allegro, in G — was dated by Tyson to Mozart’s final two years, well after his last completed violin sonata. One of Jones’s completions is intended to be reminiscent of the relatively straightforward lyricism of that finished sonata (K. 547, in the standard chronological catalog). Another completion, though, sees the fragment as part of a new beginning circa 1790, with more complex harmonies borrowed from the K. 590 String Quartet and the K. 595 Piano Concerto.

“Which of those paths does one bend this movement toward?” Jones said. To my taste, while the harmonically thornier, more overtly dramatic option is intriguing, the plainer pleasures of the other completion feel more properly, well, Mozartian.

But it really — obviously — could go either way, particularly since Podger and Glynn play both alternatives with a relish that draws on broad experience in this repertory. The new recording is an appendix of sorts to Podger’s eight-disc cycle of Mozart’s violin sonatas, a collaboration with the keyboardist Gary Cooper that was completed in 2009.

“When Chris and I played them through before lockdown,” she said of Jones’s pieces, “I remember thinking, Gosh, do I believe this, do I believe that? I was constantly questioning myself, because Tim hadn’t written in where the fragment finished and where the new invention began. And we did stop at one stage, and one of us said, ‘Surely that must be Tim,’ and we checked, and it was Mozart.”

In scholarly circles, the response to Jones’s work has been positive — more or less. “Some think these are useless parlor games; some are a bit more used to them,” he said. “Some people are so polite they won’t tell you to your face. There are Mozart scholars who know what I’ve been up to, and on the whole they’ve been interested. Yes, there are anxieties about doing counterfactual history. But I think of these as just pieces of criticism; they’re no different than improvising a cadenza.”

Emphasizing that he never set out to be a completions completist, Jones said he was almost done with his project posing as Mozart’s co-composer. “There are a few still interesting to me I haven’t tackled,” he said. “But I want to move on and finish the book I interrupted to do all this.”

“Putting the hubris aside,” he added, “I’d much rather Mozart had finished these pieces than I.”