Oscar-nominated actress Naomie Harris has said there’s a “very good chance” Daniel Craig will return as 007, after speculation he may leave the role.

The 40-year-old Moonlight star was speaking after she was awarded an OBE by the Queen at Buckingham Palace.

“I really don’t think that they’ve moved on from Daniel,” she said.

“I think there’s a very good chance that Daniel will come back. I think it’s way too early to be thinking about other people at this stage.” 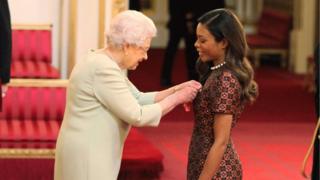 Harris, who received her OBE for services to drama, added: “I think the fact that the last two Bonds – Spectre and Skyfall – have been the highest-grossing Bond movies of all time shows that people love him as Bond, and they desperately want him to return.

“And I don’t think Daniel is immune to that… I think he’s very aware, so I think that adds an extra level of pressure. But he has to ultimately do what feels right to him.

She said collecting her award from the Queen was “lovely”, adding that Her Majesty asked her what she was working on at the moment.

In an earlier interview, Harris said that her OBE sent out “a very powerful statement” to young people from disadvantaged backgrounds.

Harris was raised by a single parent in a north London council flat.

“As a black actress from the background I came from… I think it’s incredibly important,” she told the BBC.

“I’m absolutely thrilled to have my work recognised in this way.”

Harris, who is up for a best supporting actress Oscar for playing a drug-addicted mother in Moonlight, was previously seen as Winnie Mandela in Mandela: Long Walk to Freedom.

She is also known for playing Miss Moneypenny in the last two James Bond films.

Film-maker Danny Boyle, who directed Harris in 28 Days Later and his stage version of Frankenstein, turned down a knighthood when he was offered one in 2012.

Yet Harris said she never contemplated spurning the OBE she was awarded in the New Year Honours list.

“I know some people turn down honours for their own reasons,” said the actress. “But I was not going to turn down an OBE.

“I’m always interested in spreading positive images and being a positive role model as much as I can.”

Born in 1976, Harris was raised by her mother Carmen, a former EastEnders scriptwriter who now works as a faith healer.

Harris has no relationship with her father, who left her mother when she became pregnant at the age of 19.

It’s been quite a year already for Harris, whose performance in Moonlight has seen her nominated for a whole heap of honours.

The Golden Globe and the Bafta may have gone elsewhere, but there’s still an outside chance she could win an Oscar on Sunday for her role in Barry Jenkins’ indie drama about a young black gay man growing up in Miami.

To do so, though, she will have to beat bookies’ favourite Viola Davis, whose performance in Fences has pipped hers in most of the awards ceremonies to date.

Harris herself said after her investiture ceremony: “I don’t think I have a chance of winning at all,” adding that it is “incredible” to be nominated.

Then again, there’s always a chance of an upset – as shown at the Baftas, when Lion’s Dev Patel beat Moonlight’s Mahershala Ali to the supporting actor award.

An Oscar would be a remarkable conclusion to Harris’ involvement in the film, given she shot her role in just three days and originally turned it down.

She told The One Show last week: “I’ve always wanted to portray positive images of black women and playing an addict didn’t really fall into that.”

Last month Harris was honoured at the London Critics’ Circle Film Awards for a performance that also saw her in contention for a Screen Actors Guild prize.

As far as she is concerned though, the honours, nominations and critical acclaim she and her colleagues have achieved have already done their job.

“Moonlight is about communities and characters that have been generally ignored in film, largely because people said they weren’t profitable,” she said.

“I hope people will look at the success of the film and realise there is an audience out there that is hungry to see these movies.”

Moonlight is out on general release. The Academy Awards take place in Los Angeles on 26 February.