ROME — While much of the world spent 2020 in lockdowns of varying severity, the 28-year-old Italian author Antonio Dikele Distefano had the busiest year of his life.

Along with working on his sixth novel and interviewing Italians of different ethno-cultural backgrounds for a television program, he spent months on the set of “Zero,” a show inspired by one of his novels that premieres on Netflix on April 21.

This is Dikele Distefano’s first time co-writing a television show. Until now, he has been best known for his books, gritty coming-of-age fiction, with classic themes of heartbreak, friendship and uncertainty about the future, which have become a publishing sensation in Italy. But the work of Dikele Distefano, whose parents migrated from Angola, also integrates his experiences of being a Black Italian.

And “Zero,” which refers to the nickname of the lead character, is the first Italian television series to feature a predominantly Black cast.

Dikele Distefano says he hopes that fact will only briefly be a talking point. He likes to cite “Coming to America,” the 1988 Eddie Murphy comedy that made more than $288 million at the box office worldwide, as an inspiration. “The film is so entertaining that you don’t even think about” the fact that the cast is all Black, he said of that movie in a Zoom interview this week. “For me, that is a victory.”

In his novels, Dikele Distefano takes a similar tack, throwing light on the lives of young people, the children of immigrants, who are not considered citizens even when they are born in Italy, speak the language and share the same cultural references. They can apply for Italian citizenship only when they turn 18.

The desire to change society motivates much of his work, he said, including “the idea of, in the future, having a country where my nieces and nephews can say, ‘I feel Italian.’” So far, growing calls to change the law and grant citizenship to anyone born in Italy have not gotten far in Parliament.

Dikele Distefano’s raw and emotionally open approach to his writing has struck a chord with readers of his novels. While his books are shaped by his background, they home in on universal emotional truths.

“People often say that we need beautiful stories,” he said. “I’ve always been drawn to real stories. Truth appeals to me.”

He added, “I wouldn’t be able to tell a story far from me, something that I haven’t lived or that doesn’t belong to me.” 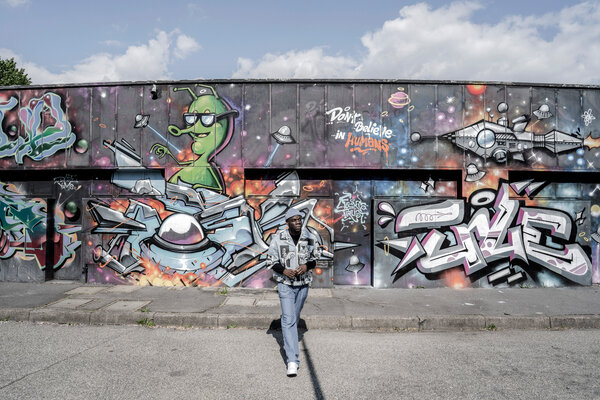 It was Dikele Distefano’s “authentic voice” and “clear language” that caught the attention of Netflix, said Ilaria Castiglioni, the streaming service’s manager for Italian original series. She said that he was the first to bring to Netflix Italy the experiences of second-generation immigrants in Italy and that “we were drawn to how he narrated his experience so naturally.”

Castiglioni said Netflix had seen a need to better represent Italy’s changing society. “A very important theme for us is representation, to create empathy, so that as many people as possible find themselves reflected in what they see onscreen,” she said.

But “Zero” is not overtly about the struggles and discriminations faced by Black Italians, she added.

“We tried to tell a story that was universal,” while recognizing the greater difficulties that Black Italians have to deal with, she said. “Our objective is to create entertainment,” she added, “and if that entertainment creates a debate, it’s a plus, but we leave that aspect to our public.”

“Zero” explores the metaphorical invisibility felt by many young people facing an uncertain future. In the figure of the main character, Omar (Giuseppe Dave Seke) an often-ignored pizza delivery guy, the metaphor is made literal: He can actually will himself to become invisible. Attempting to save his neighborhood from greedy property investors, the mild-mannered Omar becomes a community superhero, joining a group of other young people who have their own useful skill sets.

Angelica Pesarini, a professor at NYU Florence who focuses on issues of race, gender, identity and citizenship in Italy, said, “The fact that the main character is a dark-skinned Black man — already I think it’s revolutionary in the Italian landscape.”

Though racism is rife in their country, Italians are loath to admit it to themselves, Pesarini said.

“Netflix is doing a series with an almost entirely Black cast and then on the national channels you have horrific instances of racism that wouldn’t be imaginable in the United States,” she noted.

Among recent examples, an Italian actress used a racist slur during an interview on the national broadcaster in March. A few days later, a satirical program on the private broadcaster Mediaset aired an old parody of a lawmaker that also used the slur. In another skit, which aired this month, the same program was again accused of racism after the hosts made fun of Chinese people. On Wednesday, one of the hosts posted a video to apologize for that episode.

Pesarini, the NYU Florence professor, said, “I was thinking of all the Black Italian kids watching these programs,” and “hearing the N-word referred to them.”

“It was so violent for me as an adult, I can’t imagine the damage this does for someone growing up in this country as a nonwhite Italian,” added Pesarini, who is of Italian and East African heritage.

Pesarini and other activists have started a campaign, #cambieRAI (a play on the national broadcaster’s name that translates as “you will change”). She said that they had sent a letter to RAI “explaining why we were shocked and fed up and frustrated” with how Black people were represented on television in Italy. So far, there has been no response, she added.

The coronavirus set the production of “Zero” back an entire year. When Italy went into national lockdown in March 2020, the cast and Dikele Distefano decided to remain ensconced in a hotel in Rome, giving them an unexpected opportunity to bond, a chemistry that is manifest in the actors’ onscreen interactions.

“We became best friends, we still speak every day,” Dikele Distefano said. That said, the tension of working within the restraints imposed by the pandemic is something he hopes never to repeat. “I would like to work in a more relaxed way,” he said, laughing.

“Zero” has a carefully selected soundtrack. Dikele Distefano’s first forays into writing came via his passion for music, he said, and in his teens, he rapped under the name “Nashy.” In 2016, he founded Esse Magazine, a digital publication about Italian music and urban culture. “Rap was a school for me, the possibility to express what I was feeling in four-four time,” he said. When he discovered books, he gave up rap, he added, but without the music, “I wouldn’t be writing.”

Dikele Distefano worked on the script for “Zero” alongside the writers Carolina Cavalli, Lisandro Monaco, Massimo Vavassori and Stefano Voltaggio. The eight initial episodes end in a cliffhanger that seems to beg for a second season.

But Castiglioni said that Netflix had made no decision about any continuation. “For now, we’re concentrated on this series,” she said. “Let’s see how it goes and then look to the future.”