Paris Jackson is always thinking about her followers when she shares posts on her social media pages. Sometimes it’s about her music, modeling career, or dad Michael Jackson, but oftentimes it’s about giving some thought about what’s happening in her world. In a recent Instagram Story, the 24-year-old offered some personal insight as to how she’s feeling in this season of her life.

She added a stunning snapshot of herself deep in thought with her wavy blonde hair softly framing her face in a half-up, half-down style. She gazed at the camera lens as the color of her blue eyes popped in the image — and she even had a sprinkling of freckles from the filter used in the photo. Another video in the Instagram Story showed her running her fingers through her hair while a clip of Boston’s single, “Peace of Mind,” played in the background. It’s something the young star longed for in the tabloid years after her father’s death, but it seems like she has finally found that peaceful place in her life. 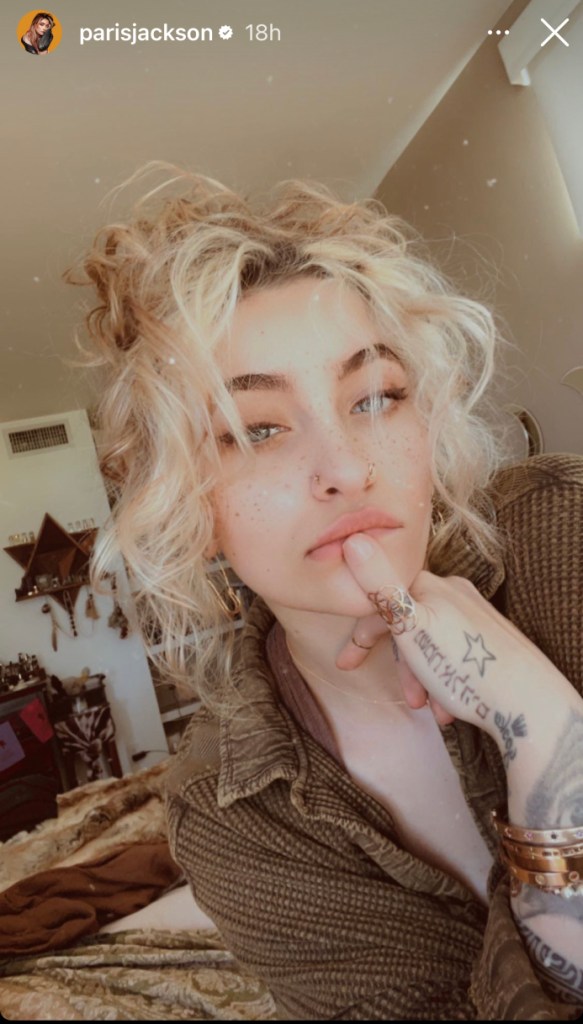 Paris has discovered a lovely way to keep pursuing her music career in her own lane, not in her father’s shadow. Yet she’s always willing to honor his legacy and remind people of how he influenced her life. “I’m obviously a fan of his music… I know all the lyrics to all of the songs and, you know, I will definitely jam out to them. But I feel like when it comes to influences, I feel like every part of my childhood will always influence how I am today,” she told Naomi Campbell in a 2021 interview. Paris revealed that the late pop star loved everything from “classical music and jazz” to “Hip Hop and R&B” and “The Beatles.” She added, “So we grew up around all of that and I feel like all of that somehow influences my stuff.”

She seems to have landed in a place that has finally brought her some serenity and given her a path to her own success. There will always be conversations about her dad, but Paris is discovering her journey in a way that works for her.

Before you go, click here to see photos of Michael Jackson’s kids over the years.