A deep and ineradicable stain is spreading over the seemingly spotless life of the woman at the center of “Something Clean,” a beautifully observed, richly compassionate new drama by the young playwright Selina Fillinger. It is not a blot that’s susceptible to the kind of scrubbing and tidying of which Charlotte Walker is a master.

Portrayed by a first-rate Kathryn Erbe, in a performance as delicate as it is heartfelt, Charlotte is the sort of woman who always packs rubber gloves and sanitary wipes in her purse. A white, upper-middle-class, middle-aged housewife, she is not a type that has shown up much in American theater lately, except in annoying supporting roles.

Nor is “Something Clean” — which opened on Wednesday in a Roundabout Underground production, sensitively directed by Margot Bordelon — a work you might expect from a rising American dramatist in her mid-20s. On its surface, this carefully arranged play feels as conventional and old-fashioned as Charlotte herself.

Yet Ms. Fillinger — whose “Faceless,” about an American jihadist, won admiring notices in Chicago in 2017, when she was only 22 — uses traditional forms to frame toxic contemporary subjects; she explores blurring tones of gray within crisp perimeters. In this case, the subject is a rape on a university campus.

We meet neither the perpetrator nor the victim of that crime, and its details remain ambiguous. But the fact of it never leaves the consciousness of Charlotte and her husband, Doug (Daniel Jenkins, excellent).

That’s because it is their son, Kai, a college basketball star, who has been tried, convicted and imprisoned, for a controversially lenient sentence of six months. And Charlotte, being Charlotte, feels an urge — as inescapable as a conditioned reflex — to clean up the incalculable mess that’s been left behind. 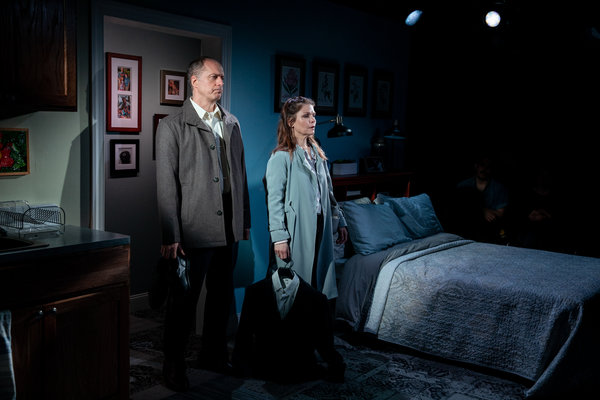 And so she shows up to volunteer at a sexual assault counseling center. Known as Lottie at home, she calls herself Charlie here, and she somehow (a bit improbably) manages to avoid divulging her last name. Under the warm wing of Joey (Christopher Livingston), the young, African-American gay man who runs the center, she finds a refuge from the life and family she is no longer sure she knows.

In description, “Something Clean” can bring to mind a topical television movie of midlife awakening and redemption. Ms. Fillinger doesn’t exactly subvert such formulas. Instead, she bends and blurs them, to explore both the porousness of social boundaries and the pervasiveness of guilt. Reid Thompson’s set would seem to be divided into two self-contained parts, with Charlotte and Doug’s home on one side of the stage, and the help center on the other.

But as the play proceeds, in alternating and often elliptical scenes, you can feel these two spaces melting into one. (Jiyoun Chang’s lighting makes the most of overlapping shadows.)

There’s a third location, too, initially hidden from view — the campus alley in which the rape occurred, behind a dumpster. It is a place Charlotte sometimes visits late at night, like a restless ghost.

The structure works symbolically. But it wouldn’t count for much if Ms. Fillinger didn’t support it with fully drawn characters who are all, in different ways, defined by sexual shame. The dialogue here is remarkable for naturally melding essential exposition (including sociological statistics) and personal, idiosyncratic perspectives.

In one memorable exchange, after Doug has said he thinks he’s a good kisser, she replies, “How do you know?” She’s asking how we can really tell what physical affect we have on others, even on people with whom we’ve been intimate for years.

This new, questioning spirit is partly inspired by her friendship with Joey, played by the engaging Mr. Livingston with a chipper self-assurance that becomes shakier. Molested as a child by a male babysitter, Joey, now 24, is in a stable relationship with an older partner.

Charlotte, examining her confining marriage, is beginning to think that stability is overrated. She grows bolder in sharing this belief, with disruptive consequences.

For an 80-minute play with a cast of three (Mr. Jenkins and Mr. Livingston double in other roles), “Something Clean” covers a remarkable amount of ground. Some of its plot contrivances creak a bit, especially in the final collision of Charlotte’s segregated worlds.

But in focusing on the ripple effects of a sex crime on one unextraordinary life, “Something Clean” keeps readjusting our point of view, along with Charlotte’s, on the widespread implications of such acts and the nature of the culture in which they occur.

Her Charlotte has the aspect, both stunned and energized, of someone abruptly awakened from a narcotized life. Being conscious hurts, but it’s exciting, too. Ms. Erbe’s translucent performance is poised at the bright, disorienting intersection of pain and wonder.

Tickets Through June 30 at the Black Box Theater at the Harold and Miriam Steinberg Center for Theater, Manhattan; roundabouttheatre.org. Running time: 1 hour 20 minutes.

When you purchase a ticket for an independently reviewed play or musical through our site, we earn an affiliate commission.

This information was last updated on April 6, 2019

Ben Brantley has been the co-chief theater critic since 1996, filing reviews regularly from London as well as New York. Before joining The Times in 1993, he was a staff writer for the New Yorker and Vanity Fair.