Theatergoers don’t often get to boss performers around. I’ll be frank: It’s fun.

At least it was fun during the streaming show “Readymade Cabaret 2.0,” when the audience turned Jonathan Matthews — who wore a fool’s hat, bells jingling — into a collectively animated puppet. First, we led him through an “aleatory music” session in which he had to use a cheese grater to produce sounds. He was asked, for example, to “lick” and “pluck loud.” Told to “encourage,” he cooed “You’re doing great” to his kitchen tool.

The director, Erin B. Mee, also instructed us on how to lead Matthews through a so-called chance dance: Audience members used the chat function to type in a body part, an action and a number of repetitions, and Matthews executed the prompt. He threw himself into the dance — which was no small feat considering that the directives, fast and furious, included the likes of “booty, twerk, 3” and demanded that he basically choreograph his neck or eyebrows.

This is what happens when experimental theater fans become drunk with power.

As silly as this all was, “Readymade Cabaret 2.0” was trying to say something about fate (a word that came up repeatedly), narrative convention and the process of making art. Alert readers will have spotted the nod to Marcel Duchamp’s readymades in the show’s title and to René Magritte in This Is Not a Theater Company, the name of this troupe, run by co-founders and artistic directors Mee and Jessie Bear. References to the Dada movement abounded in Mee’s interventions throughout the performance.

In addition to occasionally telling a performer what to do, audience members set the order in which the show’s components — short scenes (written by Bear), dances, musical bits, computer-generated poetry — were executed. We could raise a virtual hand to roll virtual dice, and the cast of six would perform whatever scene had been assigned to the resulting number. 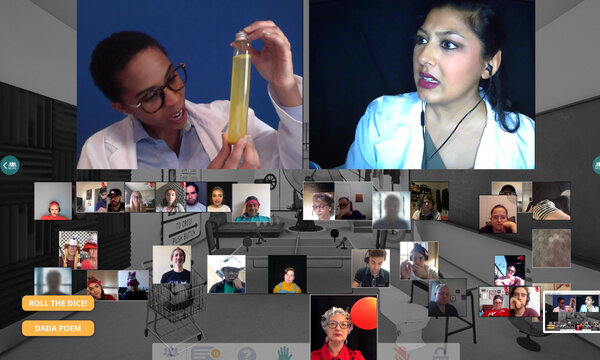 Randomness as a devising method has long been part of the experimental playbook: Merce Cunningham’s chance operations, John Cage’s indeterminate music. The technique penetrated the Off Broadway scene with the Neo-Futurists’ long-running show “Too Much Light Makes the Baby Go Blind.” And it is common on the internet: Just think of all those random generators.

“Readymade Cabaret 2.0” — a physical version of which premiered at Judson Memorial Church five years ago — reflects the company’s interest in pondering the nature of art by using immersion and interactivity, as evidenced in earlier productions like “Pool Play 2.0” and “Play in Your Bathtub.” Emailed instructions for signing in included tips for making a drink such as “Choose two liquids to which you are aesthetically indifferent” and “Garnish randomly.” And the event takes place on the platform Shindig, whose bells and whistles allow for playful, gamelike communication.

But this production, cut off from the weight of consequences, eventually started going in circles: It’s easier to ask someone to perform ridiculous moves when that person is disembodied and distant, weakening the cause-and-effect link between prompt and performance. When the stakes are low and everything is a goof, it all melds into an aesthetically indifferent cocktail.